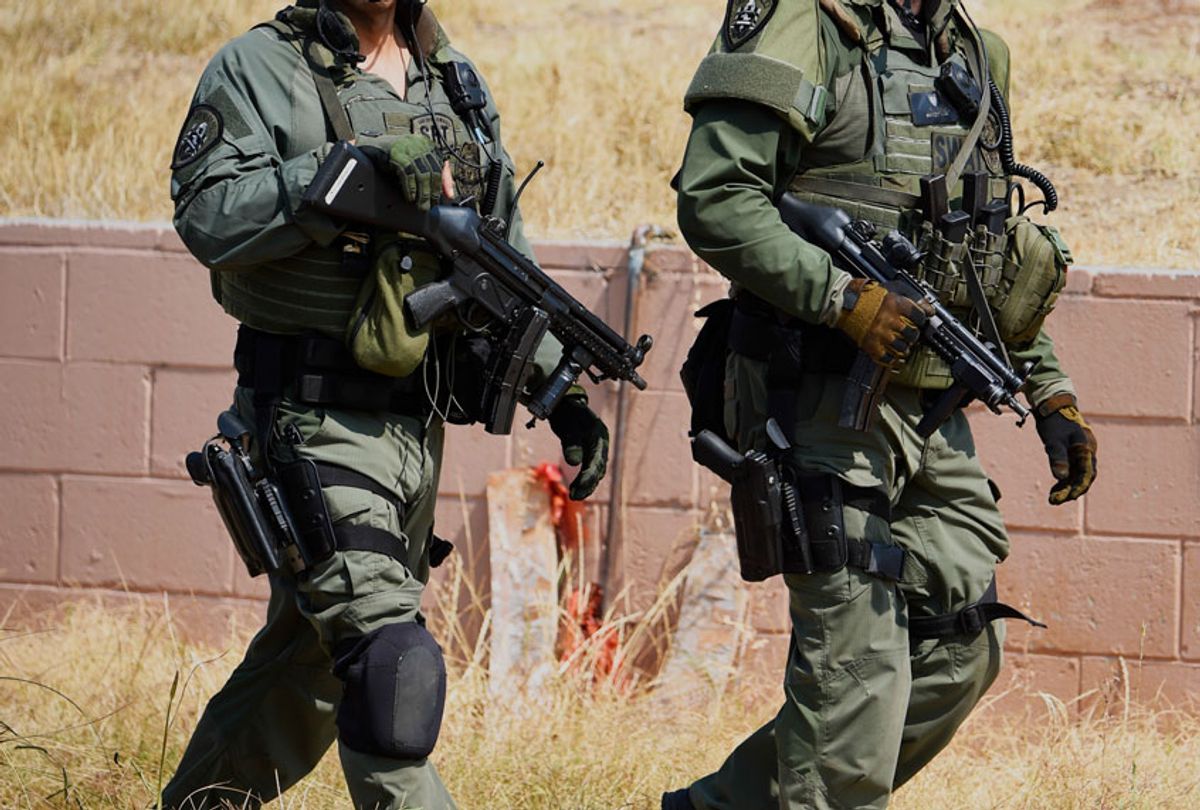 Andrew Finch, a 28-year-old father of two, was shot and killed after walking out of his front door. The police officer who fired the weapon was part of a SWAT team called out to what they believed was a violent situation that involved a shooting and kidnapping. It turns out the emergency call to authorities was just a hoax, and Finch an innocent victim.

The story has been covered widely since it happened on Dec. 28 in Wichita, Kansas. The suspected prankster has been arrested, his criminal background repeatedly cited, and one headline after another has branded “swatting” as a deadly prank. “Swatting” is when someone calls emergency services anonymously to report a fake situation with the intention of getting a SWAT team or large police presence to respond to the address given.

But is it the “swatting” that’s deadly, or the police officer who pulled the trigger?

“There’s a reason why swatting is such an effective tactic,” said Kade Crockford from the ACLU of Massachusetts in an interview last week for “Salon Now.” “It’s because police departments across the country have largely, in the dark, militarized to the extent that they are really hair-trigger ready to be deployed by a malicious actor like this in a prank that unfortunately, in Kansas, ended in someone’s death."

SWAT teams are primarily used in the war on drugs, often in lower income and minority communities. An ACLU study from 2014 found that 80 percent of the raids they analyzed were carried out to execute a search warrant. The allegedly violent incident that police were responding to and the amount of media attention paid to the raid in Kansas makes it an outlier.

“This is obviously a very highly publicized SWAT raid that ended very badly. SWAT raids end badly all the time in the United States,” said Crockford.

Watch the full interview with Crockford in the video below to hear more about the ACLU's findings.

The government doesn’t keep across-the-board statistics on SWAT raids, but a New York Times investigation found that at least 81 civilians and 13 law enforcement officers died in raids of this kind from 2010 through 2016, with many others maimed or wounded.

“We really have to look at police department policies and procedures with respect to what happens after those SWAT teams are deployed,” said Crockford. “We have to ask, as a society, what are we doing or not doing at a systemic level that enables these kinds of mistakes to take place.”

Despite a renewed national focus on excessive police force, thanks in large part to the Black Lives Matter movement, courts have shown that the law usually sides with the officers involved if they believed their lives were in danger.

Radley Balko has written extensively about police militarization and no-knock raids. In his latest article at the Washington Post about the Kansas incident, he wrote about the conditioning of police to believe they are increasingly under attack, despite statistics showing the opposite to be true. “It puts lives at unnecessary risk. It increases the chances that a police officer will see an innocent gesture as a furtive one,” wrote Balko.

As much as “swatting” is a waste of public resources and an atrocious prank that deserves attention, it’s irresponsible and disingenuous to leave police accountability out of the conversation about the case in Kansas.