Better than Led Zeppelin: A little-known recording proves the Yardbirds were the real metal pioneers 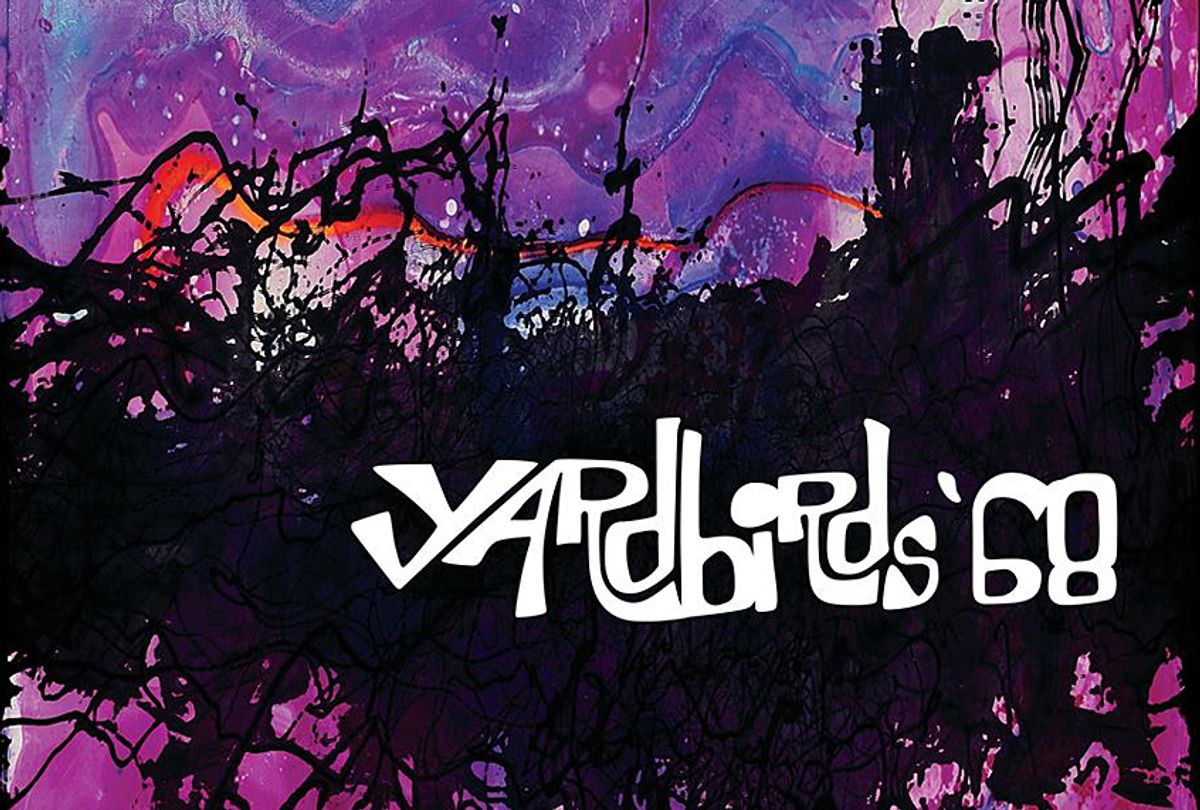 Yardbirds '68 by The Yardbirds (Columbia Recording)
--

I’m going to preface this argument about a recording I bet you’ve never heard by saying that there is not a Led Zeppelin bootleg I don’t own, because they’re a band that I’ve been listening to almost as long as I’ve listened to anyone.

Which, I realized long ago, is kind of weird, because I don’t think Zeppelin is very good. They’re an act that it feels like you ought to like. There’s the long concert career, so if you like live recordings, like I do, there’s plenty to go on. The mythology angle is neat-ish, the early purveyors of heavy metal bit is easy to get on board with, there’s a degree of virtuosity, but it just seems to me that Zeppelin is a classic gateway band.

That is, you think that no one in the world could be better at what they do when you’re 14, 15, 16. Same goes when you read "Catcher in the Rye" at that age. You haven’t been exposed to much; your sensibilities are exceedingly raw; you like things that later seem obvious, on the nose, redundant: lots and lots of histrionics, a Zep special, for instance, and that Zep brand of what I think of as Mega-Drama, with stairways to heaven and Gollum and what not. Then there is the banshee wail singing style that Robert Plant has going for him that makes you feel like a badass yourself as you get prepped for that big end-of-semester ninth grade dance.

I realize that I’m going to get dragged into the proverbial town square and all but Robespierred for this, but here are my Zeppelin problems: They couldn’t write a song with any of the dexterity of their contemporaries, they endlessly pilfered from the blues, Plant was a limited singer who sounds like a witch, Jimmy Page got lazy with the endless guitar overdubs and ceased innovating on his instrument, and John Bonham drummed without any of the fluidity of a Keith Moon or Ginger Baker or, for that matter, Ringo Starr. Just booming, booming some more, booming away. Their music was leaden, not pliable, like some large dinosaur coming at you who had to completely stop, gather itself for some minutes, and work to reposition its whole body just to go off, lumberingly, in another direction the second you changed course.

This is from someone who likes them. I just don’t think it’s great art. Fun at times, and those early boots like "Live on Blueberry Hill" from the LA Forum in 1970 are a hoot, better than anything they released officially on record. Zeppelin was crucial for me because they helped hook me hardcore into rock, and once I opened up my ears to other acts, I found worlds of richness that offered so much more. And to those worlds I went. But I never ditched the Zep entirely; I just realized that they were there to help you find better things, provided you were someone who evolved in your tastes and passions. That doesn’t mean you can’t think they’re the best band ever, doesn’t mean we can’t agree to disagree. But I would not budge an inch that the band that this far more famous band grew out of wasn’t 50 times the group they were.

I’m talking about the Yardbirds, whose story and that of the early Zep overlapped for a period in 1968, as we can hear on the excellent new release, "Yardbirds ’68," available exclusively on Jimmy Page’s website. The Yardbirds are our most stratified band. To give a quick recap/breakdown of their various layers: From 1963 to 1964 they were straight-up blues rockers, not unlike the Rolling Stones, with Eric Clapton playing lead guitar early in his development. They had a hit with “For Your Love,” which you still hear on the radio, but this pissed off Clapton, who thought it not sufficiently bluesy — it was only a touch bluesy — and quit, to be replaced by Jeff Beck.

From 1965 to 1966, this installment of the Yardbirds did things that put them up there as what I’ll call one of the 10 best groups ever. They blended feedback control, Eastern modalities, social commentary, English vaudeville, Georgian chant, early heavy metal, virtuosic harmonica playing and jazzy interplay by way of the interstellar experiments that groups like the Byrds were trying. At the end of this period, Jimmy Page, ace session musician, came on board. First he played bass, then he played, briefly, co-lead guitar with Beck.

Not long after, Beck pulled a mini-nutty and left, and in 1967 the Yardbirds became this very odd bubble gum rock type band produced by Mickie Most (dude who worked with Herman’s Hermits), with a heavy metal guitarist adding effects in the background and unleashing some insane solos. We come then to 1968, when they ditched that, went the full super-charged blues rock/heavy metal/improvisation route.

1968 featured a lot of volume in rock and roll: Cream, the Who, Hendrix. Blue Cheer, if you like. But I am not sure you could have been much louder than this last-gas iteration of the Yardbirds. Page was setting up Zeppelin, which meant jettisoning Yardbirds singer/harmonica player Keith Relf, bassist Chris Dreja and drummer Jim McCarty. You know the rest.

But first there was a gig at NYC’s Anderson Theater on March 30, 1968. Epic recorded said gig, and released it in 1971. Page, who was soaring high with Zeppelin at the time, wanted nothing to do with the show, which featured applause dubbed in from, of all things, a bullfight. The three-year delay in release was clearly indicative of a Zeppelin cash-in, but there is one other going concern: This band, from 1968, pastes the more famous band in 1971.

The new release ditches the fake applause, and earmarks itself as one of the top-tier live albums of its era, the sound of heavy metal birthing itself on a stage. Hendrix was something else — he had as much John Coltrane in him in his sonic explorations, as much Paganini, too, but with far more intellectual heft. The last-gasp Yardbirds, as heard on this tape, were building sonic structures that had enormous rock-quarried bases courtesy of a gargantuan, but malleable, rhythm section that could pivot and turn and rush forward upon being cued with a single chord from Page’s guitar. They were like a herd of Egyptian pyramids with gymnastic capabilities charging toward your ears.

Post-1970 Zeppelin always feels cavernous to me on the stage, whereas these Yardbirds trafficked in intimacy, for all of the volume. From their earliest days, they pioneered what they termed a rave-up, in which the band would start working a series of notes at low volume and low speed, building louder and faster, until, in essence, a musical orgasm was at hand. Those rave-ups last longer on the Anderson Theater tape, as if we are in an extended session between band and audience.

The opening “Train Kept A-Rollin’” establishes the band’s sheer power. Page’s guitar seems to be omnipresent, at first to your left, then behind you, then leading the way out in front. This is big-time fretboard nimbleness, lighting fingers. As impressive is Relf’s harmonica. He wasn’t a traditionally great singer, but I think of him as the vocalist version of Theodore Dreiser the writer — not technically proficient, maybe, but paradoxically efficacious in emoting in spite of, and maybe because of, those technical limitations. But as a harp player? It would take the likes of Little Walter to best Relf, and Walter played blues harp at the level Charlie Parker played alto sax.

You will recognize “I’m Confused” as what later turned into Zep’s “Dazed and Confused,” which took itself so very seriously. “I’m Confused” has more verve, more punch, again with that pliability. It also has one of the finest guitar solos of what was an annum of mighty guitar solos. The rhythmic contortions of the metaled-up version of “Over, Under, Sideways, Down” from the Beck years are pure riff-y bliss, and then we have the behemoth-in-waiting of the closing “I’m a Man.”

A lot has been done to “I’m a Man” over the years, with the litany of cover versions. Often, it was a proving grounds for white rockers who wanted to try and hang with the black bands that preceded them. Usually, they could not. Listen to the Who try and sound all grown-up and tough with their version, for instance. But this late Yardbirds offering is a paragon and paradigm of what metal could do, with a band that had gelled, a band in essence saying, “screw it, let’s see how far we can go in the time we have left.”

The in-song rave-ups border on the too intense, if that’s even possible, but what sweet succor those eventual releases provide. The band hits a peak, and, what do you know, they’re ready to go again. We are talking matchless recovery time, we are talking a live album that doesn’t just take its seat at the table, but upends the table, pushes in a new one, and says, right, Zeppelin, you may come sit with us, if you please, not the other way around.