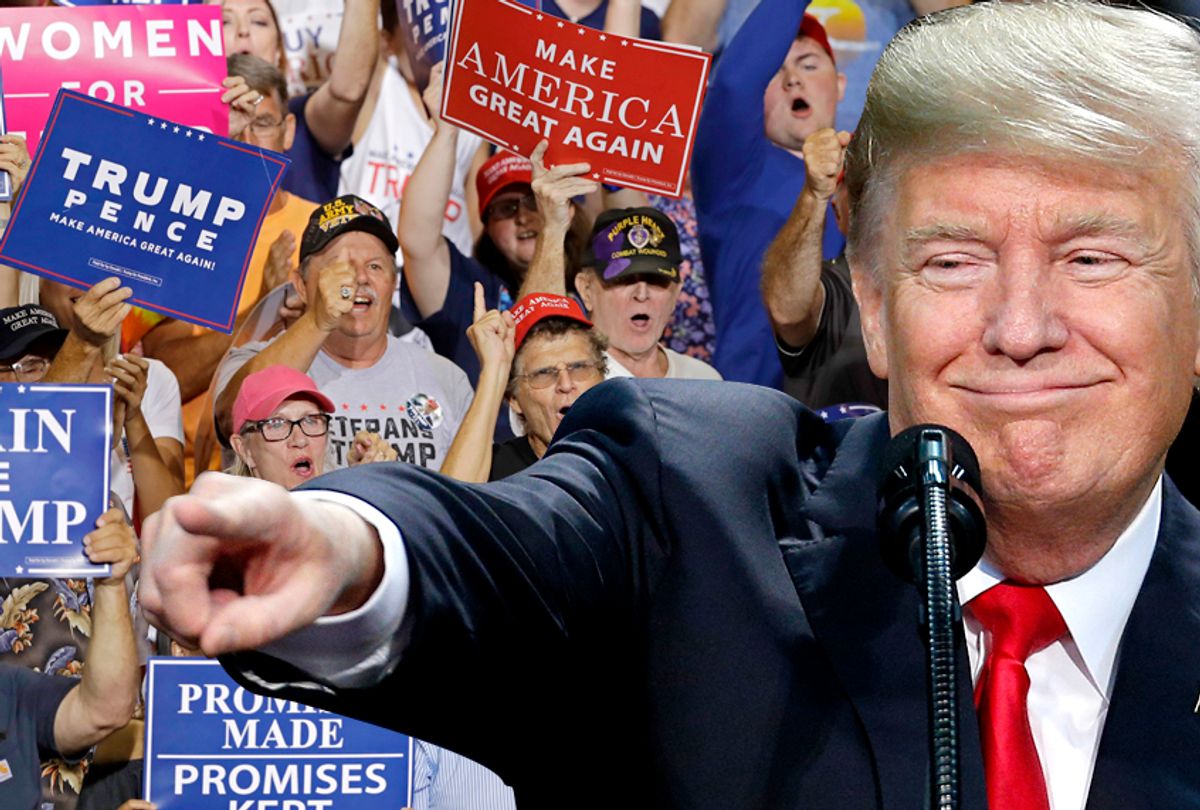 From the safety of their redoubts in such great American cities as New York, Los Angeles and Chicago, the corporate news media continues to send its brave reporters out into the hinterlands of TrumpLandia. Following Trump's shocking win in November 2016, the media elite has been insatiable in its curiosity and desire to better understand the "white working class," who supposedly swept the president into office. The fixation on these strange and seemingly unknowable people -- at least unknowable to the media elite -- will continue unabated in the year 2018.

In one of the last expeditions of 2017, the Associated Press profiled Trump supporters in Sandy Hook, Kentucky. What did reporter Claire Galofaro discover about these denizens? They still view Trump as their hero and savior:

Everyone in town comes to [Steven Whitt's] diner for nostalgia and homestyle cooking. And, recently, news reporters come from all over the world to puzzle over politics — because Elliott County, a blue-collar union stronghold, voted for the Democrat in each and every presidential election for its 147-year existence.

Until Donald Trump came along and promised to wind back the clock.

“He was the hope we were all waiting on, the guy riding up on the white horse. There was a new energy about everybody here,” says Whitt.

These Kentuckians apparently retain an attachment to Trump that is emotional -- fueled by rage and a desire for vengeance for the pitiable life circumstances they find themselves stuck in:

Despite the president’s dismal approval ratings and lethargic legislative achievements, he remains profoundly popular here in these mountains, a region so badly battered by the collapse of the coal industry it became the symbolic heart of Trump’s white working-class base.

The frenetic churn of the national news, the ceaseless Twitter taunts, the daily declarations of outrage scroll soundlessly across the bottom of the diner’s television screen, rarely registering. When they do, Trump doesn’t shoulder the blame — because the allegiance of those here is as emotional as it is economic.

It means God, guns, patriotism, saying “Merry Christmas” and not Happy Holidays. It means validation of their indignation about a changing nation: gay marriage and immigration and factories moving overseas. It means tearing down the political system that neglected them again and again in favor of the big cities that feel a world away.

On those counts, they believe Trump has delivered, even if his promised blue-collar renaissance has not yet materialized. He’s punching at all the people who let them down for so long — the presidential embodiment of their own discontent.

They believe Donald Trump is a victim. They have also been fully brainwashed by Fox News and the right-wing echo chamber. One man interviewed in the story, a registered Democrat named Wes Lewis, says he trusts Trump for his "values" and believes he will keep his promises. "If the factories and mines don’t come back," Lewis will blame Democrats. "If there isn’t a wall on the Mexico border, he says, it won’t be because Trump didn’t try. If investigators find his campaign colluded with Russians, it’s because so many people are so determined to bring him down. . . . The people against Trump are, by extension, against people like him, too, Lewis figures."

These dispatches from TrumpLandia make for entertaining reading, combining crude anthropology with the cheap thrills of a political freak show. But this genre of writing, like the mainstream media that produces it, reflects the same errors in logic and reasoning that helped Donald Trump to win the White House.

What of the tens of millions of Americans who voted for Hillary Clinton -- a candidate who won the popular vote, was hobbled by unfair coverage in the news media and undermined by Russian interference on behalf of Donald Trump? These Americans have every right to feel that their vote was stolen from them and that an illegitimate usurper now occupies the White House. Yet such feature essays about their feelings and struggles are for all practical purposes nonexistent in the mainstream American corporate news media.

What of the fact that most voters who identified the economy as their primary concern actually voted for Clinton and not Trump? Moreover, what about the "working class" -- meaning not just white Trump voters but members of that socioeconomic group as a whole -- and "poor" voters, who are much more likely to vote for Democrats? What do we know about the black and brown folks, as well as white liberals and progressives, who are trapped behind enemy lines in TrumpLandia? What are they experiencing?

What of the fact Donald Trump won every category of white voters: rich or poor, "poorly educated" or otherwise?

Ultimately, any reporting about the "white working class" that does not explore the racism, nativism and white supremacy that drove that group's support of Trump is both inaccurate and irresponsible.

In total, these are important facts and questions which most voices in the mainstream media are quick to discard. They do not fit into simple stories about the strange and interesting people of TrumpLandia and about what this political moment actually reveals about the fissures and fault lines in American society.

All hope is not lost. There are some voices who are trying to tell the truth about what really motivated Trump's "white working class" voters to support him. British writer Gary Younge traveled throughout the United States over the course of 2017. What did he learn about Trump's white voters? As Younge put it to the Nation, "whiteness is all they’ve got." W.E.B. Du Bois understood this in 1935. Lyndon Johnson explained it in 1960. Donald Trump manipulated that psychological investment in whiteness to win a presidential election in 2016.

Donald Trump's "white working class" supporters are not nihilists. The denizens of TrumpLandia are not that ideologically disciplined. What they want is more things, more power and more control over nonwhites. They want to restore a sense of self-esteem based not in a sense of shared human dignity and worth with their fellow Americans but rooted in racial tribalism and a sense of group superiority.

When they hear "Make America Great Again," Trump's supporters correctly decode it as making America white again. If a person's most valuable possession is their whiteness, that becomes a great and enduring motivation to support Donald Trump. Until the mainstream corporate media accepts that basic fact, it will continue to be blindsided by the forces unleashed and nurtured by Donald Trump and the Republican Party. But at least they will always have bizarre stories to tell about the strange denizens of TrumpLandia.