Again, women were left to do the heavy lifting by men more eager to talk about themselves 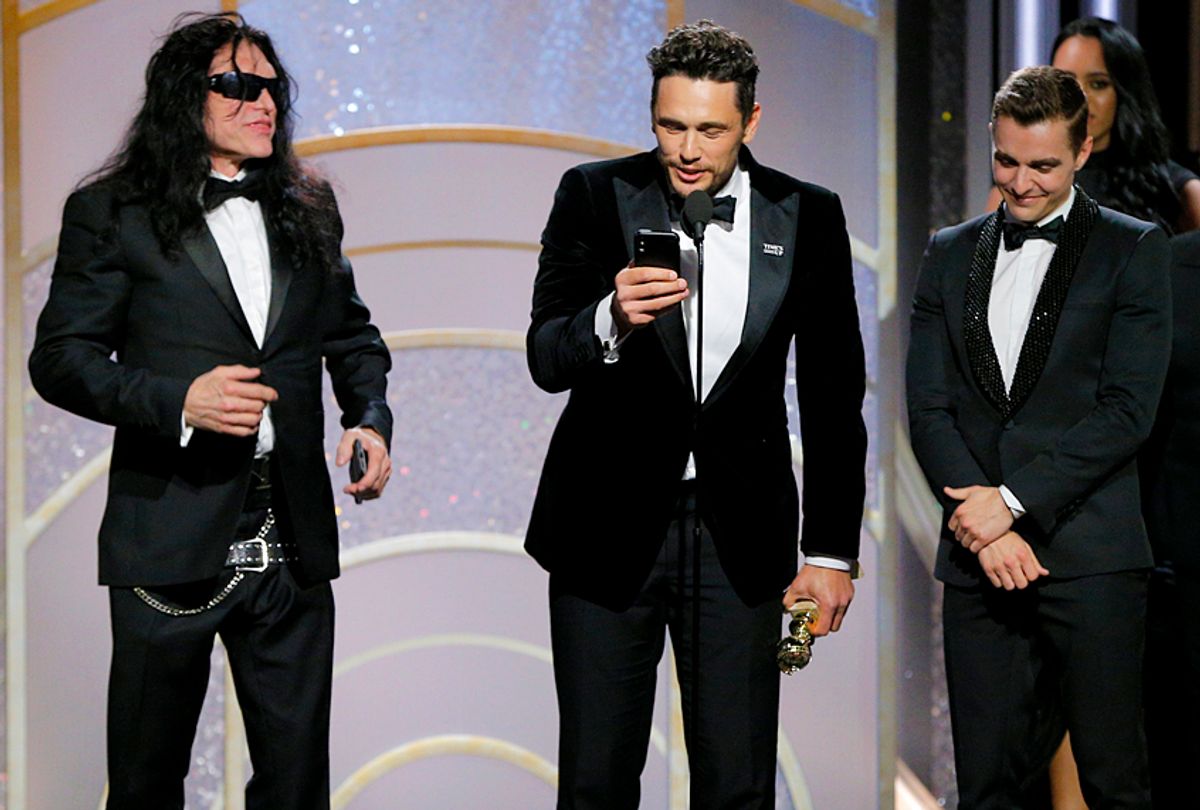 James Franco, with Tommy Wiseau and Dave Franco, accepts the award for Best Performance by an Actor in a Motion Picture – Musical or Comedy for “The Disaster Artist” during the 75th Annual Golden Globe Awards January 7, 2018 (Getty/Paul Drinkwater)
--

The chief visual of the 2018 Golden Globe Awards ceremony Sunday night was an ocean of both women and men dressed in black. But the gowns and tuxes were mere T-shirt activism compared to the ways in which many of the women entertainers in attendance honored those inside and outside of Hollywood who tirelessly battle a culture that has allowed sexual harassment and assault to run rampant.

Women stars took activists as their dates. Oprah Winfrey, Laura Dern, Nicole Kidman and others spoke emphatically and empathetically about the importance of supporting survivors, of working towards an equitable world where "nobody ever has to say 'me too' again," as Winfrey put it. Along with Natalie Portman's canny disruption of the best director category, #MeToo was front and center all night.

Well, it was front and center for women.

While the men donned black and "Time's Up" pins, when each male winner of the evening took the stage and gazed out into that ocean of women dressed in black, they said nothing of #MeToo.

James Franco accepted the Golden Globe for best actor – motion picture musical or comedy for "The Disaster Artist" and brought Tommy Wiseau onstage, but spoke mainly of himself. Guillermo Del Toro scolded the orchestra for cutting him off during his acceptance speech for best director for his film "The Shape of Water." Yet, with the extra time he fought for and received, he said nothing of #MeToo — this, even after Natalie Portman quipped "here are the all-male nominees" during the presentation of the award.

Alexander Skarsgård, who played Kidman's abuser in "Big Little Lies," failed to acknowledge the reckoning taking place in Hollywood or even the show's themes. He did commend the "extraordinarily talented" women he worked with on the series, co-stars who chose not to stay silent. Similarly, Martin McDonagh, who won best screenplay for "Three Billboards Outside Ebbing, Missouri" didn't find it necessary to connect his film, about a mother's crusade for justice for her daughter who was raped and murdered, to the many women in the audience who also publicly disclosed their own experiences of sexual assault and abuse.

In all fairness, Aziz Ansari seemed genuinely surprised that he was awarded the award for best actor – television series musical or comedy and commented on his disbelief. And yet, this actor, writer, producer and director who has shown an understanding of women's issues in "Master of None" didn't evince any such appreciation on stage. Sterling K. Brown, the first black man to win a for best performance by an actor in a television series – drama, spoke powerfully about his history-making win, but not, as it turns out, the other history-making issue of the night.

Certainly, almost all of them offered at least some words about Time's Up on the red carpet or offstage after their wins. But much of that was mealy mouthed and, more to the point, after their true turn in the spotlight. Whether or not these men were indeed true believers in the movement going on all around them — and it's easy to imagine that many of them were — they did not feel the pull to address the crowd in black about it. Almost all the female winners, however, did.

As Sophie Gilbert from The Atlantic wrote, "Women were largely left with the labor of explaining why wage parity matters, and why telling diverse stories matters, and why having more women and people of color occupying positions of power in all industries in America matters."

Last night's Globes made clear that #MeToo isn't a Hollywood movement, but a movement among women, some of whom happen to work in Hollywood. The rest of the industry may clap when someone makes a Harvey Weinstein joke, but they're standing up to be counted.

It has always been the unfortunate case that the oppressed are tasked with liberating themselves from oppression. Here, despite "the shift" or "avalanche" that many people are keen to cite right now, that dynamic has not changed. Women, it seems, are charged with upending a system they did not create. Men, on the other hand, are free to talk about themselves.

Host Seth Meyers made a few good jokes, calling Weinstein "the elephant not in the room." But when it came to the winners of the evening, who the Globes laud as Hollywood's most talented and exceptional, the men failed to acknowledge #MeToo, even with Time's Up pins attached to their lapels while facing a room full of women dressed in black who used the entire event to assail a deeply flawed system.

And, really, no one was asking for much. "I hear you," "I believe you," "I'm listening" would have been enough.