Is the War on Christmas really a proxy war for white supremacy? 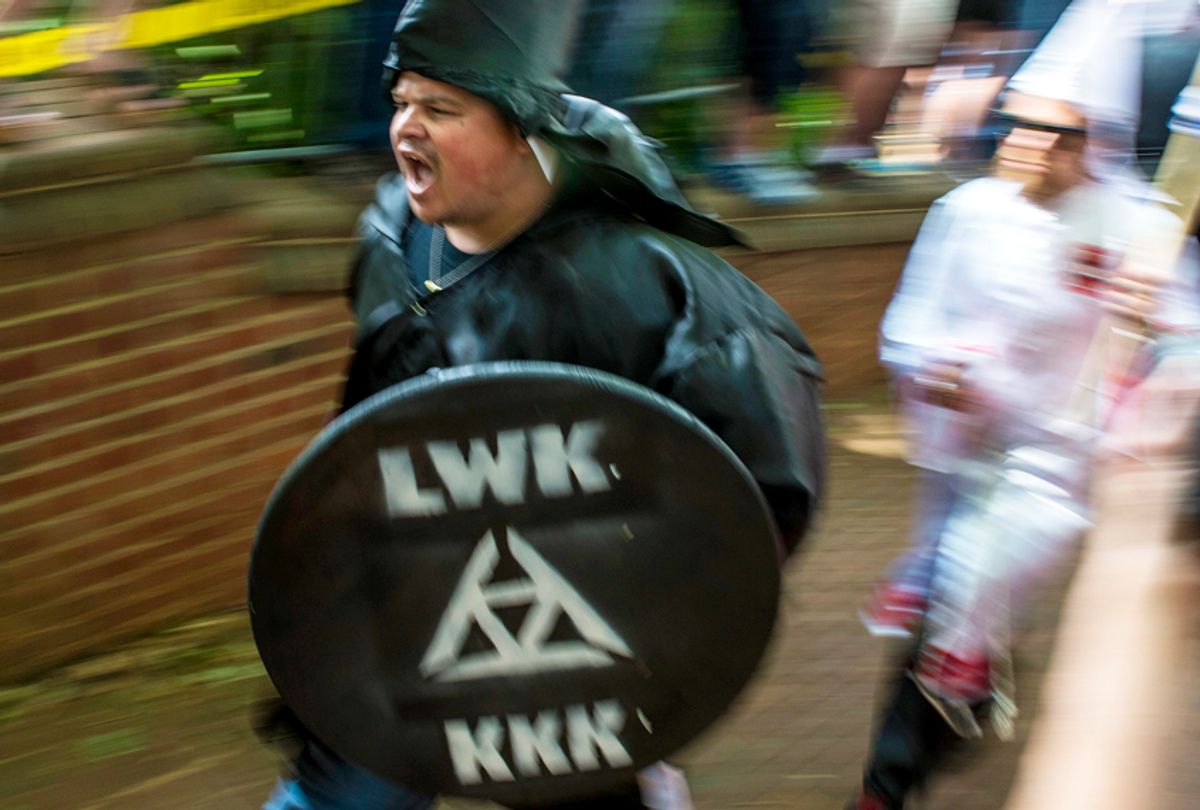 The War on Christmas is a myth. Yet so many Republicans, Donald Trump voters and other conservatives are apparently obsessed with it. Why is this?

Today's conservative movement is masterful in its ability to use emotional appeals to manipulate its public with the goal of achieving and maintaining political power. As Richard Hofstadter observed more than five decades ago, American conservatives are also anti-intellectual and especially prone to believing in conspiracy theories.

Movement conservatism also has a deep disdain for facts. Empirical reality is an obstacle and inconvenience that stands in the way of advancing a political worldview that operates more like a religion than an ideology based in reason and fact.

Republicans and the conservative movement also command Fox News and a right-wing echo chamber that function as one of the most effective propaganda operations in modern history. Republican voters have literally been conditioned and trained by their news media and other trusted voices to believe things that are not true.

There is the power of weaponized religion in the form of right-wing Christianity, whose adherents believe that they are oppressed in America by liberals, gays, Muslims, atheists, "secularists" and any other group identified as an enemy other. Of course this is not true: white Christians are the most powerful and dominant group in American society. But again, the allure of Christian fascism -- and contemporary American conservatism -- is rooted not in reason but rather in fantasy.

There is another dimension to the "War on Christmas" and the broader right-wing obsession with the culture wars. Both are examples of white identity politics and a deep desire (and effort) to maintain the cultural and political power of white right-wing Christians over all other groups. In many ways, the War on Christmas is actually a proxy war for white supremacy.

How is white supremacy advanced by the right-wing "culture war" narrative? How are Donald Trump and the Republican Party using the "War on Christmas" to advance their goals? Why are so many white Americans attracted to such fictions? Is Donald Trump a white supremacist, or are his views best described in some other way? How are young white men and others being radicalized into violence by white supremacists and other right-wing groups? Is it possible for white people to divest themselves from white privilege, or whiteness more generally?

In an effort to answer these questions, I recently spoke with University of Oregon sociologist Randall Blazak. He is one of the country's leading experts on the neo-Nazi and white supremacist movement. Blazak also spent several years infiltrating and studying neo-Nazi skinheads and other white supremacist hate groups. He is the author of several books and is also the chair of the Oregon Coalition Against Hate Crime.

A longer version of this conversation can be heard on my podcast, which is available on Salon’s Featured Audio page.

How do you think Donald Trump was able to win the presidency?

America has experienced huge demographic changes in the last 50 years.

For a lot of people, it’s great. There are more opportunities, especially if you’re a woman or a person of color or you’re a gay or transgender person. These are exciting developments.

But there are a lot of people who feel left out by all those changes. This is especially true of straight, white, working-class men who feel that their picture of the American Dream is gone. They are right. It is gone. There is a much more even playing field in America and those men feel a loss of status. When I started studying skinheads in the late 1980s, they were responding to the first wave of Reaganomics -- people being laid off from the factory as well as policies such as affirmative action and gay rights. White men, especially the "white working class," were seeing this assault on their status.

I believe it was CNN that asked candidate Trump, “When is the 'again' in your slogan: Make America Great Again”? He said it was the early 1950s. Of course, for a lot of Americans, it wasn’t great in the early 1950s. Gays and lesbians were forced into the closet and women were forced into drudgery. Jim Crow ruled the land. America in 1952 was not a great country. But if you were a straight, white working-class male, you had the American Dream unchallenged. That is the nerve that Trump touched and it explains both his popularity and the public resurgence of white supremacists.

What are the white men who voted for Donald Trump and support the Republican Party and the "alt-right" upset about? White men are the most powerful group in the country, if not the world. Why the rage?

It’s largely about perception. If you think about the concept of white privilege, it is largely invisible to those who benefit from it. When the realities of white privilege are pointed out and the bubble of "meritocracy" and "hard work"  is punctured it feels uncomfortable. The privileged like the bubble. One of the beautiful things about privilege is not having to confront the fact that you have an unfair advantage. It doesn’t mean you’re a bad person; it is just a reality that has to be acknowledged. A lot of white people get very defensive because they think it’s about their character and that somehow they’ve done something bad.

Are you surprised by the ways the language and beliefs of neo-Nazis and white supremacists have been mainstreamed by Trump, the Republicans and the right-wing media?

Several years ago I tried to sound the public alarm about the Tea Party movement and how its narratives and logic were similar to that of white supremacists. For example, their focus on Obama as the Muslim outsider, or images of him with a bone through his nose. The conspiracy theories and "fake news" narratives being circulated by the right wing into the mainstream media are especially concerning. I just reread Hitler's "Mein Kampf" and it is eerily similar to what we hear in Trump’s attacks on the free press.

You spent many years studying white supremacist organizations. How are their members radicalized? The mainstream news media loves to talk about the "radicalization" of Muslims, but not much about that same dynamic as it applies to white men.

This happens in at least two ways. The first is, someone who is in need of a way of looking at the world is given a paradigm. For example: "This is how the world works. This is how the world is being taken away from you." Dylann Roof was told that he couldn't get a date because black men were taking away all the white women. The next step is an action plan. It’s one thing to have an analysis. The next is: "What do you do about it, now you know how the world really works?”

For the skinheads that I studied, their action plan was race war: We’re going to take America back. We’re going to intimidate "those people" out of "our" neighborhoods. We’re going to purge the country from the global Jewish conspiracy that’s depriving us of our natural-born power. This logic speaks to a lot of young people, especially young males who have a simplistic way of thinking about the world. It speaks to their simplistic, dichotomous understanding of the world as a zero-sum game: "Somebody is gaining so I must be losing. Here is the action plan." The simple way to do that is through violence.

Where does the racist ideology come in?

It is almost secondary. Racism is a tool. It is not like they join these groups because they’re racist. They join this world and racism becomes a way of empowering themselves. It is primarily about gender, and white males feeling that their world is being taken away from them. The thing about the alt-right is that during the Obama years they existed online. They complained and trolled and promoted rape culture. But what they did was not effective in the outside world. Sitting at their computers, they could create this alternative universe where they felt empowered. Then Trump comes along and opens the metaphorical door, and they spill out into the streets.

Do you think Donald Trump is a white supremacist?

It is easy to talk about Nazis and KKK members and not look at how white supremacy is one of the primary ways through which American society is organized.

How does the right-wing obsession with the nonexistent "War on Christmas" relate to white supremacy?

With Trump there is a normalization of white supremacist rhetoric. "Merry Christmas," in the right-wing context of the supposed War on Christmas, is a push-back against multiculturalism. Trump voters and other conservatives who respond to that language believe it is a political statement to say "Merry Christmas" because they feel their country, and everything sacred about it, is being taken away. The people who cling to the War on Christmas talking point do not have the skills to manage social change in a way that would actually make their lives better.

How do you communicate with people who are so drunk on white identity politics and the psychological wages of whiteness? Is it possible to get them to divest from whiteness and invest in a sense of shared humanity with others?

There are those people who are stuck in the extreme. But if you think of it as a continuum, there are a lot of people between us and them who can be won over. That even applies to neo-Nazis I have met, who are now on the other side. There are ways of breaking through. Part of breaking through is asking where the vision of the world embraced by a neo-Nazi radical, or even the people who want to "Make America Great Again," really go? What does it mean in practice?  If you can have that conversation, all of a sudden their worldview starts to crack a little bit.

The next piece of the puzzle is that we need to get white people who are showing up for anti-racism activities, for example, to look in the mirror and ask, “Why am I doing this? Do I really want to upset the apple cart of white privilege and white supremacy? Or do I want a pat on the back for being down and showing up at the Black Lives Matter rally?”