After Steve Bannon's fall, what becomes of "Trumpism"?

Trump has dumped the intellectual architect of his movement. But Steve Bannon left his (awful) mark on history 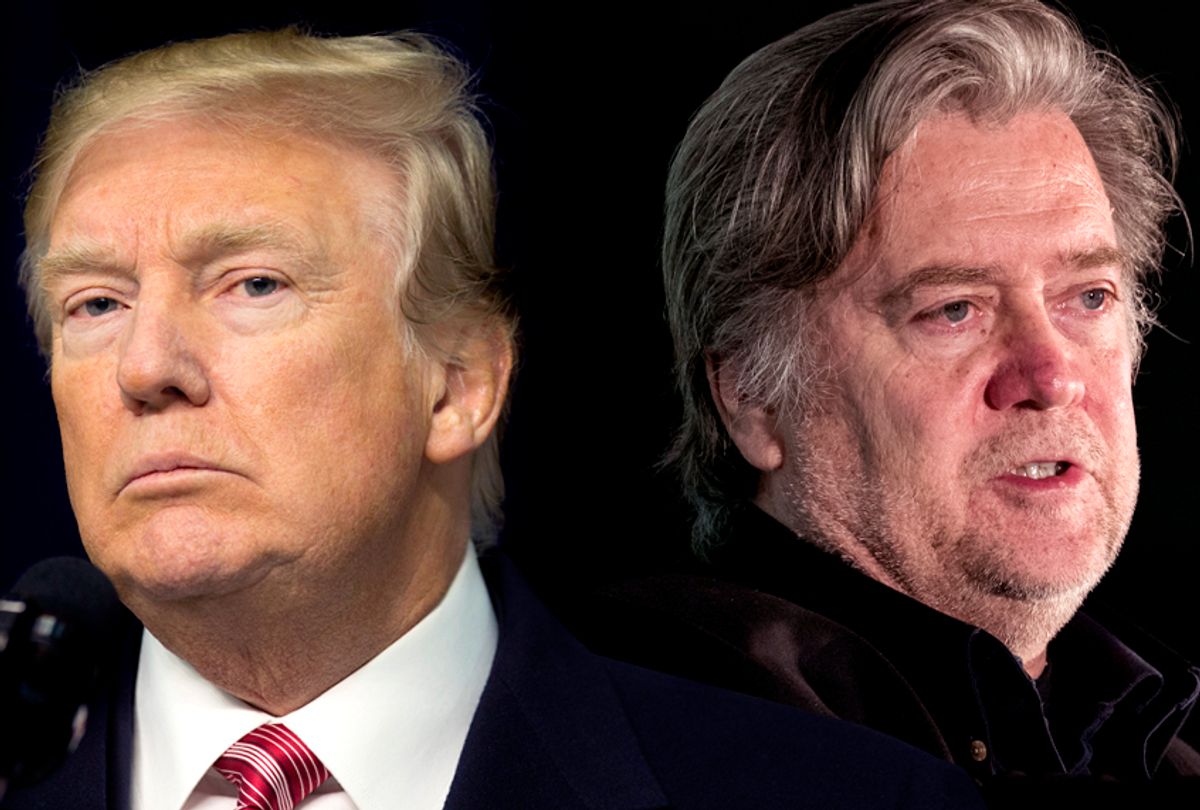 The fall of Steve Bannon, who was regarded as President Trump’s chief ideologue not long ago, was as swift as it was satisfying. After last week’s publication of Michael Wolff’s tell-all book about the chaotic first year of the Trump administration, “Fire and Fury: Inside the Trump White House,” which included scathing quotes from Bannon about the president and his eldest son, the former White House chief strategist and executive chairman of Breitbart News was quickly abandoned by his biggest (read: wealthiest) political allies. He now faces political irrelevance after being forced to step down from Breitbart on Tuesday.

Bannon’s rapid fall from grace proved to be even more dramatic than his meteoric rise last year, when he went from being a fringe documentary producer and far-right propagandist to being one of the highest-ranking advisers to the president of the United States. Of course, not long after Bannon’s comments were first reported last week, President Trump attempted to paint his former chief strategist as a minor player in his White House, declaring in a statement that the Breitbart executive had “nothing to do with me or my Presidency,” and that when Bannon was fired, “he not only lost his job, he lost his mind.” (In fairness, it appears that many of Bannon’s comments to Wolff came before he left the White House.)

“Steve had very little to do with our historic victory, which was delivered by the forgotten men and women of this country,” Trump continued in his statement, concluding that his former adviser and campaign CEO was “simply seeking to burn it all down.”

That last point seems to be a reference to a 2016 Daily Beast article by Ronald Radosh, in which the longtime conservative writer recalled an earlier conversation with Bannon, who had apparently referred to himself as a “Leninist.” Vladimir Lenin, Bannon reportedly told Radosh, “wanted to destroy the state, and that’s my goal too. I want to bring everything crashing down, and destroy all of today’s establishment.”

By alluding to this, Trump seemed to be acknowledging Bannon’s extreme and nihilistic worldview, while also suggesting that it never had any real influence on him or his administration. That is difficult to square with everything we know about Bannon’s time in the White House and his relationship with the president. Contrary to what Trump now claims, his former chief strategist had enormous influence within his administration, and around this time last year Bannon was widely considered to be the intellectual voice of “Trumpism.”

Indeed, Bannon was the man who translated Trump’s incoherent rants and xenophobic outbursts into a semi-coherent ideology. The liberal critic Lionel Trilling famously said that conservatives and reactionaries do not express themselves in ideas, “but in action or in irritable mental gestures which seek to resemble ideas,” and in Trump’s case this is certainly a fitting description. Bannon's task was to try to turn Trump’s irritable mental gestures into real — albeit terrible — ideas.

While the president has never had a real ideology of his own, other than an unwavering belief in himself, Bannon is a committed ideologue who saw Trump as a vehicle for his own political aspirations. Looking back now, the former chief strategist’s greatest flaw in Trumpland was his unwillingness to compromise on those aspirations. Bannon was not an obsequious yes-man to the president, like other staffers in Trump’s inner circle, and was unafraid to speak his mind (as his comments to Wolff show). For Trump, however, “making America great again” was never an ideological project. His campaign was about him, not some higher political cause, and Bannon and other right-wingers jumped on the Trump train because they saw an opportunity to influence the candidate. Although Trump had no coherent political philosophy, he had personal prejudices that appealed to far-right zealots, whether they were white supremacists, white nationalists or “libertarian fascists.”

For Bannon, “making America great again” was always about pushing his far-right agenda and “destroying the state.” When he latched on to the Trump campaign, he appeared to have a golden opportunity to do just that. Bannon was and still is a fringe figure, and would have remained that way had it not been for Trump, who elevated him and gave him real power in the first place. Trump did so because he sympathized with Bannon’s racist and reactionary worldview on a visceral level, even if he did not grasp the reasoning behind it or the supposed complexities of his adviser’s thinking.

Bannon’s brief period near the pinnacle of power may be over, but he has left his mark on American politics. If “Trumpism” can be called an ideology (which is debatable), Steve Bannon is its true architect. Not surprisingly, then, the Trump administration has largely abandoned the tenets of Trumpism since Bannon left the White House last summer, adopting a more straightforward Republican agenda that favors big corporations and the wealthiest Americans (see the GOP tax bill). Trump is now surrounded overwhelmingly by establishment types, and thus his administration has become a fairly standard Republican operation, at least in terms of policy.

The one major difference, of course, is the president himself. Trump is still Trump — a pompous, primitive and bigoted blowhard with the temperament of a pubescent boy and the intellectual capacity of an illiterate caveman. For many MAGA supporters who have come to worship the president as much as he worships himself, that’s all that matters.