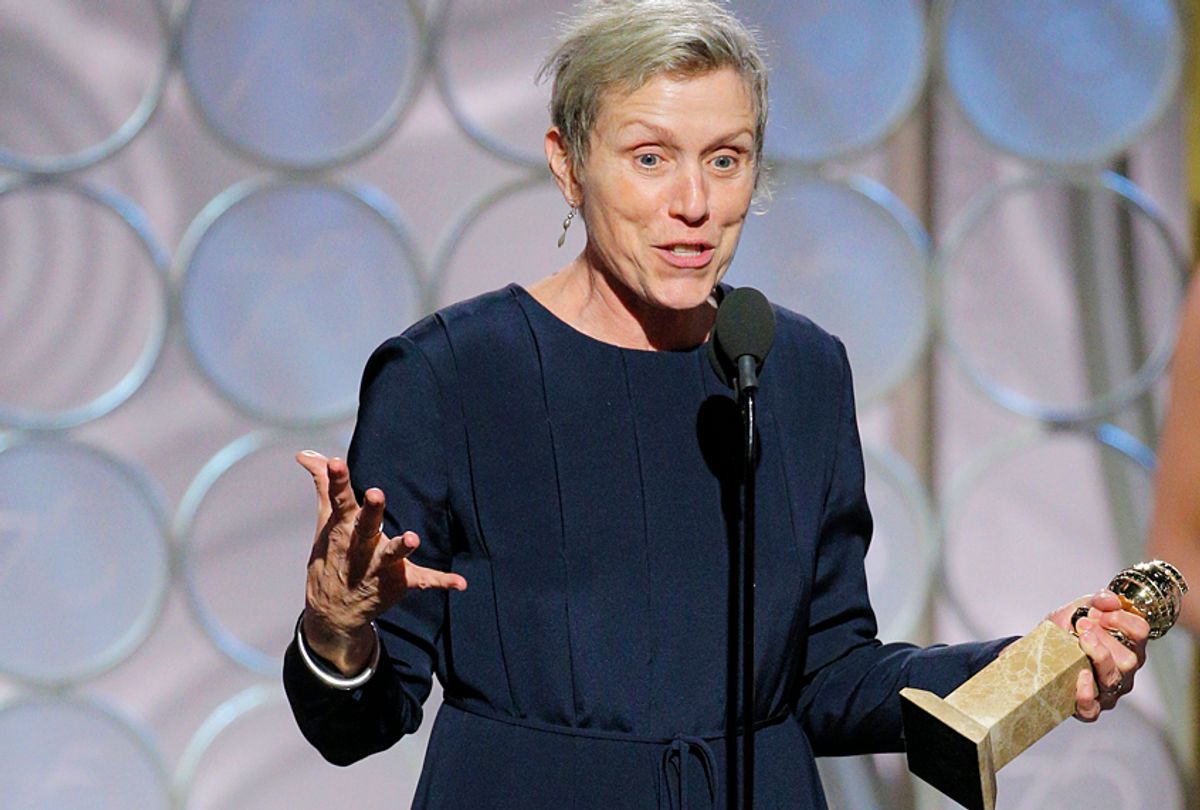 Frances McDormand accepts the award for Best Performance by an Actress in a Motion Picture – Drama for “Three Billboards Outside Ebbing, Missouri” during the 75th Annual Golden Globe Awards (Getty/Paul Drinkwater)
--

It was easy to overlook the significance of the actual awards at last Sunday’s Golden Globes. Despite a male Master of Ceremonies, it was a night about women. The solidarity and fortitude expressed through the attire, the activist guests and the heartfelt, occasionally irreverent, speeches, was the show — and it all made for a good one at that. The awards, chosen by the notoriously dubious Hollywood Foreign Press Association, fell into the background.

But as the week went on, the stakes of the big awards handed out at the Globes came into focus. Especially the one for best drama. The most polarizing film nominated for that award — Martin McDonagh’s fiery, racially problematic tale of female rage, “Three Billboards Outside Ebbing, Missouri” — took the prize. And in so doing, a bull’s eye materialized. As Vulture’s Nate Jones wrote on Wednesday, “With its four wins Sunday night, Martin McDonagh’s 'Three Billboards Outside Ebbing, Missouri' not only became the Oscar front-runner, it was also officially inaugurated as this year’s 'La La Land,' the movie whose awards success is seen as emblematic of America’s various ills.”

The issue that many critics have raised with “Three Billboards” is that the film gives Sam Rockwell’s Dixon, a racist half-wit cop notorious for violence against black people, a redemption arc that airbrushes over Dixon’s racist crimes: McDonagh never shows Dixon’s black victim, and that crime takes a backseat to the crime committed against the protagonist’s daughter, a white woman.

Granted, backlash to the Oscar favorite is a time-honored tradition. Convention is meant to be challenged. As is the Academy’s traditionalist taste. Most years, the leading dog has happened to sport a glaring flaw. And in this age of hot takes and abundant social and political consciousness, the tendency to pick apart anything that is either politically incorrect or insensitive is heightened — and often, justifiably so.

While the debate over marquee awards has always been political, in the Trump era, major awards, like the Oscar for best picture or the Grammy for best album, have been elevated to definitive referendums on American cultural values. If Adele’s “25” beats Beyoncé’s “Lemonade,” it’s as if American racism is pulsating. If “Moonlight” beats “La La Land,” there might be hope for us after all.

There are, of course, other factors beyond message at play, though, in what makes a piece of art the best — style, craft, performance, originality, the intangible feelings that a work produces, to name a few. (And as a side note, it bears saying that the very notion of pitting pieces of art against each other is more than a little bit ridiculous.) But when a “La La Land” or a “Three Billboards” is the Oscar favorite, we tend not to talk about those things. Which is a shame. As important as it is to call out and reject pieces of art that do a disservice to a marginalized group, the debate over Best Picture should not be reduced to one over what film is wokest.

This year that is especially true. 2017 was an extraordinarily rich year for cinema. As opposed to last year, which felt like a two-film race between “La La Land” (which had won best musical or comedy at the Globes) and “Moonlight” (which had won best drama at the Globes), this year’s pool of contenders appears vaster; there’s not one hero film to “Three Billboards”’ villain, there are many.

And as such, much more interesting than picking apart “Three Billboards” would be pitting two socially relevant, nearly universally beloved contenders, like “Get Out” and “Lady Bird,” against each other; or two masterpieces from established auteurs, like Christopher Nolan’s “Dunkirk” and Paul Thomas Anderson’s “Phantom Thread”; or two mainstream breakouts from underrated vets, like Sean Baker’s “The Florida Project” and Luca Guadagnino’s “Call Me by Your Name.”

All of the aforementioned films managed to be moving, resonant and without questionable politics. Really, each was in an altogether separate league than “Three Billboards” even before the film’s representational flaws come into the discussion. Had the Hollywood Foreign Press not elevated “Three Billboards” to the status of favorite, takedowns of the film would feel like going after a straw man.

So, can’t we pretend that they didn’t? Can’t we just act as though the field won and proceed to have the more difficult arguments? After all, the Golden Globes aren’t even particularly predictive when it comes to the Academy Award race for best picture. (The upcoming DGA Awards, on the other hand, are much more closely correlated with Oscar success.) Sunday’s show was inspiring and uplifting; the night advanced the conversation around sexual misconduct and imbalanced gendered power dynamics in Hollywood. That can be enough; we don’t have to allow the show’s final moment to derail the next two months’ awards discussion.