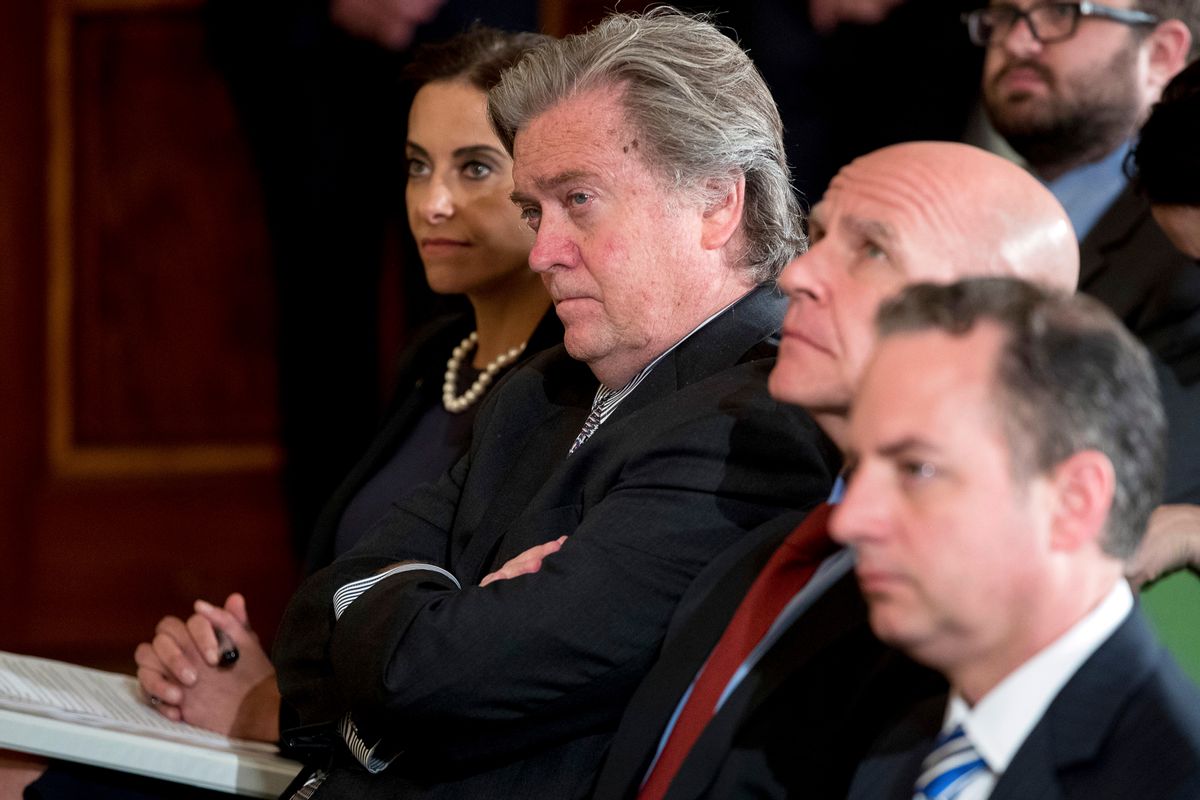 President Donald Trump's former chief strategist Steve Bannon is under fire after he refused to answer a number of questions from congressional investigators at the instruction of the White House.

Bannon refused to answer questions posed by the House Intelligence Committee about his work during the Trump presidential transition or as an adviser to Trump during his actual presidency, according to CNN. Rep. Adam Schiff, D-Calif., said that Bannon was operating under what effectively amounted to a "gag order" issued from the White House itself, which was arguing that it may need to invoke executive privilege around the content of some of Bannon's answers in the future.

Members of both parties reacted with anger to Bannon's actions. The congressman in charge of the investigation in that committee, Rep. Mike Conaway, R-Texas, issued a subpoena against Bannon, one that was signed then and there by committee chairman Rep. Devin Nunes, R-Calif. Conaway had decided that the White House's "expansive claim of executive privilege doesn't apply," Rep. Jim Himes, D-Conn., told CNN's Anderson Cooper — and the former chief strategist risked placing himself in contempt of Congress through his stonewalling.

"There was a great deal of consternation on both sides of the aisle," Himes told Cooper. "I am glad to say that members of both parties really pushed back hard against this unprecedented claim."

Bannon's decision to avoid answering questions on the grounds of potentially infringing on executive privilege evoked memories of Attorney General Jeff Sessions' response to congressional questions last year. Sessions had also refused to answer certain questions related to the Trump-Russia investigation by citing possible executive privilege, according to Politico. In Bannon's case, however, the stonewalling was even more striking because he cited it with regard to conversations that had occurred either during the transition period or after Bannon had left the White House, both of which would not normally be covered by executive privilege.

The outrage at Bannon's refusal to assist the investigation even drew the ire of Rep. Devin Nunes, R-Calif., who was compelled to step down as the leader of the investigation despite chairing the House Intelligence Committee, after he was seen helping the White House concoct a cover story for Trump's false claim of having been wiretapped by President Barack Obama. Even though Nunes has continued to try to help Trump since that time, he told reporters that he authorized the subpoena on Bannon because "that’s how the rules work."

Bannon was also subpoenaed by special counsel Robert Mueller last week, according to NBC News. FBI agents appeared at his home in order to serve him the subpoena, although they were redirected to Bannon's lawyer William Burck. Bannon's subpoena from the special counsel would require him to appear before a grand jury, although he may be able to agree to a deal in which he appears before Mueller's investigators instead.

Prior to leaving the Trump White House, Bannon had been considered one of the most influential ideologues within Trump's presidency. His economic populism had helped define Trump's message during the 2016 campaign and shaped both the rhetoric and policies of his early months as president.

"He believes that the U.S. middle class has withered over the last forty years and has been victimized by this financial, commercial and political elite that makes things cushy for the elite," Quartz writer Gwynn Guilford explained to Salon in November 2016.