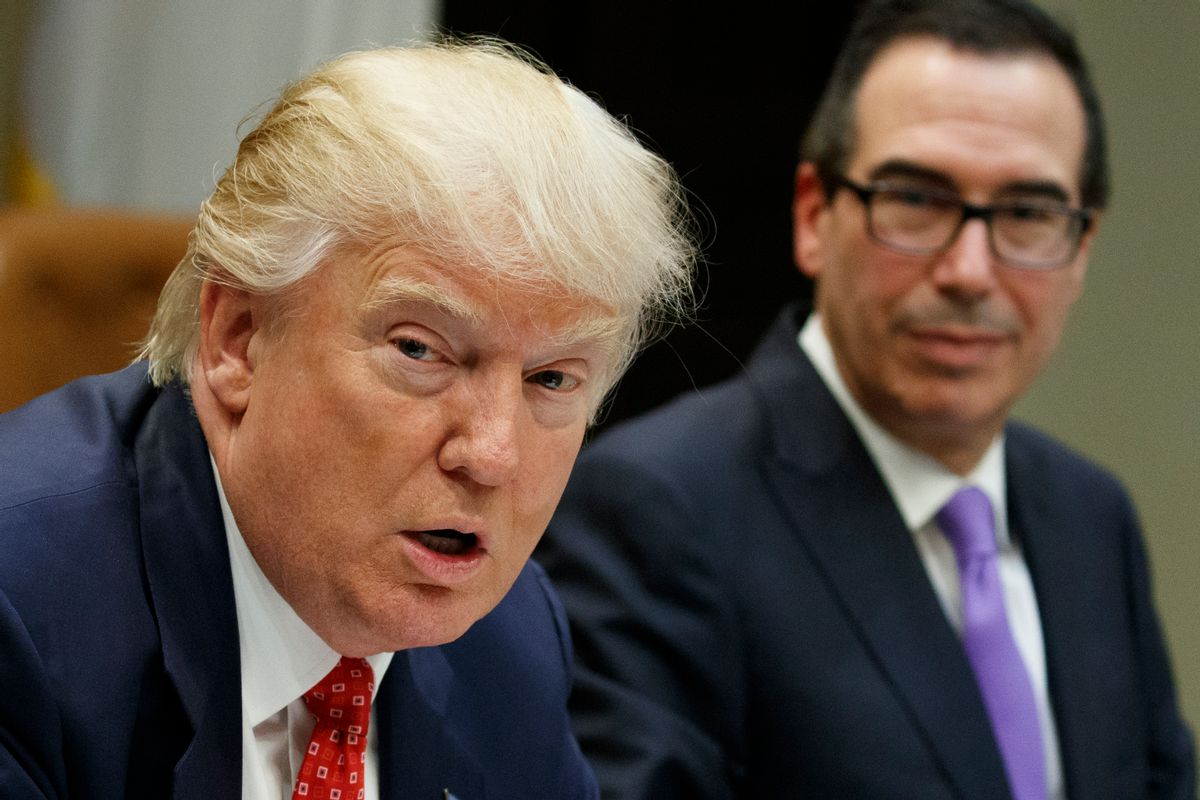 President Donald Trump's simultaneous support for more restrictive trade policies and a weaker dollar has some concerned that America could spark an international trade war.

While speaking with reporters at the World Economic Forum in Davos, Treasury Secretary Steven Mnuchin seemed to reverse a quarter century of American economic policy that touted the importance and strength of the American dollar.

"Obviously, a weaker dollar is good for us as it relates to trade and opportunities," Mnuchin told reporters, according to Politico. The Treasury Secretary made it clear that the dollar's decline by roughly 10 percent since last year when compared to several other currencies was "not a concern of ours at all."

Trump has also spent his presidency bucking decades of free trade policy, which has been supported by every president since the last outright protectionist, Herbert Hoover. Early in his presidency, Trump withdrew the United States from the Trans-Pacific Partnership, a trade deal involving 11 countries, and has employed rhetorical broadsides against conventional trade policy as far back as his 2016 presidential campaign. Trump furthered his anti-free trade philosophy by supporting tariff increases on imported solar-energy components and large washing machines, stoking further concerns that he could provoke a trade war with rival powers.

"There’s always potential for retribution or retaliation and that’s up to the Chinese to decide," Secretary of Commerce Wilbur Ross told reporters at Davos, according to the Associated Press. He added, "Trade wars are fought every single day. Unfortunately, every single day there are various parties trying to violate the rules, and trying to take unfair advantage of things . . . the difference is that U.S. troops are now coming to the ramparts."

There is another danger to Trump's anti-dollar and anti-trade remarks. Although a weaker dollar can help with exports, it would also make foreign goods more expensive for Americans. The same is true with protectionist trade policies, which in addition to imposing higher tariffs on those goods could also hurt American industries that are more reliant on foreign consumers.

Trump has also placed a tremendous emphasis on the success of the stock market since he took office, a fact that he has often mentioned since taking office and which he is expected to reference during his speech at the World Economic Forum on Friday. Yet the stock market's health could very well be negatively impacted by Trump's "America First" economic policies, which is why Trump's Chief Economic Adviser Gary Cohn tried to reassure the Davos attendees.