What if there is no reality — and this is all a bad Netflix series?

"The Matrix" is old news: We're inside a show about a clownish president, a steely prosecutor and a murky scandal 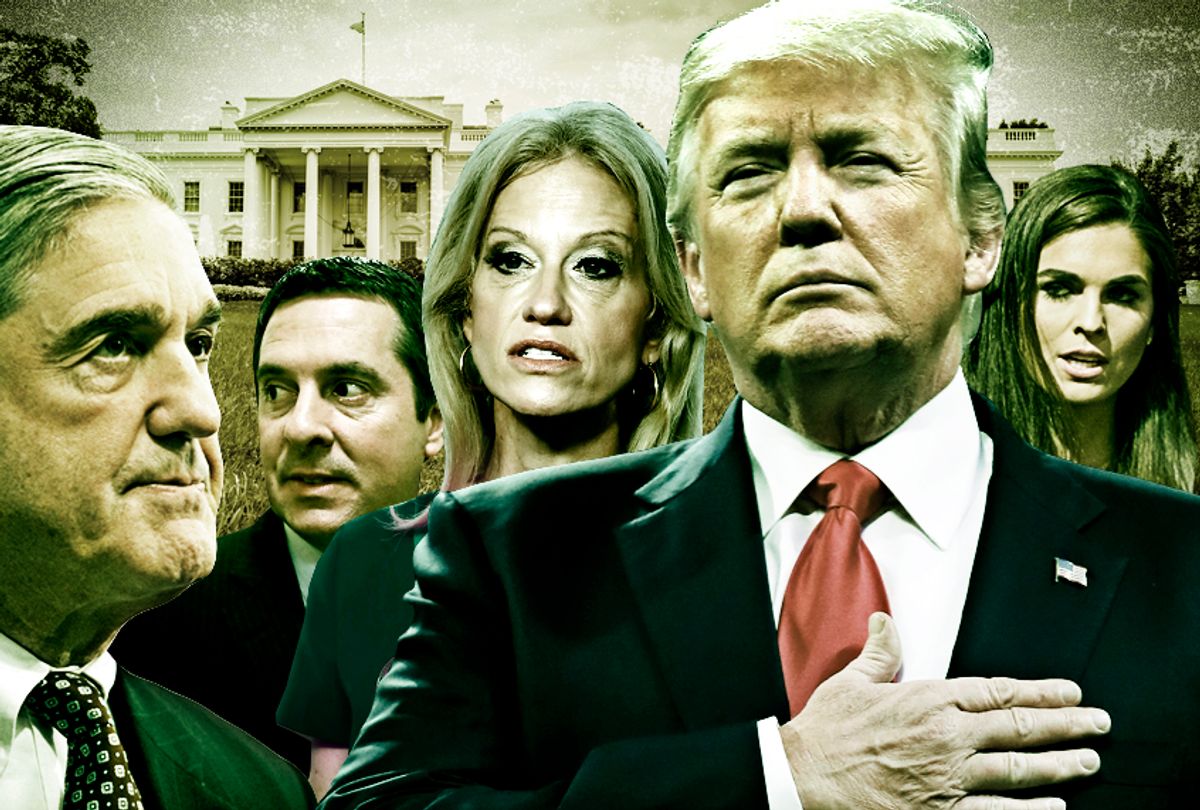 A couple of years ago, Neil deGrasse Tyson hosted a debate at the Hayden Planetarium in New York on the hypothesis that our universe might be a Matrix-like computer simulation designed by a superior civilization. (Conclusion: Unknowable, but not disprovable. Whether our awareness of this possibility was evidence against it — can characters in a video game become self-conscious? — also proved to be a circular conundrum.) The discussion was a lot of fun, although that particular thought experiment has always struck me as a way for physicists and cosmologists and so on to talk about God without invoking religion or getting stuck in questions about “turtles all the way down.”

Most scientists incline toward atheism because they have concluded that a divine creator — or an alien race of higher-order software engineers — is not necessary to understand the physical universe. But isn’t that exaggerated faith in the power of Reason an example of human hubris in its most refined form, one that is contradicted by recent history and lived experience? I am reminded here of Mormon historian Terryl Givens’ ingenious formulation: His church had never claimed that its outlandish theology was plausible, he argued, only that it was true. Which, as we see around us every day in the United States of America under President Donald Trump, is an entirely different matter.

Every weekday morning I get up and make coffee, scan the headlines and read whatever Salon columnist Heather Digby Parton has dropped into my inbox overnight. It all begins in a state of ordinary grogginess that rapidly gives way, with the infusion of caffeine, the early-morning tweets from You Know Who (typically up well before I am) and the nuggets of alarming or hilarious news, to a mounting sense of unreality. At some point during the day, I inevitably see the president on television and suppress the desire to laugh out loud, reminding myself again that he is in fact the president, as ridiculous as that seems, and it’s definitely not a laughing matter. Maybe tonight I will remember to write it on my arm, like the guy in “Memento”: TRUMP/POTUS! NOT JK!

On the other hand, maybe none of this is really happening. Maybe the earnest liberals who kept falling for the “Hamilton elector” fantasy that Trump hadn’t actually won the election, and believed that somehow we could return to an unwarped reality where Hillary Clinton was president and decency was trending upward, were more profoundly correct than any of us could possibly know. It’s certainly the case that nothing about our current situation seems either true or plausible, to borrow Givens’ terms.

So where are we then? This stagnant and unconvincing backwater of pseudo-reality doesn’t feel much like the work of the benevolent but distant God of Judeo-Christian theology; even the mean-spirited desert overlord of the Old Testament was more into frogs and boils and floods and smiting people down in wrath than elaborate hoaxes. If we’re all just terabytes of data criss-crossing inside some galactic computer server, it seems to be running second-rate educational software meant to deliver didactic lessons (over and over again) to emotionally impaired alien children. So I don’t subscribe to either of those beliefs. I just think we’re probably on TV.

I mean: Right? It’s the only explanation that makes sense of all the available evidence. If some New Age theorists have postulated that human consciousness is the “emergent form” at the pinnacle of the universe, I would suggest that it has now been surpassed by television drama. If we’re all characters (or extras) in the second season of a “dark but hilarious” Netflix series about a reality-show tycoon who becomes president — a series that’s really starting to struggle with narrative traction, let’s be honest — a great many things that seem otherwise inexplicable fall into place. The fact that we can all recall a shared version of reality that was less TV-like (or at least we think we can) is not much of a counter-argument.

Characters in “Veep” or “House of Cards” or “Homeland,” after all, know about Julius Caesar and Dickens novels and the civil rights movement, even as they engage with fictional presidents and FBI directors and members of Congress. (I don’t think we’re in an HBO-style fantasy universe, though maybe the undead army and the girl with the dragons will show up in Season 3. I hope so!) We could try to identify the moment when the “real” past ends and our fictional universe begins — certain plot threads, at least, reach back long before that guy came down the escalator at Trump Tower and started talking about rapists — but it’s the nature of our conditional existence that we will never know for sure.

This application of Occam’s razor creates a sensible context for Devin Nunes, to cite one prominent example, who is clearly a minor comic villain borrowed from 18th-century farce. (In those days he’d have been Count Nuno, a devious but inept low-level aristocrat, with one foot always in the chamber pot). Otherwise we’d have to contend with the uncomfortable notion that Nunes is a real person in the same universe and historical time-stream that produced Abraham Lincoln and Martin Luther King Jr. and the Vietnam War. Which is patently ludicrous.

Similarly, Count Nuno’s infamous “memo” (in the Molière original a counterfeit letter from a lady, full of double entendre), instead of being a transparent plot device that had the audience snickering long before it blew up in his face, would have to be considered a desperate gambit obviously cooked up by a toadying congressman in hopes of saving a corrupt president, which everyone dutifully spent several days pretending was significant and surprising. That would be a humiliating reality to live in, wouldn't it?

We might be forced to conclude that the Trump White House was inadvertently acting out a rerun of the Watergate scandal — at one-quarter speed, and vastly lower wattage — because its staff were imprisoned by the stupidest possible iteration of Karl Marx’s maxim about history repeating itself. Rather than, say, that some ambitious team of writers had crafted an arch, knowing satire full of overwrought stereotypes and obvious nods at history.

I’m not claiming the TV show we’re in is all that great, which is a little disappointing. But if somebody else wrote it, at least we can’t be held responsible. It certainly has its strengths, especially in Season 1, which had street fights, dramatic courtroom showdowns and slapstick supporting characters. The main guy, yelling at everybody like Mussolini and tweeting from his gold-plated toilet? (Fine, they didn’t come up with that detail till later.) What an amazing antihero! Totally compelling and horrible. I’m pretty much OK with the fact that Bob, the lantern-jawed prosecutor, never says anything. It’s very “Twin Peaks”! I worry, though, that when they finally let him talk it’ll be a total anticlimax and everyone will be super sad.

They wrote Sean off the show, and he was pretty played out, though a lot of people think his replacement, Sarah the Christian mom, is way too broad and kind of sexist. (I don’t think real Christian moms from Arkansas really sound like that.) Kellyanne got shoved into the background because she was super-hated for being blonde and thin and lying all the time. But Hope, who seems smarter and lies just as much, was promoted to a major role, and has seriously divided the fan base. Steve, the self-appointed barfly genius everybody loved to hate, got suddenly chucked out right at the beginning of Season 2. What a twist! Will he be back next season, if there is one? There’s a lot of debate about that.

You have to wonder whether other people, somewhere, are in the Javanka spinoff series, because for a while it seemed like this was secretly their show but they hardly ever show up anymore. Pretty much everyone misses the irrepressible Scaramucci; yeah, his name was way too on-the-nose, but he was simply too entertaining to get written out so fast. (I guess Johnny Depp wasn’t willing to do a Netflix show for more than two episodes.)

As for the whole Russia plotline, which may or may not be the central theme (it’s hard to say from here) — can we agree that it’s ingeniously crafted? It has some of the funniest characters: Don Jr., Manafort, Mike Flynn, that guy Rob Goldstone with the funny hats, who completely stole that one episode! To some of us it looks like a dastardly “Manchurian Candidate” scheme that explains the entire fictional universe; to others, it’s a bloated chimera that distracts us from what’s really important. I’m beginning to suspect that it’s one of those tangled “Big Sleep”/“Chinatown” things that will never get resolved, so fans can argue about it forever. Which is a little bit too bad. Bob Mueller is Keyser Söze! LOL.

Bringing back Nunes, after his dopey “midnight run” episode in Season 1, is a weird choice. It feels like the show’s universe is contracting and the writers are just recycling ideas. The central character hasn’t evolved at all — he just watches those made-up TV shows that no actual person could stand for five minutes, and then rages about stuff that isn’t real. And how did you feel about that writer guy, Michael? Why did they have to make him so repulsive? He basically told us a bunch of stuff we already knew about how Donald is evil and dumb and everybody hates him. Honestly, it was depressing. What was the point?

Speaking of that, we could also pursue the far less believable hypothesis that these are real people who wound up running the United States in the 21st century — or the established fact that we cannot reliably tell the difference between fantasy and reality. That would bring us face to face with the uncomfortable possibility that we are all a pack of trolls, that our whining about democracy is nothing more than tribal bickering and that our national discourse has become irredeemably debased. We are the writers of this show, in other words. There is no one else to blame. We must take responsibility for how it started, and how it will end.