Taking a knee at the Super Bowl: Will it matter?

All eyes will be on the Patriots and Eagles today during the performance of the national anthem. Then what? 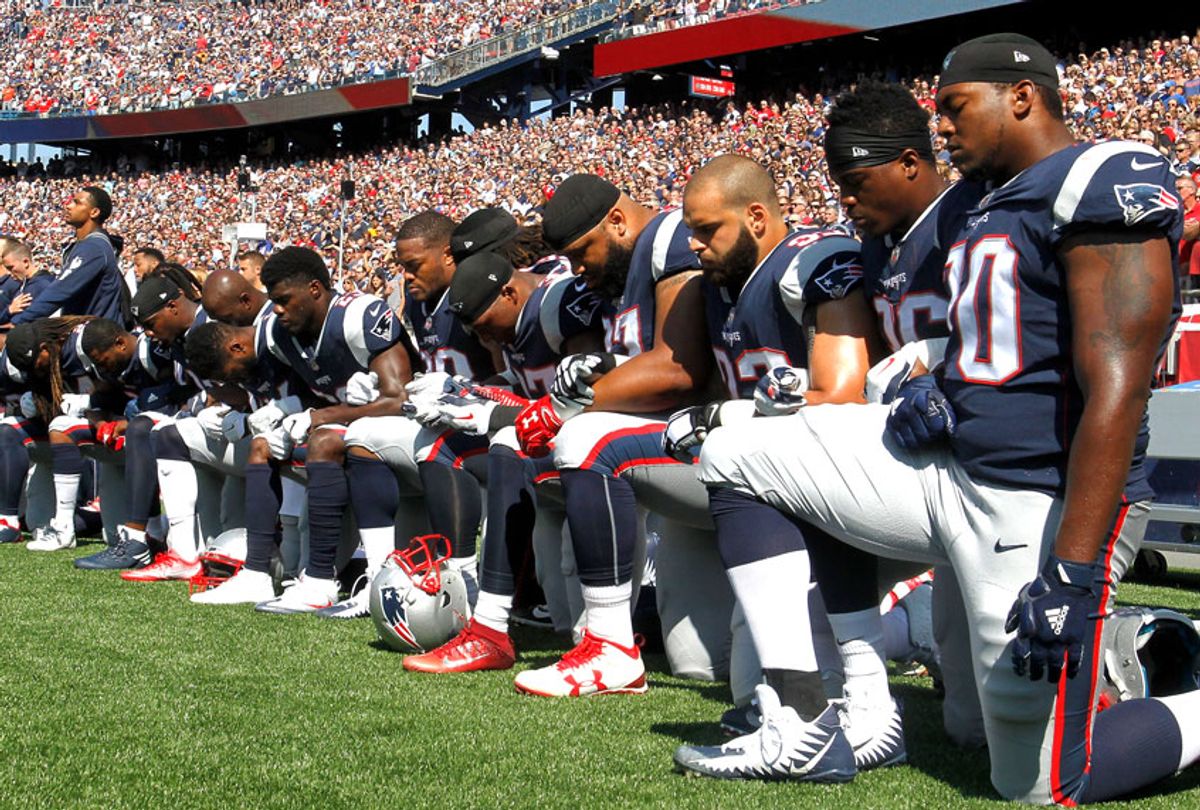 The blackballing of Colin Kaepernick for his peaceful protest during the national anthem in the 2016-2017 NFL season has continued to be one of the biggest stories this year, mainly because other coaches and players followed suit, sparking a movement that split the country and made it all the way up to the White House. As we approach Super Bowl LII, a face-off between the Philadelphia Eagles and the New England Patriots, in this obviously divided America, everybody wants to know what the black guys are going to do.

Will they take a knee? Will they sing the anthem? Will they lock arms or kneel in prayer? Who knows?

Before we get into that, here's what you need to know about the history of the national anthem.

Francis Scott Key — lawyer, amateur poet and slave owner — wrote a poem, "Defence of Fort M'Henry," after seeing the American flag proudly flying during a failed British attack on the Baltimore Harbor during the Battle of Baltimore in the War of 1812. That poem became the lyrics to "The Star-Spangled Banner," which was designated our national anthem by Congress in 1931.

Key wrote the poem while he was a slave owner. He sang for freedom while literally enslaving black people.

Most are familiar with the first stanza of his poem, as that’s the version you hear at sporting events; however, the full version has three more and includes the line, “No refuge could save the hireling and slave / From the terror of flight, or the gloom of the grave.”

That line was a shot at the slaves who agreed to fight with the British in exchange for their freedom from American bondage. Who wouldn’t want freedom, and how could he not understand them opting out for a better life? Andrew Jackson caught wind of slaves agreeing to fight with the British in exchange for freedom and made a similar promise to thousands of slaves in Louisiana. He told them if they protected Louisiana, they could be free after the war. Well, we won the war, and then Jackson reneged on the deal. He went on to be president while the brave Africans who fought with honor went back into servitude.

Kaepernick never mentioned the racist history of the song when he started sitting it out. His reasons were tied to the string of killings of unarmed African-Americans by police officers and the way in which the system fails to deliver justice in these cases, over and over again. Critics of Kap, the movement and other players who took a knee — like President Donald Trump, who called any NFL-employed peaceful protester a “son of a bitch,” and Mile Pence, who walked out of a game in which players kneeled — don’t know, understand or care about the history of the song or why the players are kneeling while it's played. Disrespecting the flag, troops and law enforcement are the only recycled bad ideas that they are able to comprehend. Those same critics never acknowledge that many American troops kneeled with Kap, as they agree that our country has serious problems that need to be addressed. It’s also important to mention that a U.S. Army veteran, Nate Boyer, influenced Kaepernick to kneel rather than sit. Again, active solders get it. Pence, who never served in the military, and draft-dodging-Donald, don’t.

This Sunday, millions will tune in to see the biggest sporting event of the year. This is the ultimate chance for NFL players to send a message to the world­ that America constantly falls short of its own ideals: equality doesn’t exist, and our government practices racist polices in a racist system while being ran by a racist president. This message constantly needs to be sent, but at times I wonder if anyone cares.

All of the white people I know are aware of how racist America is­­. Some stand for the anthem and some don’t, but collectively they all have told me that standing is just something to do at sporting events. Don’t believe me? Ask a white person. They don’t salute the flag in the morning, or before dinner, while they are in nightclubs or after sex. It’s not likely on Sean Hannity’s or Tucker Carlson’s playlists. Even Tomi Lahren was caught bumping 21 Savage, not the anthem. And the same goes for African-Americans; some stand and some don’t. Most thinking people get it, and the non-thinkers are great at pretending to be offended by all of the controversy surrounding a song they rarely notice otherwise.

Recently, I watched a friend judge a high school public speaking contest at Baltimore's War Memorial. The room was full of vets, and of course the ceremony started with a flag tribute. When they asked us to stand, she looked at me and smirked­. But I was already on my feet, laughing to myself. After the event, she said, “Thank you for standing. I thought you were going to take a knee.” We both laughed; she because of my rebellious nature and me because my knees are too old and beat up to be kneeling on.

I've never stood for the flag on a consistent basis. I don’t ever remember standing for it at sporting events. But I’m not a pro, so nobody cares if I stand or not. One side of me would love to unite with the players, using my platform to fight these issues. The other side of me has really low expectations for America when it comes to dealing with race. I mean­­, look at who is in the White House now. Isn’t the lack of concern over racism grossly obvious?

What many don’t understand is that kneeling during the national anthem is not the most important part of Kap’s protest. We focus on people taking a knee, but the real win lies in the million-plus dollars he donated to organizations that are making positive changes in oppressed communities. Kneeling has stopped him from getting NFL checks, and those checks could’ve turned that $1 million donation to $3 or 4 million easily. I’m not saying that his actions aren't good enough. They are amazing, and he will forever be honored for sticking to his convictions. But racism is still winning in the end.

Like everyone else, I’m wondering what the players are going to do today, though I don't think fighting racism is in their job description. Racist fans love black athletes when they're dunking or scoring touchdowns but hate them when when they speak out about our country's problems. I just want to see those guys get paid and hopefully use their resources for good, so they aren't just kneeling like Kap but making a real difference like Kap. But I’ll have to find out by word of mouth, because I won’t be watching Super Bowl LII. I boycotted the NFL this year.