Why I'm feeling patriotic in the age of Trump

It's hard times for black people like me, but Colin Kaepernick, Meek Mill and more, offer reasons to love America 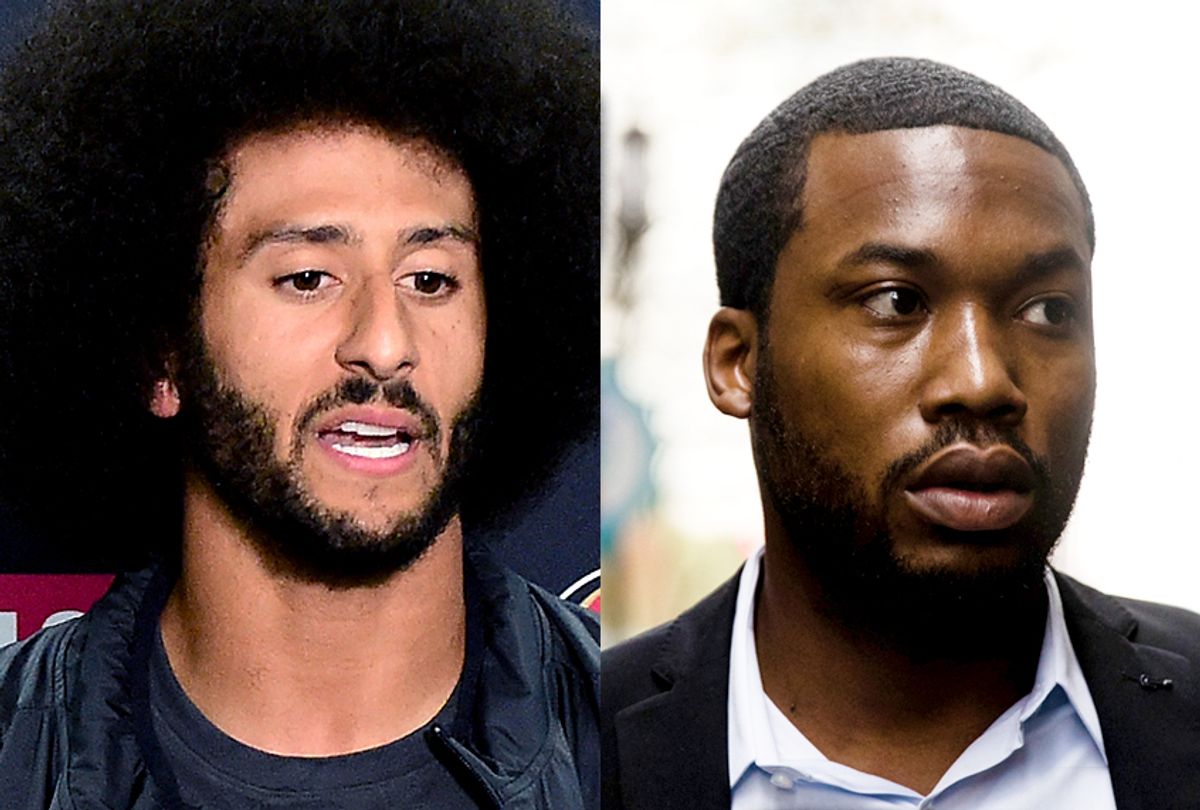 Something special is happening in America, and I can honestly say I've never felt more patriotic.

That probably sounds crazy coming from a black person in America in the age of President Donald Trump. I'm living in a country that elected a president who wouldn’t denounce known Klan leader David Duke, called the members of a racist rally in Charlottesville "very fine people" and referred to countries populated primarily with people the same color as me as "s**tholes," after all.

Watching this nonsense and hearing about his childish rants every day on TV should put me in line for rejecting America as a whole. Yet, the philanthropy of Colin Kaepernick redefines what being an American means to me.

Kaepernick started taking a knee in 2016 as a silent protest against various forms of American injustice (specifically, the killing of unarmed black people by police and the racial inequities black people face in the criminal-justice system). By all appearances, his actions cost him his job and set him up for negative backlash from every racist in America, including the president of the United States, who called him and anyone else participating in the protest "sons of bitches."

Kaepernick, the bigger person, ignored Trump and decided to give 1 million dollars to a collection of organizations dedicated to making our country a better place. Here, he's bypassing the back-and-forth over our obvious problems and creating real solutions that will have positive impacts. It's an act of showing love for the sake of showing love that's becoming contagious, as other celebrities begin to follow in his footsteps.

Kaepernick listed the places he donated to on his website, including the many people who benefited from the first $900,000 that he gave to over 30 organizations. Currently, he's publicizing his dispersal of the last $100,000 in his #10for10 social campaign, highlighting the 10 organizations getting $10,000 a piece.

The only difference with this new pivot is that celebrities have been chipping in and matching Kap’s donations, helping these change agents receive double the money. So far, he's received contributions from stars like Jhene Aiko, Stephen Curry, Kevin Durant, Serena Williams and Snoop Dogg. Perhaps most notably, yesterday, Meek Mill, who is currently incarcerated in a case of what many consider to be cruel and unusual punishment, matched Kaepernick’s $10,000 donation to Philadelphia's Youth Service Inc.

"Despite my brother’s current circumstances, he continues to stay involved and connected in the community of his hometown of Philly," Kaepernick said, according to TMZ Sports. "I’ve spoken to Meek several times since his incarceration and during one of these calls, is when he pledged . . . we’re both donating $10,000 each for a combined $20,000 to Philadelphia’s Youth Service Inc."

The fact that Kaepernick can help so many others while being blackballed from the game he loves, and that Meek Mill can find it in his heart to do the same from inside a cell, should challenge us all to do better. It’s up to us to create the America that we would like to see. If we spent more time working on building that place and less time focusing on the hate that bubbles up every time Trump tweets, we’d be closer to that goal.

I’m not allowing Trump, Jeff Sessions or any of those goofballs make me bitter anymore­­. I have too much love in me, and there are too many people that deserve to benefit from it. Check out some of the places that benefited from Kaepernick's #10for 10. And visit his website if you want to help.