The Arizona senate race may be the year's wildest

There's a slew of candidates, and it's anybody's guess who will win 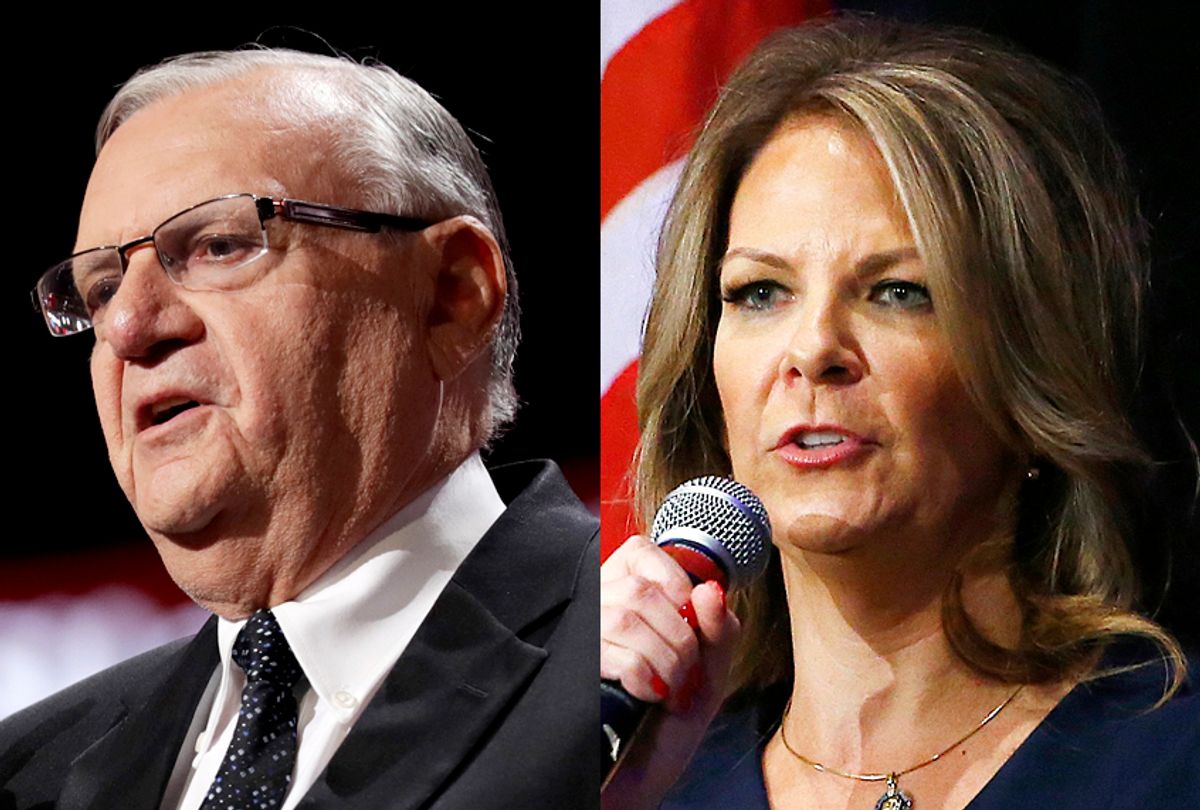 Not even six months ago, Kelli Ward looked poised to take on Jeff Flake in the 2018 election for his senate seat. Flake, by this point a well-known critic of President Donald Trump, would have had a tough battle ahead of him. He was losing favor with the White House, while Ward seemed to making an impression not only on the president but on Arizona voters, who only two years ago overwhelmingly voted for John McCain over Ward by an 11-point margin.

Ward was one of several senate hopefuls who were endorsed by the former White House chief strategist Steve Bannon and were part of the nationwide Make America Great Again efforts across the country, which included other fringe Republicans like Roy Moore and Michael Grimm. Despite having Bannon’s endorsement, Trump had yet to give her an official endorsement, offering only a tweet in support of Ward last fall.

But then Flake suddenly announced he would retire after his current term, citing, among other reasons, that he didn’t think he could win a re-election given the trajectory the GOP was taking after Trump’s election. Flake’s resignation paved the way for Ward to be the Republican front-runner to take over his seat, but it also opened the door for plenty of other would-be Senate hopefuls to join the race.

Shortly thereafter, Alabama senate hopeful Moore was accused of sexual assault against several teenage girls while he was in his thirties in the 1970s and 1980s. He would end up becoming the first Alabama Republican to lose to a Democrat since 1997 after Doug Jones defeated him in the December special election. The loss was a defeat not only for Republicans, but it was another big blow for Bannon and Ward.

Now, Ward is likewise trying to distance herself from Bannon. While at first noncommittal about the former White House official, Ward has since taken a harder stance in order to disassociate herself from him.

Her press secretary, Zachery Henry, tweeted out a statement in early January after the fallout, saying, "The most important endorsements in this race will come from the voters of Arizona. Steve Bannon is only one of many high-profile endorsements Dr. Ward has received. Her focus remains on winning this race, which she is in a great position to do, and then helping President Trump advance an America First agenda. The daily parlor intrigue in Washington, D.C. does nothing to improve the lives of the hard-working men and women of this country."

She continued, “He was never part of my campaign. He was never an adviser. I mean, he's not somebody that I reach out and talk to in any way, shape or form. It's funny that you, and especially the establishment, would love to tie me to Steve Bannon."

Another complication to Ward’s senate hopes is the emergence of former Maricopa County sheriff Joe Arpaio and Arizona representative Martha McSally. Arpaio, just months removed from being convicted for criminal contempt and then subsequently pardoned by the president, announced his candidacy in early January.

Ward’s chances against Flake seemed promising. Without Flake, she had little to worry about in the Republican primary, having only to deal with Democrat Krysten Sinema in the general election, in a state that hasn’t had a Democratic senator in over 30 years. But now it’s uncertain whether she will even make it out of the primary. McSally has long been a favorite among the Arizona GOP establishment, and Arpaio is an old pal of Trump’s who, despite losing to a Democrat in the heavily Republican Maricopa County in 2016 in a re-election bid, could still take enough votes away from Ward to threaten her chances of winning.

Should she make it out of the primary, she faces tough competition against Sinema, who many presume will win the Democratic primary. Sinema is known as a prolific campaigner, and she has a penchant for voting in favor of Republican measures, voting with Trump’s agenda more than any other Arizona Democrat.

Ward is a former physician who used to serve as a senator in the Arizona legislature. She had previously run for the U.S. Senate in 2016, where she lost to McCain by a sizeable margin.

For the time being, Ward will have to fight with McSally and Arpaio for the endorsement of Trump, who only beat Hillary Clinton by a 3.5 percent margin in the 2016 election. Any Trump endorsement could complicate a race that has become more intriguing, not to mention complicated, many times over already.

Even without Trump’s golden seal of approval, Ward has received a few notable endorsements, including from Iowa Republican Steve King, who is a hard-liner on immigration like Ward, and Rand Paul.

There’s quite a bit of time between now and the Aug. 28 primary election. The attention paid to this race will surely increase as it gets closer to the vote, especially given how pivotal this election is to both Republicans and Democrats in deciding who controls the Senate. Yet to be determined is just how much Bannon’s one-time endorsement of Ward will hinder or help her chances, but Trump’s endorsement will likely be the one that matters in this race. Whether that helps her or any other Republican candidate come November is an entirely different story.