Right-wing Senate candidate Kelli Ward was endorsed by a publication that does not exist. It's really nothing new 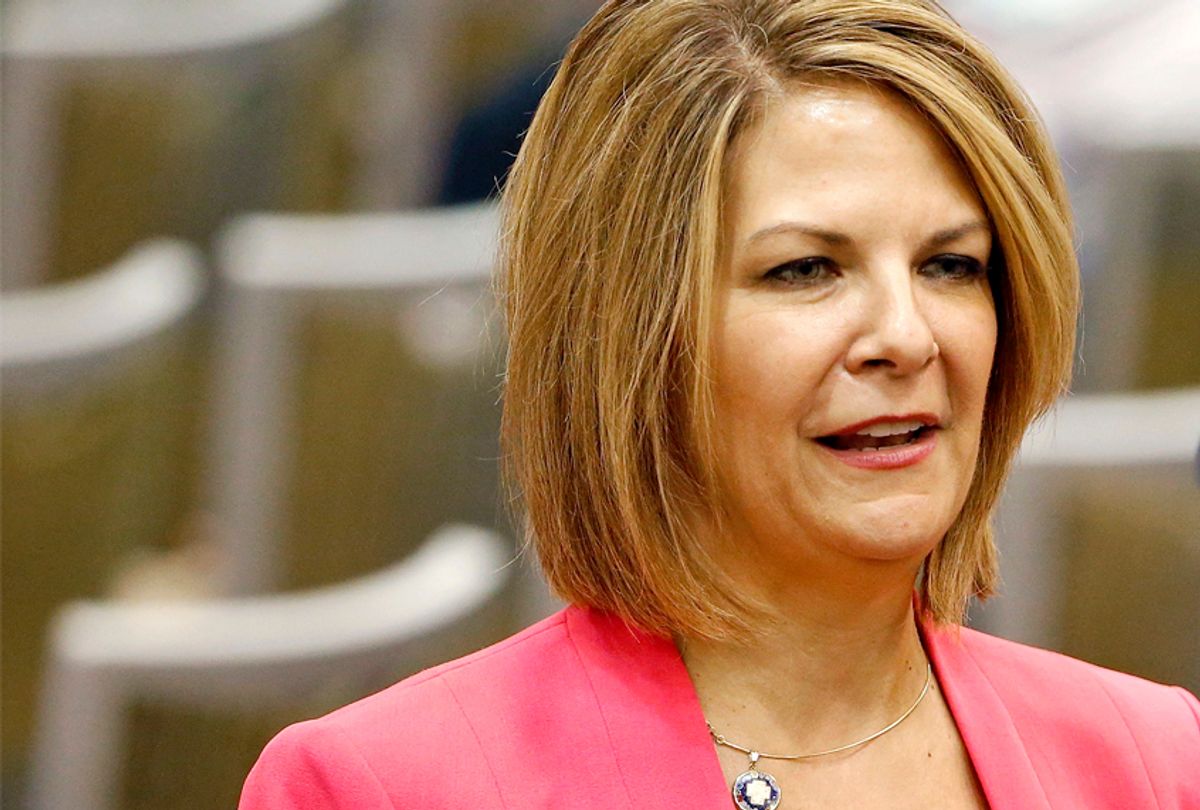 On Wednesday, far-right Arizona U.S. Senate candidate Kelli Ward, who is running for the seat being vacated by Sen. Jeff Flake, became the latest Republican politician linked to a fake website when Politico reported that she had promoted an endorsement from something called the Arizona Monitor. There is no reputable publication of that name.

After the Politico piece went live, whoever operated the Arizona Monitor site apparently tried to erase its existence from the web, including deleting its Twitter and Facebook accounts as well as the website itself.

No one contacted by Politico reporters Jason Schwartz and Shawn Musgrave appears to know who was pulling the levers behind the now-erased website. During its extremely brief history, no information about who owned or operated the site was readily available.

Ward and her staff have claimed ignorance of the Arizona Monitor's origins as well but have continued to defend their promotion of the bogus website.

“When sites present themselves as credible, I think you have to do your due diligence and look into them,” Ward spokesman Zachery Henry told Politico. “When it’s opinion, you have a little more leeway.” As of this writing, the candidate has not removed a page on her own website that reprinted a portion of the Monitor’s Oct. 28 endorsement.

While the identity of the people behind the Monitor still remains a mystery, the practice of creating publications designed to hype candidates and causes is a well-established one in Republican politics. Long before the discussions of fake news and Russian bots seeped into the national dialogue, GOP election consultants were setting up fake websites designed to look like legitimate journalistic outfits, industry promotion groups masquerading as think tanks and fictitious social media profiles designed to look like real people.

A political action committee that supported Hillary Clinton engaged in similar techniques during the 2016 campaign, paying for anonymous online accounts to flack for the candidate. But the idea of undisclosed shilling has a much longer history on the political right, originating in part from the fact that conservatives' anti-government viewpoints are enormously unpopular.

That’s why there's an entire cottage industry of conservative PR agencies dominated by fake think-tank impresario Richard Berman, whose primary professional endeavor is setting up front groups that paint an illusory picture for the press and the public that millions of Americans want looser regulations on polluting industries, more freedom for banks to squeeze their customers and lower wages for unskilled workers.

A number of Republican operators have also been linked to so-called "scam PACs," unofficial campaign groups that purportedly work on behalf of popular conservative politicians like South Carolina Rep. Trey Gowdy but seem to mostly just line the pockets of their executives.

For many decades, there's also been a flourishing business of grifty "news" publications which hawked bogus herbal cures to gullible right-wingers, long before conspiracy radio talk show host Alex Jones was even born.

But even major GOP politicians and consultants have gotten into the fakery business.

During the 2012 Republican presidential primaries, then-candidate Newt Gingrich cited his following on Twitter as proof that his campaign was stronger than his low donation totals and poorly attended rallies indicated.

Ultimately, the former House speaker's claims about his campaign’s strength proved incorrect: He was only able to win two state primaries. But long before the voting started, Gingrich’s boast about his Twitter following was undermined when Gawker reported that his campaign had been paying PR agencies to create fake Twitter accounts to boost his stats. A later independent analysis claimed that only 8 percent of Gingrich’s Twitter fans were real.

Gingrich was not the only Republican politician who appears to have paid for fake followers. Several people involved with GOP politics during that time have told me that tweets based on speeches delivered by Republican politicians at the 2012 CPAC grassroots conference received massive numbers of retweets from random accounts, including at 4 a.m. Eastern Time. The bots’ favorite pol was Gov. Scott Walker of Wisconsin, but he was far from the only one.

More recently, other GOP organizations have set up full-scale propaganda outlets, including the Free Telegraph, a website with a design vaguely similar to the left-leaning politics site Talking Points Memo but actually owned and operated by the Republican Governors Association. In operation since July of 2017, the site bore no informational notices about its ownership until the Associated Press began an investigation into it in September. Even now, the site's homepage does not disclose that it is run by the RGA. At the time the Free Telegraph was created, Walker was RGA chairman.

Several months after the Free Telegraph was launched, in October, California Rep. Devin Nunes, the House Intelligence Committee chairman who has spent months concocting embarrassing deflections from the Russia scandal, got into the fake news act by establishing his own propaganda site, the California Republican. His site does at least disclose its ownership.

Elsewhere, GOP propaganda has been flooding the state of Maine thanks to the efforts of Jason Savage, the party's executive director, who started churning out YouTube videos in February of last year entitled "News You Can Trust."

"The purpose of this News You Can Trust is to give you the news without the spin of the liberal media and have you get our perspective on the important issues of the day," Savage said in the series' first episode. Since that time, the party has released dozens of poorly produced segments praising President Donald Trump, Maine Gov. Paul LePage and other local politicians.

Savage also appears to have had a hand in operations of an anonymous website called Maine Examiner, an ostensibly local news blog which also happens to exclusively attack Democratic politicians in the state. The site was mostly ignored until it falsely claimed that a Democratic mayoral candidate had insulted citizens of his own city as "a bunch of racists," a smear that left-wing activists think was responsible for his 145-vote loss.

After critics began poking around the Maine Examiner's website, they discovered that several photos it had used were created by Savage, according to their metadata. Savage's name was also found on the site's error messages. He has not addressed the charges but may soon be forced to by the state's Commission on Governmental Ethics and Election Practices which will convene on Feb. 22 to hear a formal complaint against him.

The problem of undisclosed conflicts of interest also exists at larger, more high-profile conservative outlets which are not directly controlled by party apparatchiks. In the lead-up to the 2016 election, former Breitbart News editor Ben Shapiro set up a blog called the Daily Wire, without disclosing to his readers that the site was owned by Dan and Farris Wilks, the two biggest donors to the presidential campaign of Texas Sen. Ted Cruz. The site, and Shapiro, tirelessly flogged Cruz’s candidacy throughout the GOP primary season without ever bothering to mention the immense conflict of interest. The Daily Wire even had the gall to call various conservative talk show hosts "in the tank" for Trump.

A similarly manipulative situation was in effect at Breitbart News in 2015 and 2016. While the site later became strongly loyal to Trump, during most of the Republican nominating contest, Breitbart shamelessly flacked for Cruz. This was no surprise considering that the Texas pol's other biggest donors, Robert and Rebekah Mercer, were the primary funders of the publication. This fact was almost never disclosed to Breitbart readers.

Even Fox News was once in the business of fake websites. As Salon reported last year, the company's founder, Roger Ailes, once paid for the creation of a series of anonymous and shockingly sexist blogs to market his channel.

Given the extensive history of conservative fake news, an entirely fictitious publication like the Arizona Monitor is no huge surprise. There's no clear evidence that the Monitor was a wholly-owned subsidiary of Kelli Ward's campaign -- or the creation of her donors and backers -- but that's the most reasonable inference to draw, and it fits into the long Republican tradition of just making stuff up.