Which Mitt will run for Senate in Utah? Look to the former GOP presidential candidate's campaign video for clues 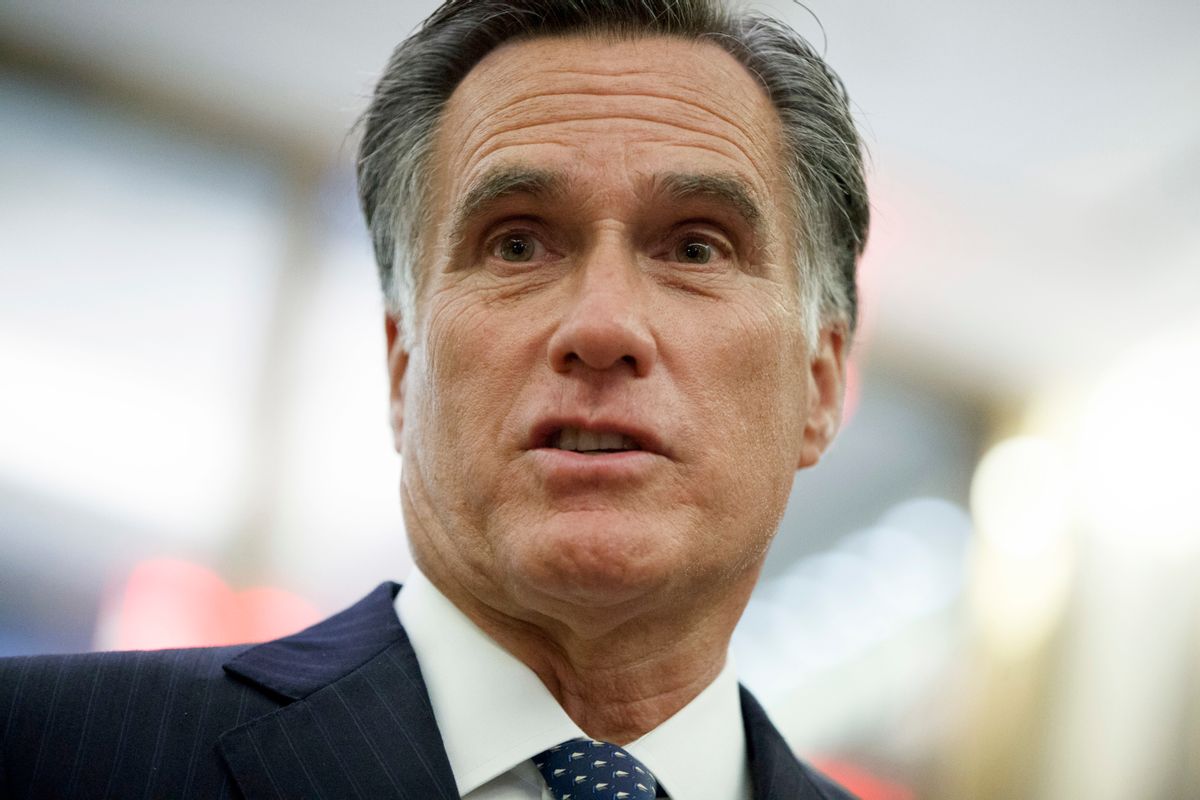 FILE - In a Tuesday, Nov. 29, 2016 file photo, former Republican presidential nominee Mitt Romney talks with reporters after eating dinner with President-elect Donald Trump at Jean-Georges restaurant, in New York. Romney’s “binders full of women” are actual binders after all _ filled with the resumes of women who hoped to land jobs in his administration as governor. The Boston Globe reports Tuesday, April 11, 2017, that it was shown the binders by a former Romney aide. The two white three-ring binders contain about 200 cover letters and resumes with some handwritten notes. (AP Photo/Evan Vucci, File) (AP)
--

A Romney Utah Senate campaign had long been in the cards. Even though he had once been elected as the governor of Massachusetts, it's been clear for some time that Romney could never win an election again in the state. On Friday, Romney made it official.

While slightly chiding a "message of exclusion" from Washington politicians, Romney's opening message was overwhelmingly focused on how great Utah is and how Romney is going to bring the Beehive State's culture of civil politics to the U.S. Senate. He also highlighted his role in running Utah's 2002 Winter Olympics. He also took a couple of not-so-veiled swipes at Trump's agenda.

"Utah welcomes legal immigrants from around the world," Romney said in the video released today. "Washington sends immigrants a message of exclusion. And on Utah's Capitol Hill, people treat one another with respect."

While some of President Donald Trump's opponents are fondly recalling the searing speech that Romney delivered against him almost two years ago in which he called the former game show host a "con man" and a "fake," the odds of that happening again are pretty low since Trump has only become more popular in Utah and among Mormons, the state's largest religious group.

While a majority of Utahns voted against Trump in the 2016 presidential election, his approval rating stood at 52 percent in October. No newer polls have been conducted since then but it's likely that Trump's numbers have only increased since his national approval rating has edged up in recent months. Among Mormons, around 61 percent nationwide say that they like Trump's performance -- the highest of any faith denomination.

Trump has also lessened the chance of fireworks with Romney by not saying anything bad about him during the entirety of 2017. The president actually praised him as a "good man" during his last trip to Utah.

While Romney has the backing of most of Utah's powerful politicians, his return to the state was not universally hailed. Rob Anderson, the chairman of the Utah Republican Party blasted him in an interview with the Salt Lake Tribune

“I have two questions for Mitt. First of all, why? And how do you expect to represent Utah when you don’t live here?” he said on Thursday.

“I think he’s keeping out candidates that I think would be a better fit for Utah because, let’s face it, Mitt Romney doesn’t live here, his kids weren’t born here, he doesn’t shop here,” the GOP official said.

Anderson's comments appear to have been sparked by what he said was Romney's unwillingness to speak to him as he considered a possible Senate run. After the Tribune published his criticism, Romney called him up and Anderson apologized.

While Romney is despised by some conservative activists for his failure in 2012 and his willingness to create a healthcare plan that became the inspiration for the Affordable Care Act, they won't have much to inspire opposition as long as Romney avoids extensive confrontation with Trump. That's quite likely, especially considering that Romney has been conferring with fellow Mormon Jeff Flake, an Arizona Republican senator who has seen his political career destroyed by advocating for the budget-cutting, pro-immigration, and pro-trade agenda that had dominated the GOP before Trump came along.

“I think you’ll hear him say ‘I’ll agree with the president when he’s right, and disagree with him when he’s wrong,’” Flake told Politico. “I know he’ll be an independent voice.”