Peter Thiel had a co-conspirator in masterplan to bring down Gawker: report

A man identified as Australian citizen was the mastermind to bring down Gawker, according to BuzzFeed 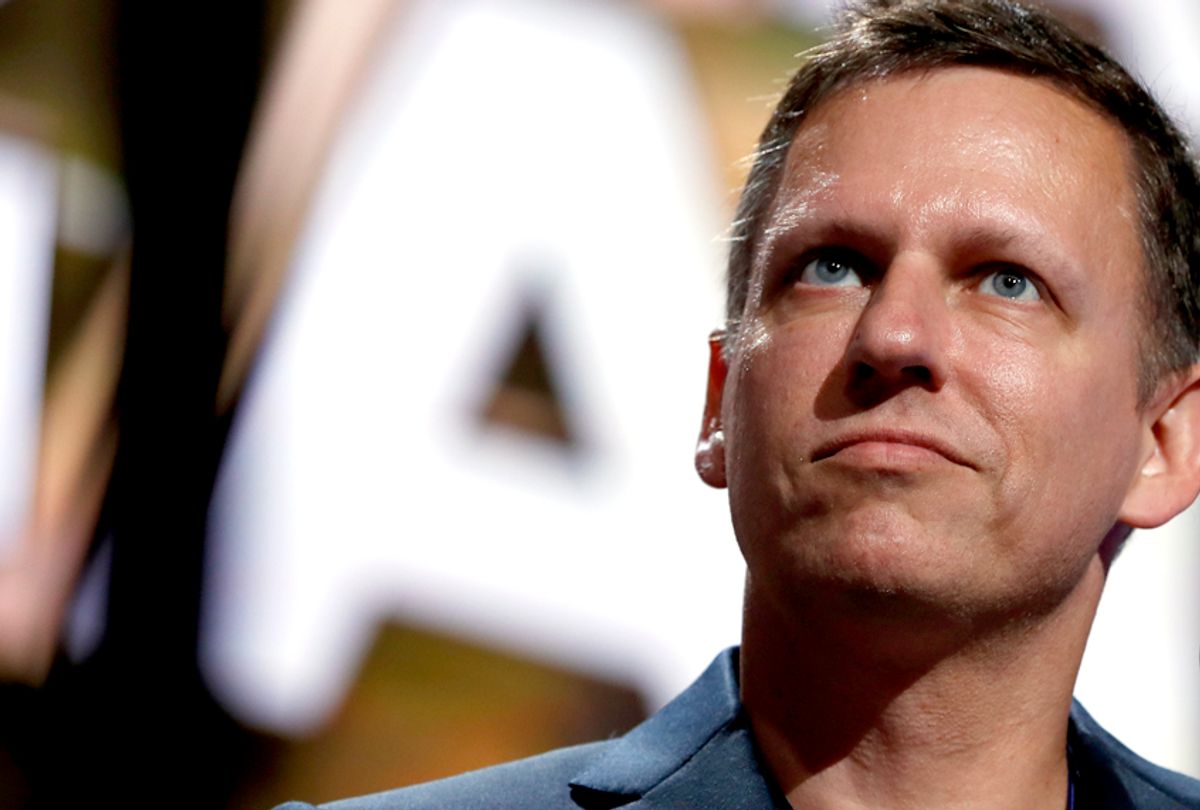 Unfavorable coverage of billionaire venture capitalist Peter Thiel in the digital pages of Gawker allegedly caused the anti-democracy libertarian to seek vengeance against the gossip site, a personal vendetta that culminated with him furtively bankrolling wrestler Hulk Hogan's lawsuit against the site that resulted in its demise.

However, a new BuzzFeed report claims Thiel had a co-conspirator — another aggrieved party who may have been interested in destroying Gawker before Thiel. While the details of collaboration are hazy — whether fate or meeting of the minds — their desired outcome was seemingly mutual and clear. The man in question was one Aron D’Souza, according to BuzzFeed, who is an Australian citizen and Oxford law graduate, and was known around Thiel’s circles as “Mr. A.'" A source told BuzzFeed News that the two dined together in spring 2011, long before the now-infamous Gawker–Hulk Hogan lawsuit.

“D’Souza was aware of Thiel’s public comments likening [Gawker blog] Valleywag to al-Qaeda, and presented a brazen idea: Pay someone or create a company to hire lawyers to go after Gawker,” BuzzFeed writer Ryan Mac explains.

Recall that Thiel—who has publicly supported Trump, and spoke at the Republican National Convention in 2016 — financed Hulk Hogan's lawsuit against Gawker Media, helping to purposely bankrupt the online magazine. Hulk Hogan, stage name of Terry Gene Bollea, had sued Gawker for posting a sex tape of him; Thiel's involvement in bankrolling the lawsuit was only revealed after the trial had concluded, and expounded upon further in a 2017 Netflix documentary "Nobody Speak: Trials of a Free Press."

Three sources confirmed to BuzzFeed News that Melbourne-based D’Souza, who has few public connections to Thiel, was the mastermind of Thiel’s legal strategy. On LinkedIn, D’Souza says he finished his Oxford law studies around 2011, and later went on to found the Australian branch of the Nexus Youth Summit, a Clinton Global Initiative–connected philanthropy organization. He was also the founding editor of a quarterly legal philosophy publication called the Journal Jurisprudence and is an honorary consul of the Republic of Moldova in Australia.

While "Mr. A's" alleged motive remains unknown, in a separate interview in The Atlantic with Ryan Holiday, author of Conspiracy: Peter Thiel, Hulk Hogan, Gawker, and the Anatomy of Intrigue, it might have been as simple as not liking Gawker.

"There is a line from Mr. A [in the book] where he says the more they studied Gawker, the harder it was to find good,"Holiday said in the interview. "And when you look at some of these stories with the distance of time, it was extraordinarily difficult to find that sort of humanness and sympathy."

Holiday didn't reveal the identity of "Mr. A," but says Thiel likely saw "Mr. A" and his plan as an investment--like any venture capitalist would.

"At the time, Peter had figured out all the things that wouldn’t work," Holiday said. "But he recognized the potential in Mr. A’s plan the way a venture capitalist recognizes a great idea. Here, he thought, I have the right person behind the right idea, and I’m going to support it."

In 2016, it was revealed that Thiel was the financier behind the lawsuit, and in an interview with the New York Times, he never hinted at conspiring with  a collaborator--but he did say his effort to bring Gawker down was "less about revenge and more about specific deterrence."

"I saw Gawker pioneer a unique and incredibly damaging way of getting attention by bullying people even when there was no connection with the public interest," he told The New York Times in a 2016 interview.