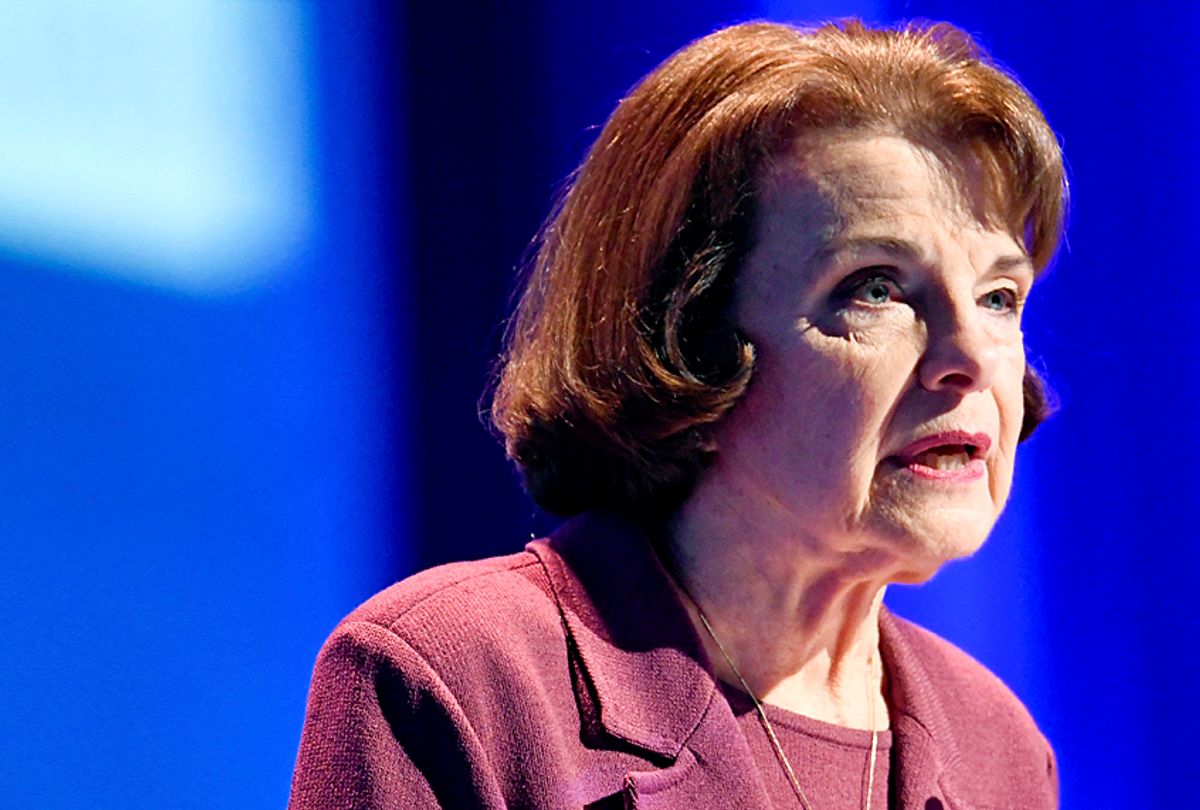 What happens when a blue wave crashes into one of the bluest states in the union? Ask Dianne Feinstein.

The long-time California Democratic senator failed to secure her own party’s endorsement, coming in nearly 20 percentage points behind her primary challenger among delegate votes at the state party’s annual convention in San Diego over the weekend. State Senate leader Kevin de León, who is challenging Feinstein from the left, won the support of 54 percent of the Democratic delegates, compared to 37 percent support for Feinstein.

Both fell short of the 60 percent needed to secure the party endorsement, but the shock result served as a jolt of energy for the state’s progressive base as well as a clear warning shot for Feinstein, a prominent figure been in California politics since she was first elected to the San Francisco Board of Supervisors in the 1970s. (She became that city's mayor in 1978 after the assassination of Mayor George Moscone alongside Supervisor Harvey Milk.)

Nearly two-thirds of the party's delegates voted against Feinstein, a startling result whose meaning should not be minimized -- although it's still likely she will be re-elected. She leads de León and other primary opponents by double digits in the polls and has substantially more campaign cash on hand. But the party convention result is another sign pointing toward major Democratic victories in the fall.

California has become one of the most liberal states in the nation, yet during her 25 years in the Senate Feinstein has voted for such Republican-friendly policies as the George W. Bush tax cuts, the invasion of Iraq, the Patriot Act, and warrantless spying on U.S. citizens. Even as the party’s platform reaffirmed a commitment to marijuana legalization over the weekend, Feinstein has remained committed in her opposition to the drug, whose recreational use is now legal statewide. While Feinstein has a strong record of supporting a ban assault weapons — an issue currently of top concern to Democrats — she found herself talking about gun control to a mostly quiet crowd at Saturday’s convention.

Being disconnected from the Democratic base is a familiar place for Feinstein. As a candidate for governor in 1990, Feinstein was denied the party’s endorsement at that convention too -- and was even booed during her speech for affirming her support for the death penalty. (In an odd twist, the Republican candidate who defeated her, then-Sen. Pete Wilson, resigned his Senate seat to become governor. Feinstein ran for Wilson's vacant seat in the subsequent special election, and won. She's been in the Senate ever since.)

But what happened to Feinstein this weekend wasn’t just about her, or her mixed political record. Although personal issues like her age -- if Feinstein serves a fifth full Senate term, she would still be in office at age 91 -- have often been cited as the source of discontent amongst voters, national politics looks to be playing an outsized role in the Golden State.

Democrats for months have pointed to California as the driving force in the anti-Trump resistance movement. But according to 538’s "Trump score," which determines how often a member of Congress has voted with the president, Feinstein is the most out of step with her constituents of any Democratic senator.

Trump, who will reportedly make his first visit to California as president next month, has targeted the state over its support for so-called sanctuary cities. Last week, he threatened to pull immigration enforcement officers out of the country’s most populous state in retribution.

Although Feinstein has notably shifted toward the left of the Democratic caucus on issues involving the status of the "Dreamers," undocumented immigrants brought to the United States as children, de León's long-term support of immigrants was one of the biggest issues that propelled him ahead of Feinstein among party’s activists. Her harsh rhetoric about "illegal" immigration from the 1990s is currently being used by right-wingers in national campaigns against immigration reform.

Calling himself "the president of the most progressive legislative house in America,” de León took a not-so-subtle dig at Feinstein’s troubled record on the most contentious issue of the Trump era, promising party activists over the weekend: “You’ll never have to guess where I stand."

Like California’s other leading Democrat, House Minority Leader Nancy Pelosi, Feinstein appears disconnected and out of touch on the other big issue for Democrats: health care. While a majority of registered Democrats statewide support single-payer health care, Pelosi and Feinstein, a pair of upper-crust San Franciscans, oppose such plans. (As McClatchy’s Emily Cadei noted, Pelosi, whose district comprises nearly the entire city of San Francisco, “is the most right-wing candidate in her reelection race this year.” Pelosi faces three left-wing Democrats and a Green Party candidate, but probably no Republican opponent.)

Supporters of Feinstein point to her experience and seniority on the Senate’s Judiciary and Intelligence committees, and vaguely suggest that challenging her from the left may damage Democrats' chances in the fall. It's at least as likely that the opposite is true. Democrats hope to pick up as many as 10 battleground House seats in California, and turnout will be crucial. A competitive Democratic primary will almost certainly increase turnout, and the general election in November -- under California's top-two system -- will likely be between de León and Feinstein. No Republican running for Senate or governor in California this year has even cracked double digits in public polls.

Aligning more closely with what Democratic voters actually want is almost certainly the path to victory. Consider the first special election of 2018, to be held in two weeks in a Trump-friendly congressional district of Pennsylvania. Even running against a Trump supporter in a district Trump won easily, moderate Democrat Conor Lamb is running ads against Nancy Pelosi.

Those who are concern-trolling Democrats over the party’s primary politics must see the writing on the wall. As Democrats continue to grow their polling advantage ahead of the November midterms, expect weeping and wailing over a potential "Tea Party of the left" -- i.e., puritanical and intolerant -- to grow louder. But what happened to Dianne Feinstein over the weekend can hardly be compared to the Tea Party takeover of the GOP in 2010.

Democrats who fear a competitive primary season are writing a prescription for a stalemate election, more Beltway paralysis and their own irrelevance. Those who see the wave coming, take advantage of the energy to turn out voters and then seek to pass a genuinely progressive agenda may have a future.