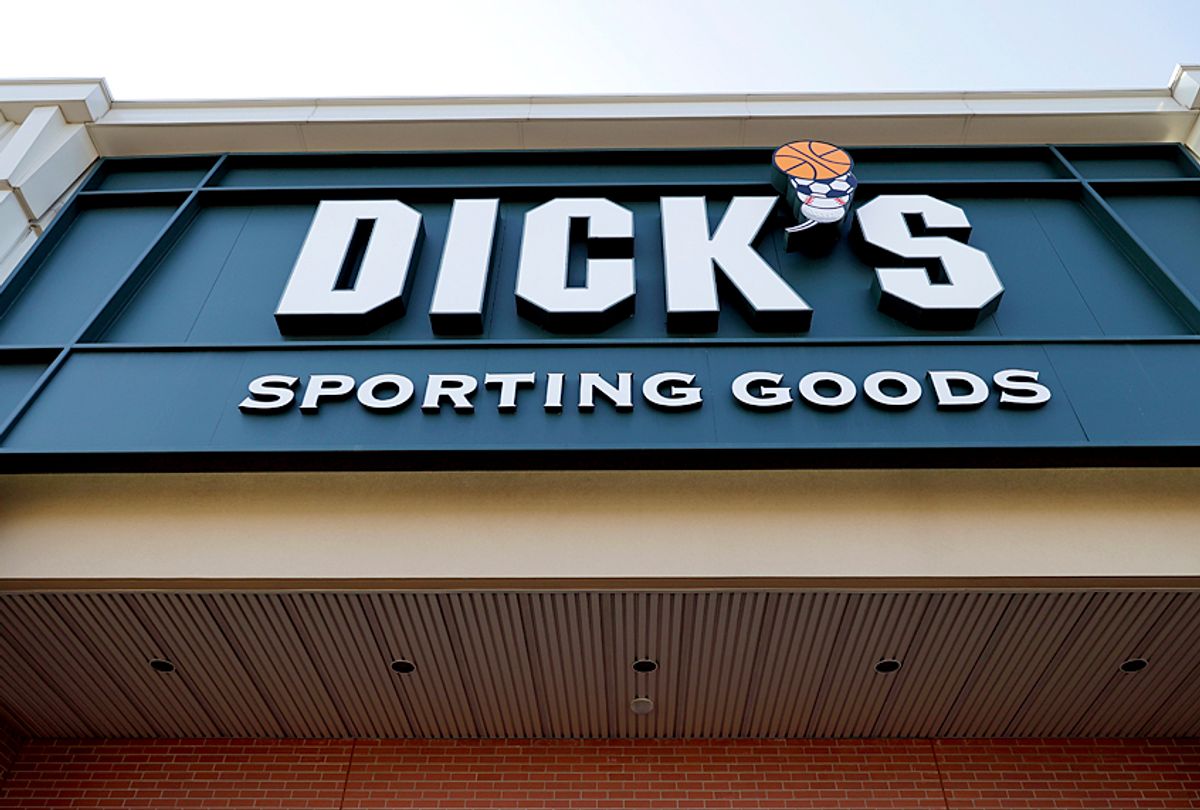 It's a shift so many of us have been waiting so long for. Through so many tragedies, so many dead kids. So many empty thoughts and prayers. A move in a saner direction. A move spearheaded this time not by grieving parents or progressive elected officials or traumatized teens. A move from people who love their guns.

Appearing on "Good Morning America," the company's Chairman and CEO Edward Stack spoke of the February 14 Parkland mass murder, saying, "We were so disturbed and saddened by what happened, we felt we really needed to do something." In November, the Parkland suspect purchased a shotgun from a Dick's in Florida. "It wasn't the gun nor the type of gun that he used in the shooting," Stack recalled. "We did everything by the book, and still, he was able to buy a gun…. The systems that are in place, across the board, just aren't effective enough to keep us from selling someone a gun like that."

Dick's has not behaved heroically on this issue in the past. As George Stephanopoulos mentioned during Wednesday's interview, after Sandy Hook, it implemented a ban on assault weapons in their stores. But in 2013, the company launched a Field & Stream chain and did offer them there. Now, "Based on what's happened, it moved us all unimaginably," said Stack. "We said, 'We need to do something. We're taking these guns out of our stores permanently.'" He added that he will "never" reverse this decision, and that "If the kids can be brave enough to organize like this, we can be brave enough to take these out of here."

What makes this Wednesday decision unique is that it is no way a capitulation of the values that many gun owners share. Dick's hasn't gone all snowflake, to use the parlance of trolls. In its statement, the company affirmed that "We support and respect the Second Amendment, and we recognize and appreciate that the vast majority of gun owners in this country are responsible, law-abiding citizens." It's simply taking what would to most normal humans appear completely sane and logical safety precautions.

As The New York Times reported Wednesday, AR-15s operate "in much the same way that many American soldiers and Marines would fire their M16 and M4 rifles in combat." They've been the weapons of choice in the deadly attacks in Newton, Las Vegas and San Bernardino, as well as the recent Parkland massacre. Marine Corps veteran Joe Plenzler told the Times, "They are the Formula One cars of guns, designed to kill as many people as quickly and efficiently as possible. We are seeing battlefield-level casualties because we are allowing those weapons on our street." That's unconscionable.

Yet those of us who don't own guns ourselves have felt the pushback for our calls for reasonable regulation. Debates about limits devolve into fears that we're coming to take away our neighbors' freedoms. It's what repeatedly stalls any forward momentum. Guys like Marco Rubio say, with a straight face, "Banning all semi-auto weapons may have been popular with the audience at #CNNTownHall, but it is a position well outside the mainstream." Then even incremental changes are rejected, the cycle repeats and more children die at the hands of angry young man with a weapon of warfare.

There will inevitably be those who see Dick's as caving to pressure, and others who say it's too little, too late. But what's the alternative, for any side? Digging in forever, refusing to grow and change? Earlier this week, an op-ed in The Washington Post called for us to "stop sucking up to 'gun culture,'" saying, "The gun-owning camp, we regularly hear, is more motivated by the issue." But not all hunters and handgun owners are extremists. For Dick's to make abundantly clear it is still a member of the gun owning community doesn't stigmatize its numerous less radical patrons. And it says that there is room in the conversation for people who love the Second Amendment, but value their children's lives more. As a successful retailer, Dick's has a power few of us do, and a conscience that our elected officials in the pockets of the NRA don't. God willing, its decision today will motivate other businesses to follow suit. And if the company can achieve what a legion of grieving mothers, pleading their representatives for change, could not. I'll take it. With gratitude.