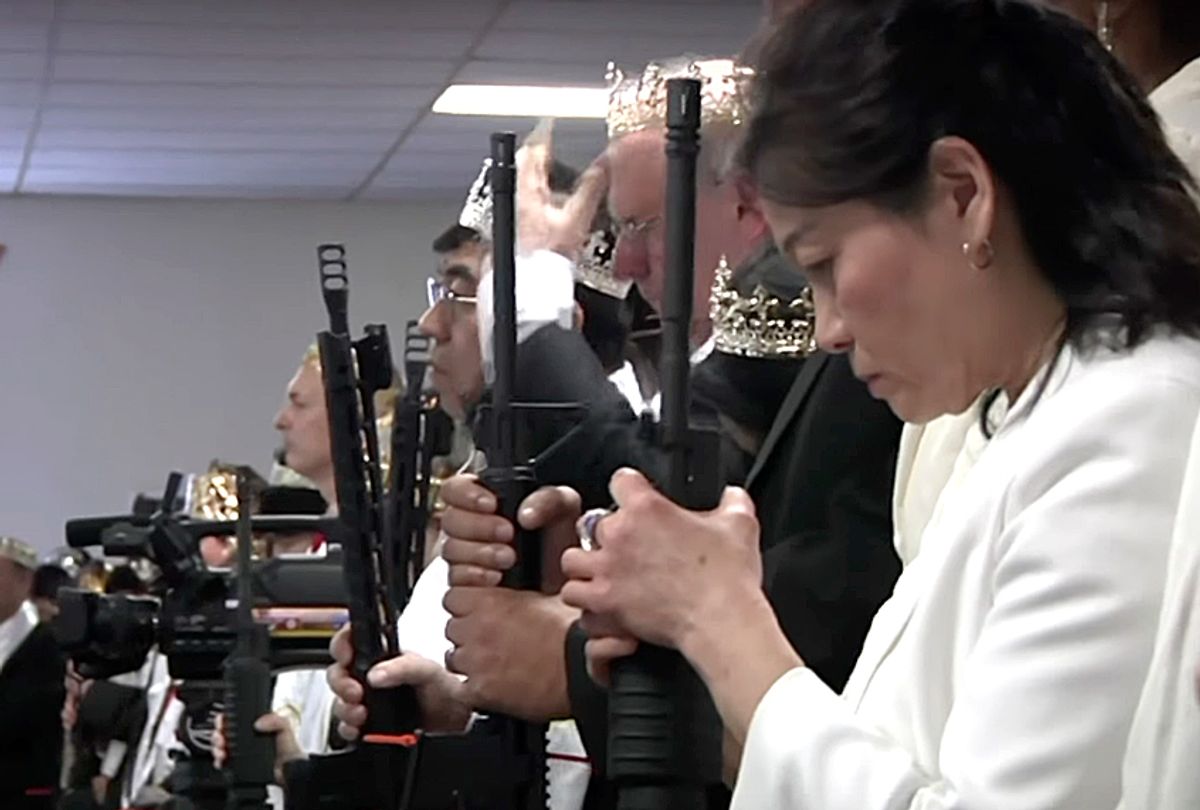 A religious event at a Pennsylvania church Wednesday looked more like a gun show, as hundreds of churchgoers brought in and blessed AR-15s during a commitment ceremony. A nearby elementary school moved its students to another campus, CBS reported, and protesters demonstrated outside the religious institution.

The church event was a marriage renewal ceremony led by Pastor Hyung Jin Moon at the controversial World Peace and Unification Sanctuary Church in Newfoundland. The institution believes the assault rifles symbolize the "rod of iron" from the book of Revelation in the Christian Bible, according to CBS. Inside, the men donned crowns on their heads and women wore wedding gowns, as couples exchanged or renewed their vows while clutching unloaded AR-15s, secured with zip ties.

The AR-15 is the same weapon used by suspect Nikolas Cruz, authorities say, during the Parkland, Florida school massacre last month. While members of this church said the ceremony was planned long before 17 people were killed at Marjory Stoneman Douglas High School, protestors were angered by the display and by the lack of sensitivity to the Parkland victims and survivors. The religious event "doubled as an advertisement for the Second Amendment," and one attender told CBS: "People have the right to bear arms, and in God's kingdom, you have to protect that. . . You have to protect against evil."

Since the Parkland shooting, gun control has consumed the national conversation. It has prompted teenagers, many of whom just survived a massacre, to be on the front lines calling for sensible gun safety laws and for lawmakers to have any response, beyond thoughts and prayers, to the school shooting epidemic. But on the other side, conservatives have doubled down on their usual hard line: protect the Second Amendment at all costs. There is theoretically no middle ground anymore.

This new territory has been demonstrated as companies sever ties with the National Rifle Association and stores reevaluate their firearms inventory. On Wednesday, Dick's Sporting Goods announced an end to the sale of assault rifles and said the company would raise the age limit of firearms purchase to 21. Walmart closely followed suit. "We take seriously our obligation to be a responsible seller of firearms and go beyond Federal law by requiring customers to pass a background check before purchasing any firearm," the company said in a statement.

The current momentum, from kids, companies and fed-up American citizens, illuminates that this time the conversation about guns is different. Politicians can no longer hide behind the Second Amendment or NRA sponsorships or "thoughts and prayers," especially as teenagers lead the call for action. But as fervent as these student activists are, the Pennsylvania church event featuring AR-15s reveals that the fight for common-sense gun safety laws is still an uphill battle.