No fairy tale: "The Magicians" conjures empowerment after violation 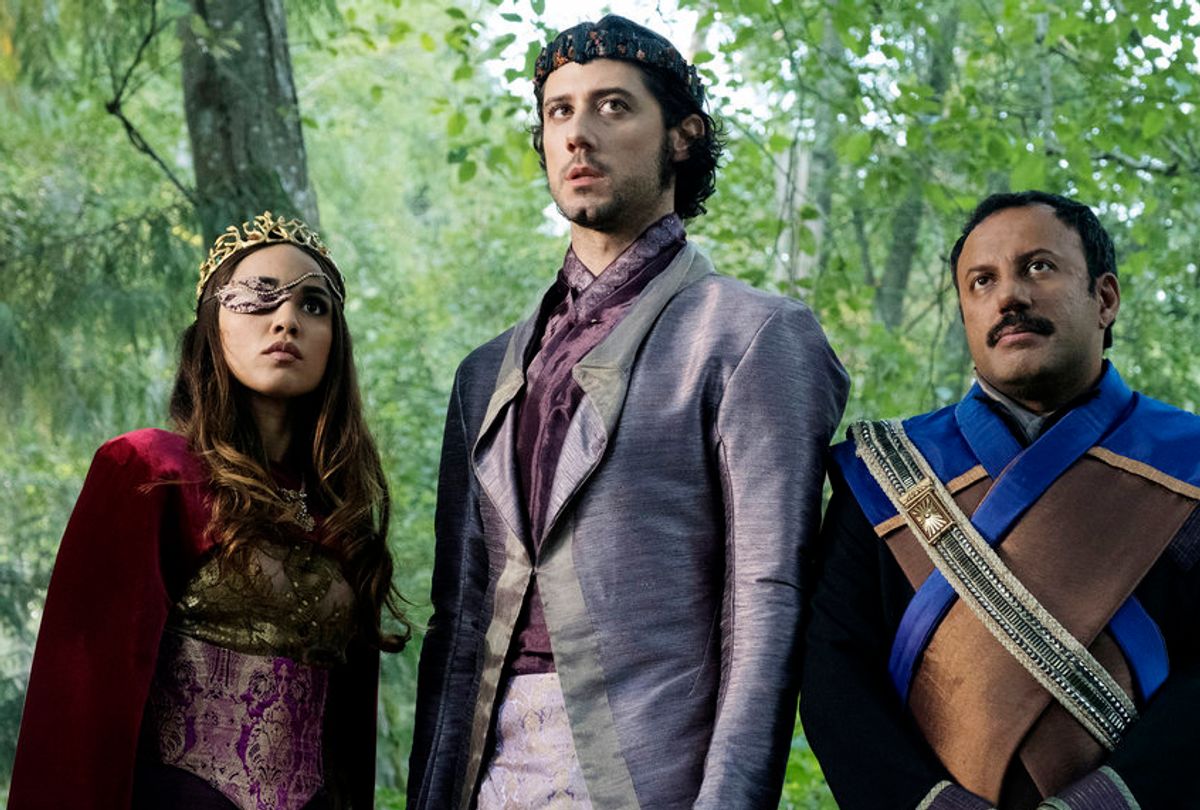 Next week, “Marvel’s Jessica Jones” returns for its second season. In its first, the Netflix series won acclaim for its portrayal of trauma and recovery via its titular heroine, a whiskey-swilling private investigator whose feelings are only slightly harder than her liver. Jessica is uneasy about possessing heightened strength; she doesn't broadcast it, and resents any attention she gets for it. But her true superpower comes from surviving sexual assault, confronting the man who violated her and finding her way past that pain.

At the beginning of “Jessica Jones,” Jessica’s coasting and coping until she witnesses an event meant to trigger her. By the end of the finale she’s triumphed over her victimizer and reclaimed a measure of control over her sense of stability. Abilities notwithstanding, that show’s survival arc is fairly straightforward in its presentation.

Expanding that metaphor of trauma and survival through every nook and cranny of a world, and numerous storylines, requires a wholly different level of skill and imagination. A touch of sorcery, even.

Syfy's “The Magicians” is more than halfway through a third season defined by a quest to restore magic to the universe, a place where the world as we know it plays host to gods, mythical creatures are real and some humans have (or used to have) the ability to cast spells. When magic flows, Brakebills University connects to a Narnia-like realm called Fillory as well as other strange corners of the cosmos. Its removal throws the world into disarray and places the magical institution where 20-something students honed their skills in a graduate magical pedagogy program, on the brink of closure.

Thus, the story’s heroes are seeking out seven magical keys said to have the power to switch the mystical lights back on.

The third season of “The Magicians,” currently airing Wednesdays at 9 p.m., has split the show’s core characters off on their own adventures: Quentin Coldwater (Jason Ralph) pursues the quest with gusto, crisscrossing subplots with other characters. In Fillory, high rulers Eliot Waugh (Hale Appleman) and Margo Hanson (Summer Bishil) fend off fairy usurpers and have pissed off their human subjects.

Quentin’s found-and-lost love Alice Quinn (Olivia Taylor Dudley) is desperate to restore magic because it gives her strange life meaning; she once tasted life as a demonic, all-knowing entity and feels useless without powers. Meanwhile their nonchalant companion Penny (Arjun Gupta) is trapped in a state of astral projection — not living but not quite dead.

Along the way Eliot and Margo have been thrust into diplomatic quandaries involving sexual consent, the strangest of which involves the High Queen preventing her sentient ship from being raped by a pirate vessel that also has a consciousness. Fans of “The Magicians” liken it to “Buffy the Vampire Slayer” with good reason: explaining its twists to anyone who doesn’t watch runs the risk of making you sound a little touched in the head.

But if you know the series' longer arc it's clear that executive producers Sera Gamble and John McNamara know exactly what they’re doing and have been creating an overarching restoration tale out of several storylines involving violation, whether real or inferred.

Lev Grossman’s trilogy of novels sustained criticism for the author's habit of exploiting female trauma to further Quentin’s emotional development. A graphically described rape of Quentin’s childhood friend Julia, played in the series by Stella Maeve, was the most egregious example of this. But rather than leaving that crime out of the series, Gamble and McNamara kept it and made it a central part of the characters’ storyline. The trick this season is that while everyone else is powerless, Julia contains magic — granted to her by the mother of the god that assaulted her, as an offering of apology.

Julia, understandably, is not fine with this. She attempts to give it away, to no avail. In recent episodes she’s been learning to live with the idea that this power that once belonged to an evil sociopath of a divinity is now hers. Instead of allowing the nightmare she lived through to tear away at her dignity, she’s finding a way to reframe it into a force for good.

In a sly way, the writers seem to be reflecting elements of Julia’s reconciliation with her personal horror in other subplots. A significant reveal in the season’s B-story involves the sickening realization that something is allowing the wealthy to retain some of their magical perks; this is partly achieved by mutilating their slaves. Penny loses his body when he projects his spirit outside of it to avoid dealing with an agonizing, anesthetic-free surgery of sorts. In the series, this is a feat of magic. In the real world, survivors of abuse know this as disassociating, and that could make it comforting to see Penny develop a way to seize some agency while being stuck between worlds.

Even the keys themselves are assigned abilities beyond merely opening doors. Touching one allows the bearer to see things as they truly are, with the side effect of queasiness. Another loops time. Others create illusions or seek to cripple the person holding it by relentlessly nagging him or her with the darkest thoughts about themselves. It’s as if the writers have manifested therapy breakthroughs they or their friends have experienced into the season’s most important props. More than this, where the fable of the seven keys in Grossman’s books was a standard hero’s quest, featuring a man trying to free his daughter, in the series the fable depicts the daughter as the brave protagonist.

Then again, they have to find some way to extend the tale. Although Syfy’s version of the series has departed in a number of important ways from the books — starting with a distinct emphasis on empowering its female characters as opposed to Grossman’s focus on Quentin — the quest for the seven golden keys is the part of the book’s final journey. Syfy just renewed “The Magicians” for a fourth season, placing the onus on the producers to conceive the next chapters themselves.

A viewer may simply choose to consume this season as a cheeky adventure pitting saucy millennials against uptight fairies in Fillory, and Penny and his lover Kady (Jade Tailor) against a rules-obsessed establishment, with Alice setting out for herself and Quentin struggling to keep the world from falling apart. It’s probably the most entrancing fantasy available on television right now, to be sure.

When a person recognizes that living in these times is akin to existing in a state of mass violation — of democratic norms, rule of law, of the concept of decency itself — then “The Magicians” takes on a much bigger meaning. On one level, it’s an allegory illustrating the ways that uncertainty and darkness can bring out the best in us. That it’s possible to not only survive terrible things, but to transition from survival to reconciliation, to transform pain into something greater than simple positivity. That even without magic, we have abilities to make it to the other side of this insane, grim journey. And, at least for the foreseeable future, this isn’t where our story ends.