"But maybe we just take everyone's guns away. Nobody is allowed to have a gun — not even whites." 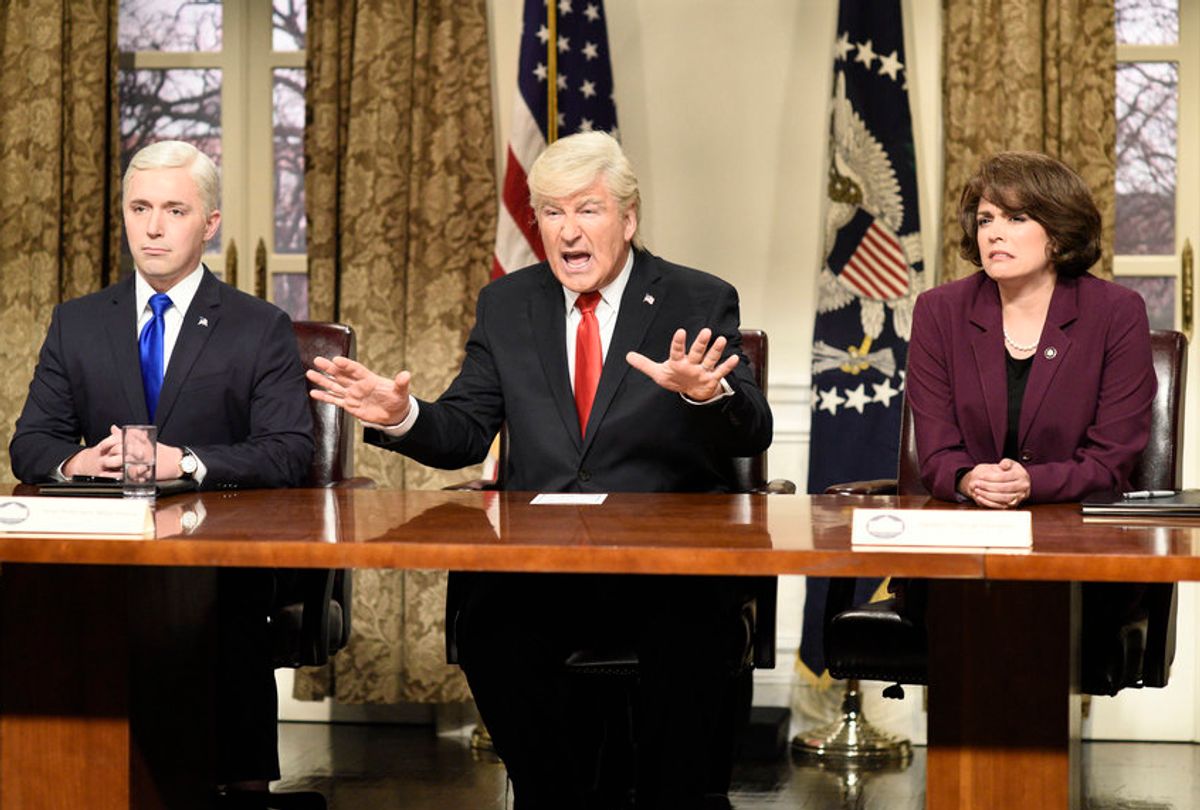 The feud between President Donald Trump and his impersonator Alec Baldwin lives to see another day, and it's likely that there are more ahead.

"Saturday Night Live" returned this weekend and featured Baldwin as Trump in a bipartisan symposium about gun control in the show's cold open. The skit poked fun at the president's meeting with lawmakers on Thursday and his ever-changing opinions on gun control that left many conservatives alarmed.

"Tonight I am here to bring you a message of healing and a show of unity," Baldwin's faux Trump said to kickoff the meeting as he glanced at his notecard. "I hear you and I care."

He added, "It's clear something has to change."

"I said I was going to run this country like a business," Baldwin's Trump continued. "That business is a Waffle House at 2 a.m. — crazies everywhere, staff walking out in the middle of their shift, managers taking money out of the cash register to pay off the Russian mob."

"We have to hard look at mental health, which I have so much of, I have one of the healthiest mentals," Trump said. "My mentals are so high, but we have to respect the law believe me no one loves the Second Amendment and due process more than me."

Baldwin's Trump continued, "But maybe we just take everyone's guns away. Nobody is allowed to have a gun — not even whites."

The sketch went on to poke fun at the number of Trump administration officials who have either left the White House, or were otherwise ousted. In recent days it has been reported that, H.R. McMaster, Trump's national security adviser, would be replaced in the coming weeks. That news came as White House communications director Hope Hicks announced she would soon resign.

"If I have to make America's schools safe all by myself I will, just like how I'm running the White House all by myself," the faux Trump said. "Because these people who work for me keep resigning. Hope Hicks, she's like a daughter to me."

He continued, "So smart, so hot. You know, I hate seeing her go but I love watching her walk away. I mean Jared Kushner is basically the hottest chick left in the place, and he's probably going to jail soon so he's out."

Baldwin's Trump looked for reassurance and asked McMaster if he still planned on staying with his administration. The camera then cut to an empty chair with his name placard on the desk. "He'll always stand by my side, great guy," he said.

The skit comes after Trump has engaged in an ongoing feud with Baldwin. It started last week when Baldwin said playing Trump on "SNL" was agonizing. An evidently infuriated Trump fired back in an early morning tweet on Friday morning in which he called Baldwin's impersonation of him "terrible."

Trump has not yet tweeted about Saturday night's "SNL" skit, but he's likely to take advantage of his "executive time" sometime soon.