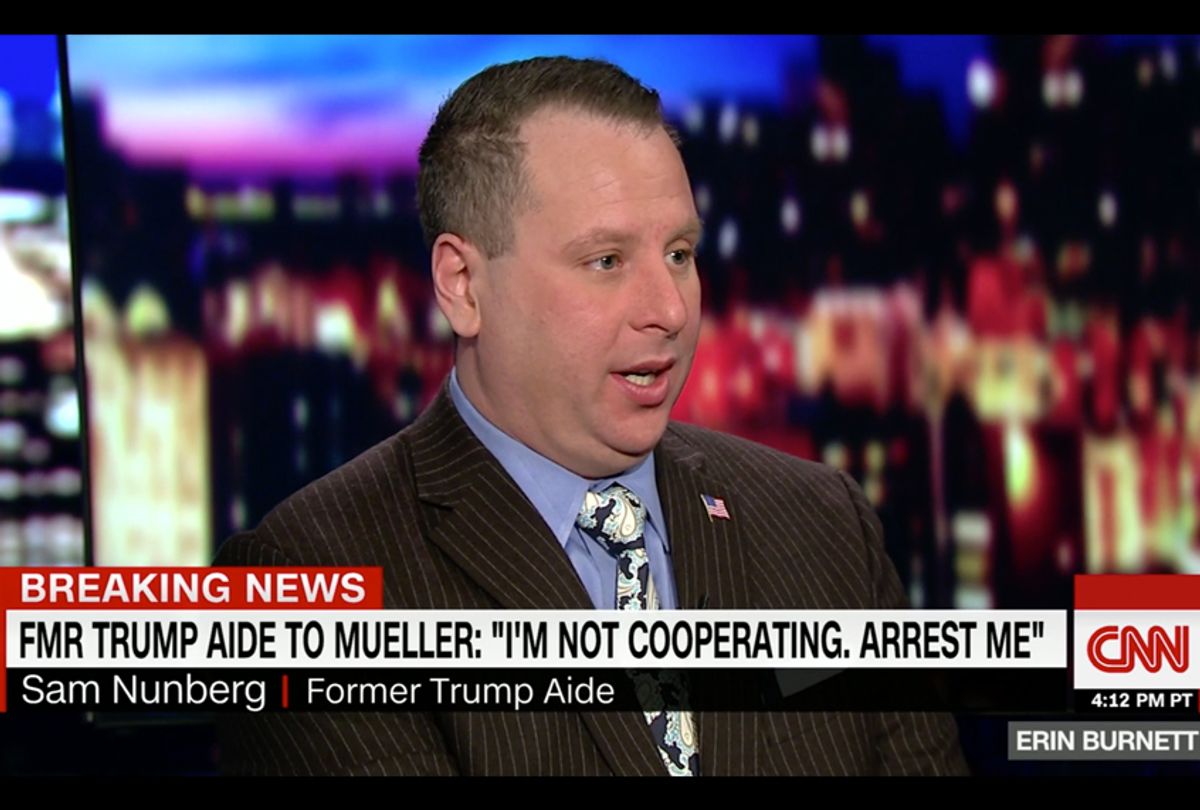 In multiple media interviews throughout the course of Monday, a volatile and belligerent former Trump aide expressed incredulity at the subpoena he had received from Special Counsel Robert Mueller as part of Mueller’s investigation into possible collusion between the Trump campaign and foreign agents. The aide in question, Sam Nunberg, worked for Trump’s campaign as a communications advisor from February 2015 to August 2015 and was fired after his old racist Facebook posts were uncovered by journalists.

First, speaking with Katy Tur on MSNBC, Nunberg defended his decision not to comply with Mueller's subpoena and reiterated that he would not cooperate.

“I’m not a fan of Donald Trump,” Nunberg said on MSNBC, and later, CNN too. “He treated Roger [Stone] and me very badly and screwed us over during the campaign. But when I get a subpoena like this — the president's right. It’s a witch hunt. I’m not going to cooperate.”

“What [sic] does Bob Mueller need to see my emails?” he said to Katy Tur on MSNBC.

“I’m not going to spend 80 hours [going over my emails] because a bunch of U.S. attorneys… want to harass me,” Nunberg told Tur.

“Are you willing to go to jail for this?” Tapper asked Nunberg.

“I’m not cooperating, if you want to arrest me, arrest me,” Nunberg said to Tapper. “It’s a witch hunt.”

As Tur explained to Nunberg, he could be held in contempt of court or arrested — Nunberg said he thought that such a scenario would be “funny.”

Nunberg did at least six interviews on Monday on multiple TV news channels, and he was a trending topic on Twitter all day as users debated his bizarre behavior.

Many speculated that Nunberg was drunk or on drugs. When Nunberg appeared live on Erin Burnett’s CNN segment, Burnett noted that she smelled alcohol on his breath. He denied drinking, mentioned being on antidepressants, and changed the topic.