The 90th Oscars: Kimmel succeeds by not trying too hard

When you know there's a problem right outside the door, the best thing to do is not call attention to yourself 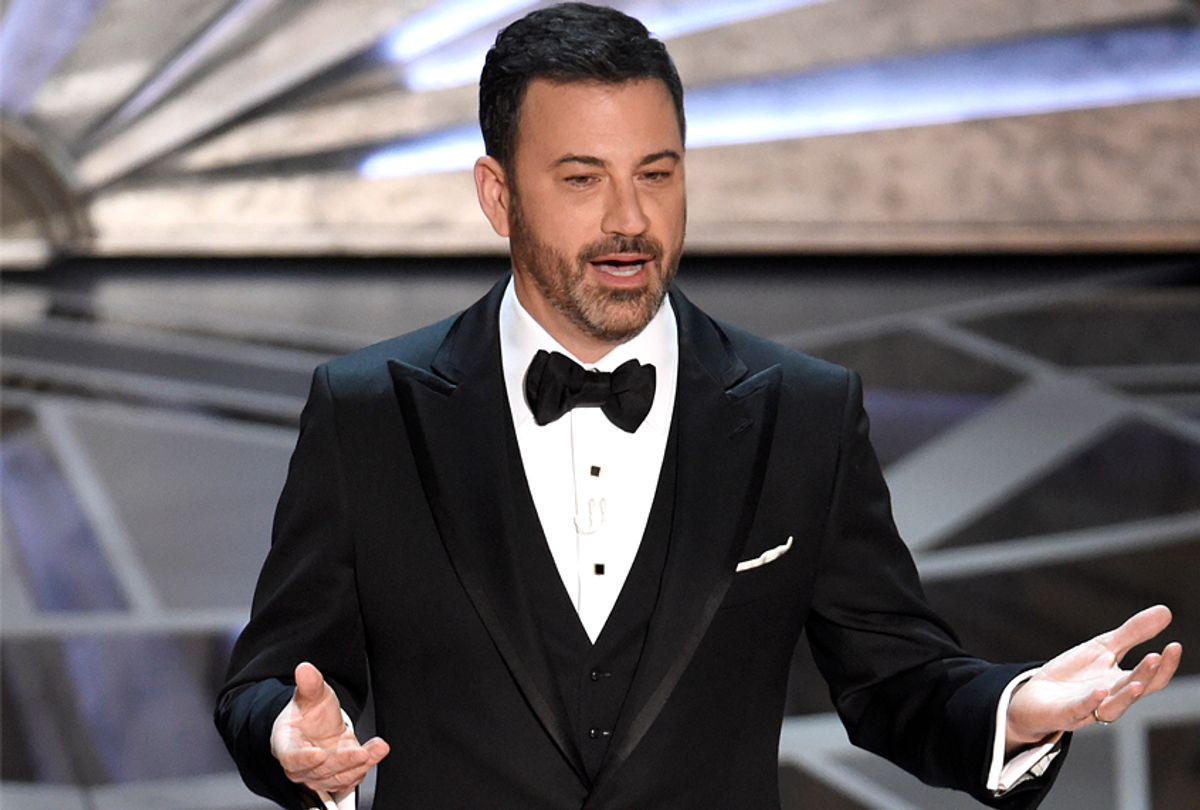 Host Jimmy Kimmel speaks at the Oscars on Sunday, March 4, 2018, at the Dolby Theatre in Los Angeles. (Photo by Chris Pizzello/Invision/AP) (Chris Pizzello/invision/ap)
--

So, what does one do when hosting an Academy Awards telecast that’s notable for many reasons other than its landing on a round anniversary? What’s the best course of action when the last time the audience saw you, you were smoothing over an historic goof-up in which the wrong movie was announced as the Oscar winner for best picture?

What’s the right play when you’re presiding over an awards show months into a movement that erupted out of the long overdue take-down of one of Hollywood’s most powerful sexual abusers? When you’re entertaining a room in which half the people are all in for #TimesUp, and a significant portion of the other half likely fears being outed next?

If you’re Jimmy Kimmel, host of the 90th Oscars, you do your best to hit every beat without offending too many people in the seats or watching at home. You toss in the obligatory joke about the greatness of Meryl Streep; make heartfelt statements about the need for equality; leaven your acknowledgement of the great sorrows of the moment with a zinger or two about Donald Trump’s idiocy.

You refer to the weight and import of women’s struggles with a joke that is literally standing beside you. “Oscar is the most beloved and respected man in Hollywood. And there's a very good reason why,” Kimmel said, strolling over to the giant prop version of the award statue situated stage right. “Just look at him: he keeps his hands where you can see them, never says a rude word, and more importantly, [has] no penis at all. He is literally a statue of limitations.”

You make a joke about Harvey Weinstein that isn’t at the expense of his scores of victims, instead opting to point out that the only other person kicked out of the Academy of Motion Picture Arts and Sciences was a character actor named Carmine Caridi, ousted for sharing screeners. Caridi, Kimmel joked, “got the same punishment as Harvey Weinstein for giving his neighbor a copy of ‘Seabiscuit’ on VHS.”

This was more or less the extent of Kimmel’s mention of the monster. But Weinstein’s name needn’t have been mentioned that much. Seeing his accusers Ashley Judd and Salma Hayek take the stage with sister survivor Annabella Sciorra, to present a video montage celebrating inclusion, was adequate enough to remind us of his crimes. Seeing Sciorra at the Oscars after such a long absence was especially touching.

Appropriately, Weinstein’s absence was felt less keenly on Sunday's Oscars broadcast than the industry’s conscious emphasis on the ways that Hollywood is the land of erasing borders. From this time onward, that is. This Oscars ceremony is still rewarding works that were years in the making — remnants of business as usual.

Jordan Peele took home the best writing for an original screenplay for “Get Out,” making history as the first black writer to achieve that honor. Frances McDormand won best actress for her performance in “Three Billboards Outside Ebbing, Missouri," with her co-star Sam Rockwell taking home the Oscar for best supporting actor.  The Oscar for best foreign picture went to Chile’s “A Fantastic Woman,” starring transgender actor Daniela Vega.

And yet, on a night deeply colored by #MeToo, we also witnessed the result of Kobe Bryant’s image rehabilitation; he has an Oscar now for his animated short, "Dear Basketball." We celebrated the best animated feature win for “Coco,” a beautiful story about Latinx immigrants and families brought to us in part by John Lasseter. Gary Oldman won best actor for his portrayal of Winston Churchill in “Darkest Hour,” ending his long speech by thanking his mother and saying, “Put the kettle on, I’m bringing Oscar home.” That’s sweet. Oldman’s ex-wife recently re-surfaced domestic abuse allegations which he insists are false. Oh yeah, and then there was that time he defended Mel Gibson’s racist comments in a Playboy interview.

Kimmel is as attuned to Hollywood’s political atmosphere as he is to the horror show in Washington. Understandably, he acknowledged the cultural hot coals angrily smoking around Oscar's edges without seeming mean-spirited, plying the audience with a humorous style that was pleasant and smart, deadpan without being sleepy.

Despite taking criticism for his tour bus stunt last year, he doubled down this time by taking a group of stars, including Mark Hamill and Gal Gadot, over to a screening to hand out snacks to unsuspecting moviegoers. Some will see that as unnecessary pandering; I found watching "Call Me By Your Name" star Armie Hammer fire meaty munitions from a hot dog cannon into a crowd to be delectable on so many levels.

Whether Kimmel’s soft touch was the right call or a dud depends on what a person expected from him. Given the emotionally draining year that passed between last year’s outing and this one, some may have expected more bite as opposed to the simple positivity Kimmel aimed to foster as the evening started. Besides, he’s not generally one for making waves when he doesn’t have to.

“By the way, for those who say we’re a bunch of out-of-touch Hollywood elites,” he said at one point, “I’ll have you know that each of the 45 million Swarovski crystals on the stage tonight represents humility.”

By now Kimmel knows that being the host everyone talks about Monday morning is not the goal. That dubious honor belongs to TV personality Ryan Seacrest, who decided to show up for red carpet duty not even a week following a Variety exclusive featuring the account of a former stylist accusing him of sexual harassment. Seacrest responded to Variety’s story by penning a rebuttal denying the allegations in The Hollywood Reporter.

E! backs Seacrest, as does his “Live with Kelly and Ryan” co-host Kelly Ripa. The cable network steamed ahead with its plan to put him on the red carpet, in a move that one would most accurately describe as ballsy. If that doubled as a test to see whether Seacrest’s charm defensive worked, E! may have a few things to contemplate.

On the biggest red carpet night of the year, the institution's erstwhile king was snubbed by every best actress nominee. Nicole Kidman and Sandra Bullock headed straight over to chat with ABC’s team. Jane Fonda and Helen Mirren set fire to the red carpet and iced out E!’s team. Gadot, Lupita Nyong’o and Danai Gurira flew right on by Seacrest. He did manage to land an interview with the woman who went on to win the Oscar for best supporting actress, Allison Janney. But that was his night’s biggest get.

Besides Janney, Seacrest got time with his co-worker Ripa and her husband Mark Consuelos,  as well as "The View" co-host Whoopi, who likely stepped up to keep work from getting more awkward. Disney star Sofia Carson stopped by, as well as Seacrest’s friend Diane Warren. “Get Out” co-stars Bradley Whitford, Lil Rel Howery and Betty Gabriel stopped by; the film’s main star and best actor nominee Daniel Kaluuya and Peele did not. Rita Moreno also dropped in, and she turned heads by wearing the same dress she wore to the Oscars in 1962, when she took home an award for her work on “West Side Story.”

Had this been a normal Oscars red carpet for Seacrest, Moreno might have gotten some mic time. Gabriel, on the other hand, would have received remarks from E!’s fashion team, headed by Giuliana Rancic — this time, they were posted at a nearby hotel — while Seacrest passed her over to chat up A-listers. You can’t blame an up-and-comer for stepping in when an opportunity presents itself.

The same can be said of the other women who stopped to talk to Seacrest, actually — all of whom, like Gabriel, happened to be people of color: Eiza González, Mary J. Blige, Andra Day, Tiffany Haddish and Taraji P. Henson played the game. Their visits seemed to be more of a matter of politics than choice; if Seacrest survives this moment, which may likely happen, their agents can now remind him of who stepped in to justify his on-camera existence when the Margot Robbies of the world shined him on.

If that wasn’t the case, the savvy Henson would not have slipped in this bit of shade: “You know what? The universe has a way of taking care of the good people.” She looked Seacrest dead in the eye, chucked him under his chin and smiled a little too brightly. “You know what I mean?”

It may indeed be “a new day in Hollywood,” as Jennifer Lawrence declared before presenting this year’s Oscar for best actress to Frances McDormand for her work in “Three Billboards Outside Ebbing Missouri.” But E!’s obstinate refusal to rethink its red carpet strategy is proof that a substantial amount of machinery still needs to be dismantled, or at the very least retrofitted. Lawrence and Jodie Foster stepped in to replace last year’s best actor winner Casey Affleck, who would have presented the award per Academy Award tradition. Affleck had the good sense to bench himself given his role in, as E! personality Josh Horowitz called it earlier that day, “an awkward situation.”

How telling it is that an E! representative would have referred to harassment allegations by two women as “an awkward situation.”

Once again, Kimmel managed to win simply by not losing. He promised a jet ski to the winner with the shortest speech; that honor went to "Phantom Thread" costume designer Mark Bridges. Viewers who expected social issues to play a role in the event were rewarded by a performance by Common and Andra Day for their Oscar-nominated song “Stand Up for Something," featuring 10 activists standing behind them, including Planned Parenthood's outgoing president Cecile Richards, Janet Mock, Sandy Hook Promise founder Nicole Hockley, Black Lives Matter co-founder Patrisse Cullors and #MeToo originator Tarana Burke.

Faye Dunaway and Warren Beatty announced the correct best picture winner this time. Haddish tore through the photo line, danced with everybody and actively courted Streep to play her mother in an upcoming movie. All that happened, and Kimmel still landed the plane without too much fuss or alarm. As such, choosing to exorcise the apprehension in the air without a surfeit of force actually worked.

“What happened with Harvey, and what's happening all over, was long overdue,” Kimmel stated in a moment of seriousness. “We can't let bad behavior slide anymore. The world is watching us. We need to set an example.”

Not content to wait for tomorrow, when McDormand won she asked all the female nominees in attendance to stand up and be seen, then called on producers to fund more projects from women. “I have two words to leave you with tonight, ladies and gentlemen: inclusion rider,” she said, taking full advantage of her platform to encourage her colleagues to use their pull to bring more racial and gender diversity to productions. The night belonged to women like her. Everyone else, hosts included, could either ride in their wake or be left standing on the sidelines to wait for the universe to take care of things.