With Robert Mueller at his back, Erik Prince denies he tried to help set up a secret Russia back channel for Trump 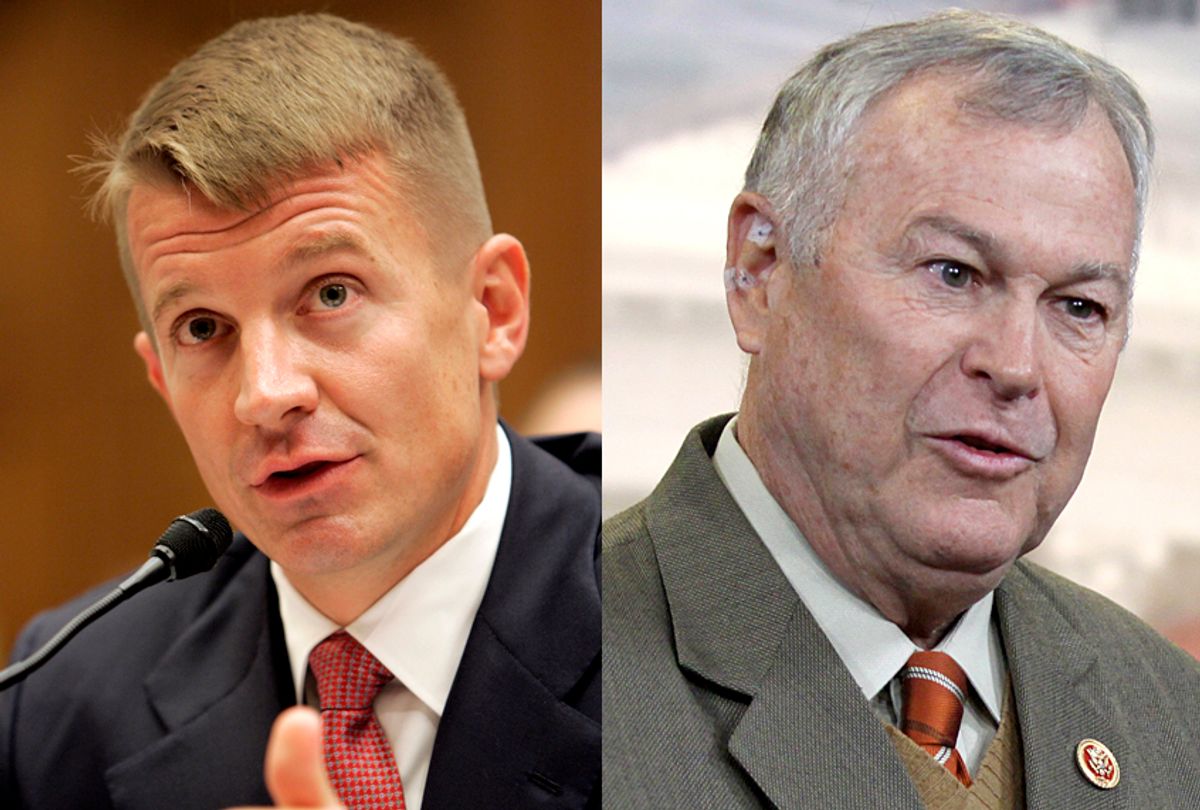 Despite facing renewed scrutiny over his clandestine meeting in the remote Seychelles islands shortly before Donald Trump's inauguration, the founder of the private mercenary firm Blackwater, Erik Prince, is certainly not maintaining a low profile.

The Washington Post, citing unnamed sources, reported on Wednesday that Special Counsel Robert Mueller “has gathered evidence that a secret meeting in Seychelles just before the inauguration of Donald Trump was an effort to establish a back channel between the incoming administration and the Kremlin.”

Prince, a major Republican donor and the brother of Trump's Education Secretary Betsy DeVos, is reported to have met with a Russian sovereign wealth fund manager who is said to have close ties to the Kremlin. Prince later told the House Intelligence Committee that his meeting with Kirill Dmitriev was brief, unplanned and had nothing to do with U.S.-Russia relations.

"We chatted on topics ranging from oil and commodity prices to how much his country wished for resumption of normal trade relations," Prince told the House Intelligence Committee in November. Describing his 30-minute chat with Dmitriev at a Four Seasons bar, Prince told lawmakers, "I remember telling him that if Franklin Roosevelt could work with Joseph Stalin to defeat Nazi fascism, then certainly Donald Trump could work with Vladimir Putin to defeat Islamic fascism."

The New York Times also reported this week that Dmitriev met with Anthony Scaramucci, who would later become White House communications director, at the World Economic Forum in Davos, Switzerland, the same month as the Seychelles meeting.

In his sworn testimony, Prince insisted that he was not representing the Trump transition team in Seychelles.

However, the Post reported that Mueller has reason to believe that Prince's testimony omitted a few crucial details.

"A witness cooperating with Mueller has told investigators the meeting was set up in advance so that a representative of the Trump transition could meet with an emissary from Moscow to discuss future relations between the countries," the paper reported.

That cooperating witness, George Nader, is a Lebanese-American businessman who frequented the White House in early 2017 and previously consulted for Prince's Blackwater. Nader, who reportedly organized and also attended the Seychelles meeting, is a close adviser to the United Arab Emirates Crown Prince Mohammed bin Zayed Al-Nahyan, the Times reported.

“Never has so much been made about so little,” Prince told Fox News after the news of Nader's cooperation with Mueller broke.

“This is a circular firing-squad argument,” he insisted. ”If the left’s fantasy of collusion is true, why does a meeting two months after election matter at all.”

According to The Post, Mueller has reason to believe that the Emirati officials were under the impression that Prince was representing Trump at the meeting. Perhaps most notably, the meeting took place just weeks after Jared Kushner reportedly told the Russians that he wanted to set up a back channel through which they could communicate.

But Republicans on the House Intelligence Committee remained unfazed by the new reporting.

The committee's top Democrat, Rep. Adam Schiff, D-Calif., suggested that Democrats can certainly bring it to the attention of the special counsel on our own," if Republicans remain uninterested in investigating the reported discrepancies in Prince's testimony.

Prince, who has mulled a potential Senate run in Wyoming this year, is also set to hold a fundraiser next month for Rep. Dana Rohrabacher, R-Calif., who is known for his robust support of Putin.

Prince used to work for the congressman as an intern on Capitol Hill in 1990, CNN noted. Amid the Russia investigation, the congressman, who has served for decades, is faced with a difficult reelection. His long-held ties to Kremlin-linked officials and policies viewed by critics as pro-Russia have made him a top target for Democrats.

The event is scheduled to take place on March 18 at Prince's home in Middleburg, Virginia. Others expected to attend include Virginia Republican Reps. Tom Garrett Jr. and Dave Brat, as well as Lt. Colonel Oliver North. "Tickets start at $1,000 for the general reception, although donors paying $2,700 will also be invited to attend a VIP event beforehand," according to CNN.

It's important to note that North, along with are the primary subjects of a story that was reported in December of last year that detailed plans for Prince to help establish a global spy apparatus that would circumvent the Central Intelligence Agency. The idea was that Trump would be able to use this secret intelligence service to counter his enemies within the so-called "deep state."