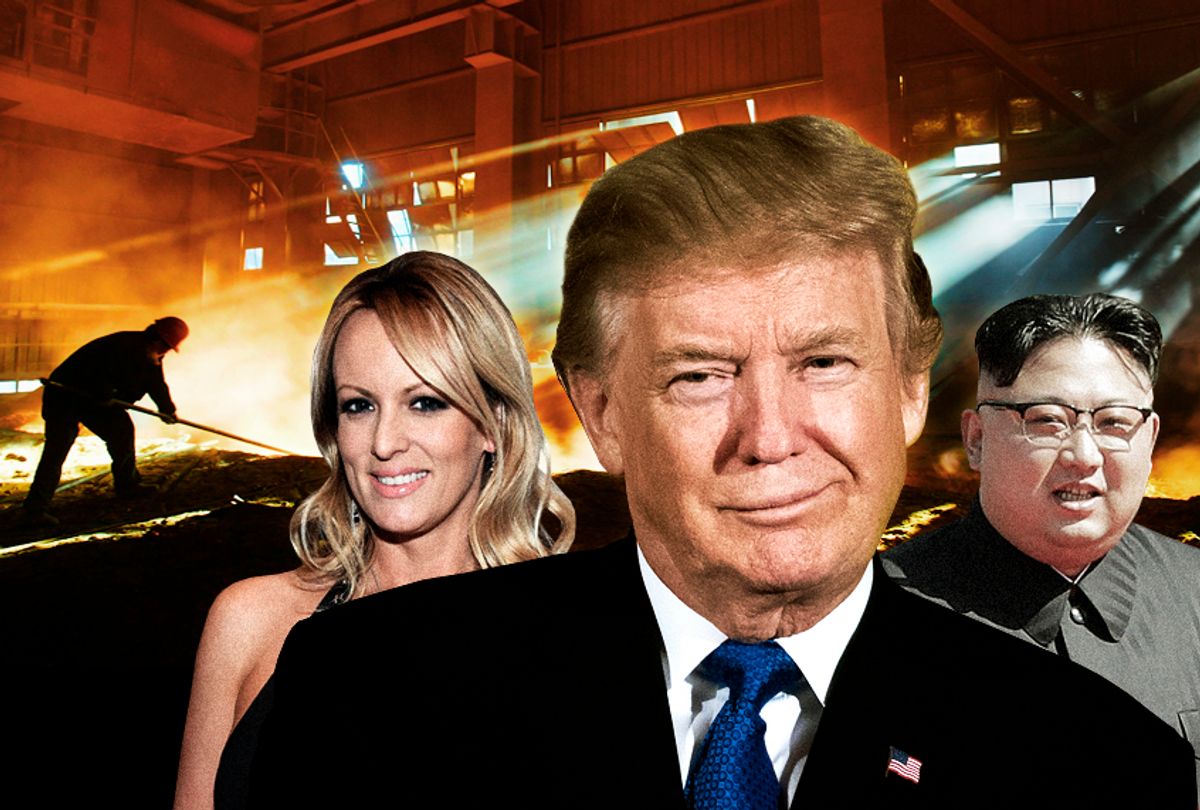 If Donald Trump had been sent to Earth by a malicious deity to expose human hypocrisy in its many forms, like a trickster demon out of the mythological past, I’m not sure he could be doing a better job. Indeed, that might be a more convincing explanation than any others we have available, and it conforms neatly with Neil deGrasse Tyson’s 50/50 proposition that our universe is actually a computer simulation designed by a superior civilization.

This week alone we have seen Trump reintroduce tariffs — a seemingly antique mechanism viewed with dread by both economists and history students — halfway admit to having cheated on his current wife with a porn star, and agree in principle to a summit meeting with North Korean leader Kim Jong Un. None of those things would have seemed conceivable under any other president, let alone all of them happening at the same time. But the weirdness actually goes deeper than that: Those actions taken individually are puzzling and difficult to evaluate, except insofar as they defy conventional wisdom, which seems to be Trump’s guiding principle. Taken together, they do not remotely add up to a coherent picture of this person or his presidency.

Over the past year or so I’ve frequently used this space to grasp for larger strands of meaning in the Trump presidency, which can often feel like a doomed or quixotic task. Trump is waging a war against reality or a war against meaning; or he is a leading figure in the Western world's war against itself. Whatevs! None of us will live long enough to fully understand this historical moment in America, and even to frame the question that way assumes a rational and orderly universe that can be understood, something that can no longer be taken for granted. Do events have consequences? Does history proceed from causes to effects? Trump himself might pronounce such airy-fairy notions to be “FAKE NEWS!”

One of my operating assumptions all along has been that none of the most obvious explanations for the Trump phenomenon was entirely adequate. Nearly everyone in the political and media classes, including leading Republicans and many members of his own administration, would agree that Trump is an incompetent buffoon who was elected president by accident or by default. OK, sure. But that leaves too many big questions unasked and unanswered: How do we explain the howling vacuum at the center of American politics that made such a result possible in the first place, or the Democratic Party’s apparently unlimited capacity for self-sabotage despite its supposed ideological and demographic advantages?

As for the counter-argument that Trump is a genius-level showman — a pro wrestling “heel,” as Salon’s Chauncey DeVega has suggested — who understood before the rest of us that the distance between politics and pop culture had entirely collapsed, I think that’s an important insight. It’s also fully compatible with the first explanation given above: To Trump and his followers, it simply doesn’t matter that he manages through chaos, possesses no core ideology or clear policy positions (beyond general misanthropy, bigotry and small-mindedness), and constantly lies about everything to everyone. If they believe that politics is nothing more than mendacious and sadistic gamesmanship -- not entirely without justification -- at least their guy is a grandmaster.

Both of these theories about the Trump moment simultaneously explain too much and too little. Both are focused on “what just happened,” and barely try to reckon with the historical currents that got us here. If there are Democrats who tell themselves that the purported “blue wave” in November, followed by the election of KamalaKirstenWhoever in 2020, will rapidly return the nation to some state of Hillary-flavored normalcy, I think they are uncomfortably aware, in the depth of the night, that it’s all a delusion. Exactly the same goes for those Republicans who tell themselves that, hey, they’re getting a lot of what they wanted, and after this little dalliance with the neo-Nazi crack pipe their party can slide right back into polite country-club racism and “entitlement reform.”

It's not quite fair, as Trump reminded us this week, to characterize his actions as empty, meaningless showboating, just because they cannot be reduced to a single predictable pattern. Others have used the word “demonic” to describe him, and I almost want to take that metaphor back to a literal or medieval understanding of the term. He sometimes seems like a mocking agent of fate who walks among us in human form, showing us example of our most egregious weaknesses.

There is nothing on God’s green earth less interesting than tariffs. My mother once told me that the Smoot-Hawley Tariff, a protectionist measure enacted in 1930 and widely blamed for exacerbating the Great Depression, drove her away from studying American history in college. But Trump has made tariffs sexy again, if only briefly. By decreeing new duties on imported steel and aluminum, in defiance of most major economists and all bipartisan trade policy of the last 40 to 50 years, he has reminded us that American elites across the political spectrum collaborated in outsourcing the nation’s industrial base and disempowering the working class.

It doesn’t follow that Trump’s knee-jerk solution is likely to fix the problem, which is global in nature and enormous in scale. Maybe he’s gesturing back toward Steve Bannon’s nostalgic “economic nationalism” — better known in the original German as “national socialism” — or just trying to score points with downscale white supporters in heartland states. But at one stroke he has efficiently exposed the compromised situation of both political parties. Republicans who have tolerated every noxious Trump policy and every racist Trump statement suddenly find a spine when it comes to a minor and likely symbolic trade war; Democrats who long ago abandoned any allegiance to the labor movement and the working class either have to oppose those forces and stand with big capital or embrace the policy of a president their voters despise.

There’s almost no mystery around the Stormy Daniels affair at this point, except for the unanswered question of why Trump still seems eager to deny the liaison and shut her up. (Salon’s Heather Digby Parton speculates that he fears a painful future divorce settlement with Melania.) But as he edges closer to admitting to conduct that his supporters plainly don’t care about, or see as further proof of his alpha-male awesomeness (and for which the religious right has already offered him a “mulligan”), the most toxic male in American public life also exposes the widespread sexual hypocrisy of politics.

For generations we ignored the sexual escapades of presidents entirely (as with FDR and JFK) or viewed them as amusing personal quirks. That of course refers to Bill Clinton, whose presidency looks worse and worse as it recedes in the rear-view mirror, and for whom Donald Trump serves as diabolical reflection or karmic payback. I’m not suggesting that the two men are morally equivalent, but when Republicans note that liberals didn’t mind having an accused sexual predator in the White House when it served their purposes — and indeed avidly defended him from his persecutors — we must admit they have a point.

What can we even say about the parody production of “Nixon in China” that Trump apparently intends to stage in Pyongyang, starring himself and Kim Jong Un? Very little, except that like almost everything he does it presents a baffling combination of boldness and cluelessness that almost adds up to brilliance. Foreign policy “experts” and Korea hawks, including most of the president’s closest military advisers, are universally horrified by this proposal — which can only be scored as a point in its favor. How dare the president personally intervene to head off a war that has been so lovingly prepared, and in which the foreign policy elite has invested so much intellectual capital?

OK, OK -- even the hawks will reluctantly concede that diplomacy is a better option in the Korea crisis than nuclear war, but what they generally mean by that is some arduous process of mid-level arm-twisting that ratchets down the tension a little but keeps the military-industrial complex in play. For any president to plunge headlong into direct negotiations with a volatile foreign adversary is almost without precedent; for one so spectacularly unprepared and uninformed to do so is closer to a Marvel Comics plot twist than to real life.

Does that mean it’s a bad thing? I honestly have no idea; I’m not even sure that’s the right question. Every president since George H.W. Bush has gone in circles with the North Korean regime, from saber-rattling to diplomacy and back again, without altering that nation’s isolation or doing anything to halt its nuclear weapons program. Trump and Kim’s proposed summit of global pariahs has at least broken through that tiresome cycle, even if it’s no more likely to bring peace in our time than Trump’s steel tariffs are likely to bring back middle-class factory jobs to western Pennsylvania.

It’s not “normalizing” Donald Trump to observe that his unexpected maneuvers this week have once again made his enemies look befuddled and weak. There is nothing normal about Trump, a damaged and impulsive personality whose brief presidency has been an uninterrupted spectacle of corruption and cruelty. But he has shown us things about the dysfunctional character of American politics that we needed to see. Those in the Ivy-to-Beltway commentariat who protest that Trump’s half-baked ideas about trade or foreign policy are dangerous because they defy conventional wisdom are deliberately evading the one clear lesson of the murky Trump era: There is no conventional wisdom anymore, geniuses, and that guy in the White House is living proof.