"Hap and Leonard: The Two-Bear Mambo": A dance with racial toxicity 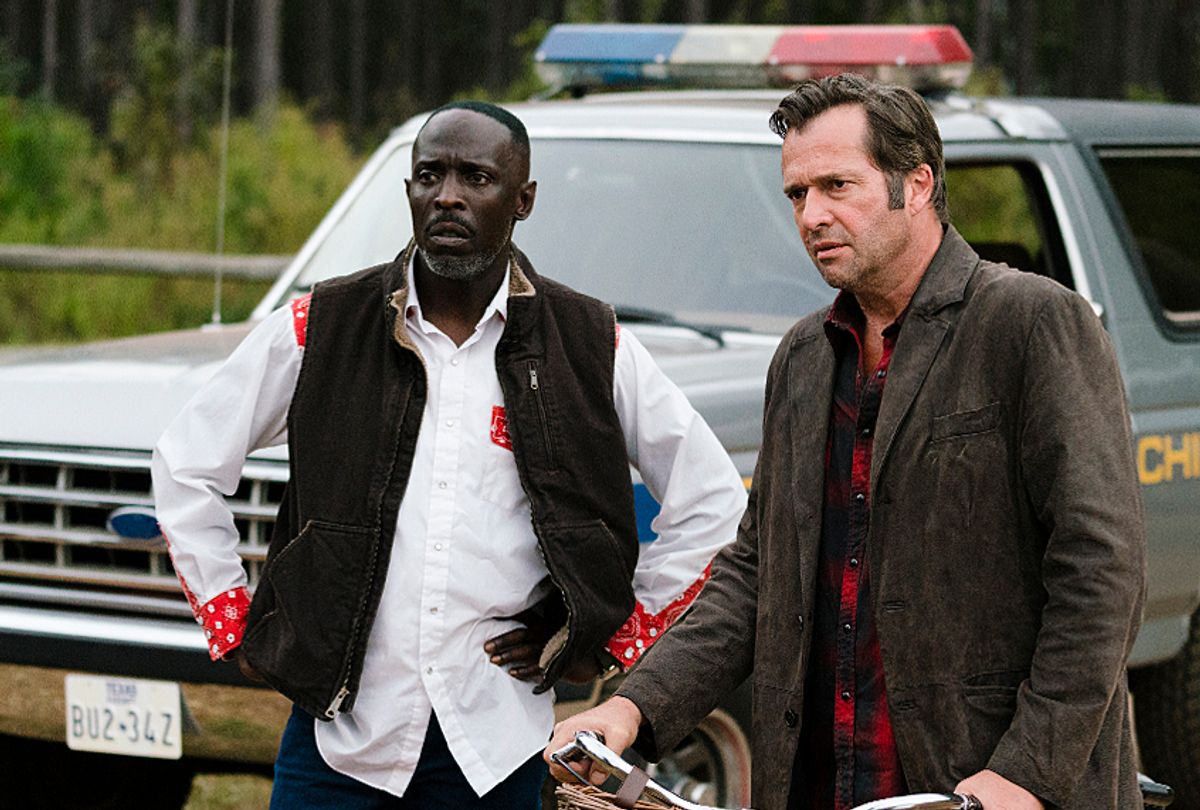 Nightmares play a prominent role in “Hap and Leonard: The Two-Bear Mambo,” the worst originating from the anxiety-ridden subconscious of Hap Collins (James Purefoy). This is not surprising, given Hap’s heretofore irrepressible idealism and his propensity to unleash his mind to wander down the various paths of “what if.”

But in the SundanceTV drama’s latest season, airing Wednesdays at 10 p.m., Hap’s bad dreams infect his common sense to the point of jeopardizing the life and safety of his best friend Leonard Pine (Michael Kenneth Williams). Again. And it’s all over a woman Hap’s hopelessly in love with who doesn’t love him back . . . again.

“Hap and Leonard” viewers are well-acquainted with the pair’s dynamic now that we’re three seasons in. Hap’s sweet, determined and a touch simple; Leonard is ornery, pragmatic and tart-tongued. He’s the brains of the outfit while Hap is the heart. They need and love each other in a way many in their orbit cannot wrap their heads around. All they see is a straight white guy and a gay black man hanging out together and attracting trouble they don’t need.

A procedural familiarity fuels each season’s mystery, all based on Joe R. Lansdale’s novels. But the remarkable difference with “Hap and Leonard” is its willingness to consistently place its heroes in direct conflict with a sinister, pervasive and brazen enemy poisoning their world and ours.

It may be the only scripted series on television right now that portrays racism boldly and without qualification. This also is the most likely reason that its audience size remains relatively modest in comparison to most cable series, even if it’s SundanceTV’s highest-rated original. “Hap and Leonard” is consciously atmospheric, crisply paced high-noon noir, and Purefoy and Williams have an onscreen presence that’s tough to top.

But its stories wade into territory Americans still would rather refrain from confronting, and its status as a period piece only sharpens the discomfort of knowing that bigotry is still as alive now as it was in the late ‘80s, when Hap and Leonard’s adventures take place.

With each new round of episodes, showrunner John Wirth and his fellow executive producers and writers display our fractured race relations more plainly. In its first season we could take comfort in the notion that the epithet-spewing antagonists were psychotic outsiders. Season 2 moved it closer to center stage, as Hap and Leonard contended with the racism of a local justice system rigged by a corrupt judge and local sheriff content to allow a plague of disappeared black boys to go unchecked.

In these six new episodes pit the duo against the Ku Klux Klan, a hate group that only a couple of years ago naively was presumed to be a relic of the pre-Civil Rights era. Reports indicate that they're openly recruiting again, and shortly after Donald Trump was elected president, we came close to getting an unscripted series about the KKK. This season of "Hap and Leonard" takes place in a version of a 1989 that feels very much like the present, and this is a coincidence. . . to a degree.

The Klan is the dominant power in the deceptively named Grovetown, a place described by one character as a two-hour ride from Hap and Leonard's East Texas home base “but 100 years away.” Their friend and Hap’s object of unrequited affection Florida Grange (Tiffany Mack) went to the place to assist a client with a legal case and never returned. Not even the chief of police J. D. Cantuck (Corbin Bernsen) knows what happened to her, or so he claims.

Grovetown’s racist reputation is renowned enough that friends warn Hap to go it alone this time, which longtime viewers know is impossible. Depicting small towns as breeding grounds for evil is a go-to for TV series and movies, a fact the writers acknowledge by having the characters name-check “The Twilight Zone” as they drive into the center of town. “Two-Bear Mambo” takes place at Christmas time,  leading the heroes to observe straightaway how much the place resembles a Hallmark card, right down to its blinding whiteness. They also notice that everybody is staring at them, and not a one is smiling.

Any person of color that’s taken a road trip has likely experienced such a moment, and knows that the best course of action is to fill the tank and keep driving. Hap, however, presumes his whiteness will protect Leonard in Grovetown. It did before to a certain extent. The peril they face this time around is much more extreme.

“Hap and Leonard” has a knack for nodding in increasingly unsubtle ways to our society’s lack of evolution in matters of race and sexual orientation. The nature of this season’s conflict means that we spend less time witnessing Leonard’s tribulations as a gay man and much more about his crisis of confidence in America itself. One moment in an upcoming episode leads him to question whether his service in Vietnam, a life chapter in which he takes intense pride, means anything if he can’t safely walk down a street in his own country. Hap went to jail instead of going to Vietnam and draws a similar sense of esteem in his participation in the anti-war movement. The violence of this enemy tries those beliefs as well.

Being surrounded by such radical intolerance threatens to cleave a bond strengthened by a shared life of adversity. This isn’t merely true of the central duo: Grovetown symbolizes the dangerous hollowness of yearning for America’s mythical past. Nothing in the town appears to have progressed out of the mid-‘50s except for the model of standard-issue menacing pick-up truck driven by two homicidal locals. Well, that and the presence of a female officer (Laura Allen) who is up front about her view that black people aren’t human.

No part of these intense predicaments prevents these new “Hap and Leonard” episodes from maintaining heat, humor and sensual appeal, factors that make the difficult scenes easier to absorb. Then again, this has always been the secret of this show’s appeal: it showcases the lush grandeur of regional culture and draws upon local legend to inform each new mystery, while it makes hard observations about the diversity we’ve long taken for granted as Americans.

“Hap and Leonard” remains exceptional in the way that it illustrates the virulence of America’s racism, particularly in communities where whites and people of color exists almost shoulder to shoulder.  Grovetown’s grim history includes a blues legend, and that music still has a hold on the town even though the white folks take measures to make sure the black residents keep to themselves.

The local radio station’s DJ, Sonny Knox (Andrew Dice Clay), has to play more than his share of Burl Ives. Its white residents idolize Elvis — a typical tool of irony in tales like these, but easy to get — while the people on the black side of town have a stellar blues bar. Once again, Hap stands out as the only white patron. But, as always, he’s welcomed more or less — part of his status of being “black by association.”

“The Two-Bear Mambo” feels as agile as previous “Hap and Leonard” chapters, which is quite a feat considering how dire and urgent the plot is from its first moment, when we witness the aftermath of the pair’s harrowing, misbegotten mission before jumping backward in time to trace their path from the start. We see that the boys have taken a tremendous beating, are slumped over and barely speaking.

A fair share of the audience might see Leonard and Hap’s bloodied faces and bruises as an externalization of how our current harrowing moment has left us feeling on the inside. It really is our story. To paraphrase a line from an upcoming episode, we’re born Americans, and we’ll die Americans. What matters is the stuff that happens in between.