The daughter of GOP Sen. John McCain also says a recently-aired forum on guns "was a huge step backwards." 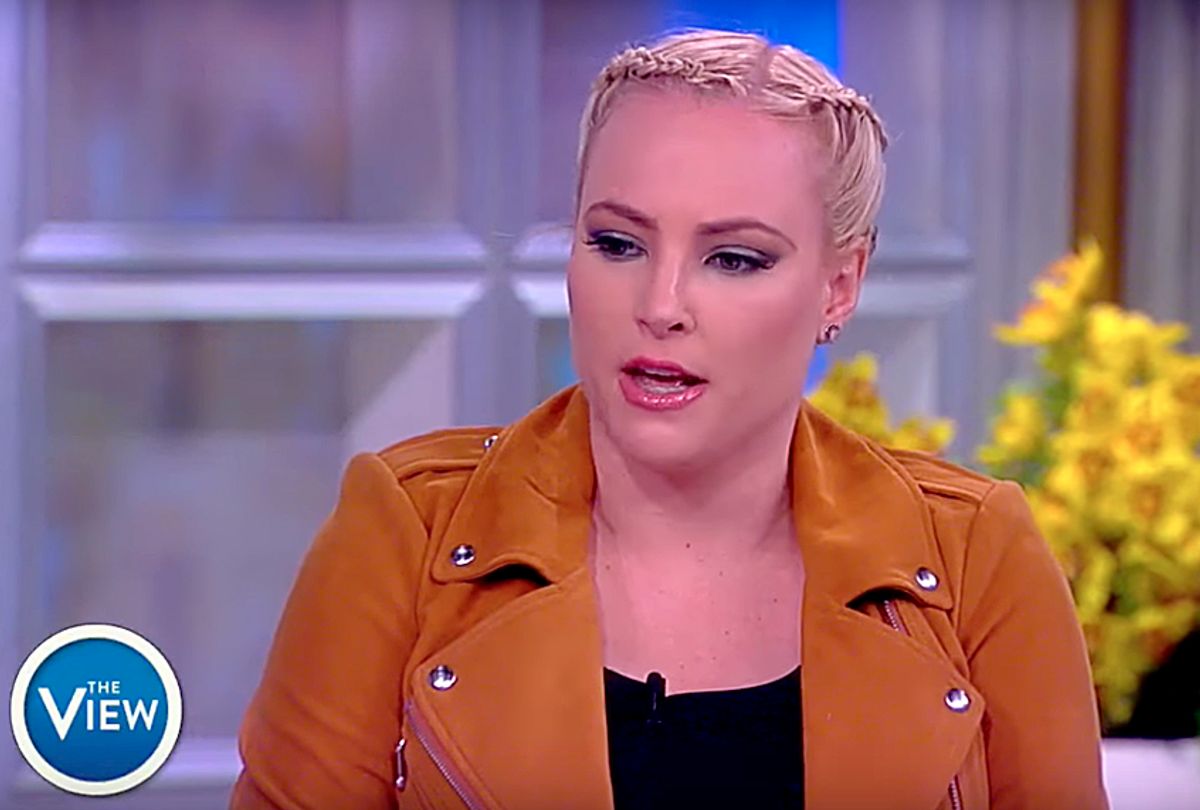 As students across the nation took to the streets Wednesday for 17 minutes — in memory of the victims of the shooting at Marjory Stoneman Douglas High School in Parkland, Fla. and to demand common-sense gun reform — Meghan McCain found a way to make the debate about herself.

During a hot-topic conversation about gun violence and teenage America's push for change, a majority of the women on "The View" were encouraging of a discussion on the Second Amendment, but McCain did not want to chime in since she supports the right to bear arms.

"Today is one of those days — I'm a big Second Amendment person, NRA member, proud NRA member — these are one of those moments that I don't think it's my turn to talk," she explained on the show, which she co-hosts.

The daughter of former Republican presidential candidate John McCain continued: "I think we can listen to kids right now. I've said what I've had to say at length. Everyone knows where I stand. I don't like the idea that somehow if you're a Second Amendment person, that you're for gun violence."

McCain's fellow co-hosts cut in to explain that today's nationwide demonstration, one month after the tragic mass shooting, is not in opposition of the Second Amendment or the NRA; it's a desperate, rallying cry for reform.

"No one is pointing fingers at the NRA. This is not about the NRA," co-host Whoopi Goldberg said. "These kids are saying, 'Listen, we just want you to know there's a lot of gun violence, and we want it to stop. And you're the adult, and we expect you to fix this.'"

Despite Goldberg's clarification, McCain steered the conversation back to herself. She then explained she's having a difficult time saying, "I think that it sometimes gets mixed up, that maybe you're less empathetic, you're less hurt, you're less somehow affected by school shootings in one way or another . . . And I felt it so much, especially being on this show, especially being the only person that I think comes from gun country."

Her co-hosts then cut in to tell McCain that her assumption was not accurate. Goldberg revealed that she has been a gun owner — and has talked about that fact for years. Even progressive commentator Joy Behar said that she once considered owning a handgun when she lived in the woods with her children.

Co-host Sara Haines explained that there is enough room in the discussion about gun safety for everyone — even gun owners — and that there are probably many students walking out today who gun rights' advocates. "This is more a general sense of, 'We haven't seen the needle move, even on things that we all agree on,'" she said.

But McCain pivoted back to the fact that gun reform was a challenging discussion for her. "I don't think right now it's a very interesting place for someone like me," she said. "The CNN town hall was a huge step backwards. I felt bad for the way it was handled. I thought it was really inappropriate, and I want to have more conversations that are civil."

"But that's not what this is," Goldberg interrupted. "Let's stick to what this particular march is about today. It's the students raising their voices and saying, 'We need your help.'"

The discussion delved into one about assault weapons, and Haines pointed out that a call for gun reform is often interpreted as a tyrannical declaration to void the Second Amendment and take away guns from people who pose a threat. "Even my own father . . . He said that the problem is they're going to take away the Second Amendment," she said.

"I think the kids are saying, 'We have an issue, and we want you to deal with it," Goldberg reiterated.

McCain said the idea of arming teachers is complicated and gets muddled in the discourse. She went on to disagree with co-host Sunny Hostin who wants military-style weapons, like the AR-15 — the rifle used in mass shootings in Parkland, Orlando, Las Vegas and Newtown — banned. McCain claimed she knew people who hunted with them.