The last generation of Toys "R" Us kids mourns its demise

The end of an era for toy store lovers 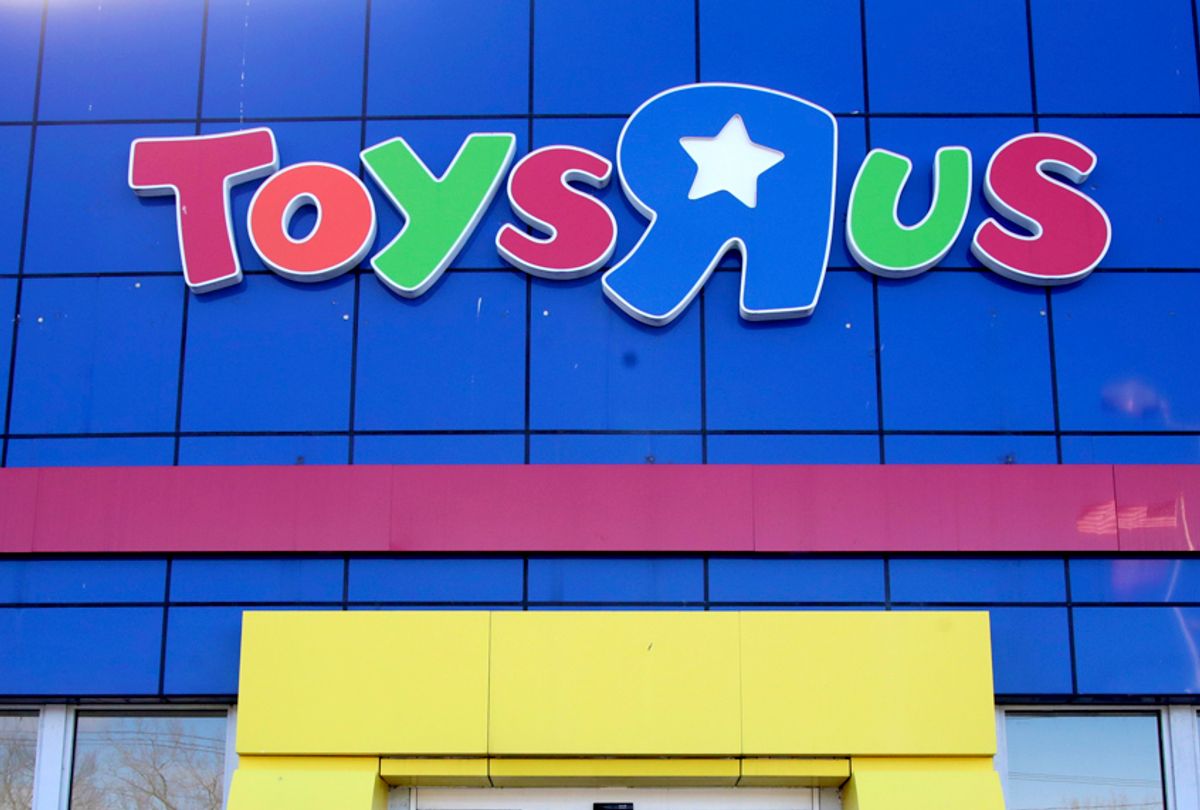 I am not a sentimental middle-aged person. I’m not nostalgic for AIDS jokes, institutionalized racism or any era in which knowing your assailant gave you an automatic downgrade to “date rape.” Make American great again? Are you effing kidding? But damn, I do feel sorry for the kids growing up today without toy stores.

The news on Thursday that Toys "R" Us is kaput smacked me in the heart in a place that even the demise of CBGB's couldn't. The company has announced it is shuttering or selling all of its 735 US stores, sending immediate shudders through the retail industry and a wave of sadness through generations of former Toys "R" Us kids.

If you are a below affluent person born in the last five or so decades, you probably have a Toys "R" Us memory. Geoffrey and company were certainly an undeniable presence in my own New Jersey childhood. The company, based in Wayne, was more than a store. It was, like Frank Sinatra and Bruce Springsteen and later, Tony Soprano and appalling MTV reality shows, a unique regional identity — earthy and more than a little bit in your face.

When I was a kid, it was the currently financially distressed FAO Schwarz, that Fifth Avenue bastion of elegant play (immortalized by Tom Hanks in "Big") that was the platonic aspirational ideal of a beautiful toy store. I mean, my God, there were whole next level displays just for Barbie's shoes. Her shoes. The giraffes there were Steiff, if you please, and went for at least a hundred a pop.

In stark contrast, the giraffe at Toys "R" Us had no gold button in his ear. He was Geoffrey, the proletariat, long-necked mammal for the bridge and tunnel crew. He had a goofy-ass giraffe family, and at Christmas, he was the star of infectious ad campaigns that boasted, "The world's biggest toy store is Toys 'R' Us! The biggest selection! Toys 'R' Us!" It seemed impressive, especially if you were from a small state known mainly at the time for its violent crime rate.

Toys "R" Us was, for generations of regular, unfancy children, that one perfect place, the store you dreamed of being locked in overnight. (Hand to God — I, old adult, had this dream in the past week) My family trips there were infrequent and therefore wildly exotic. It was messy and accessible and real, in a way that FAO and Macy’s and certainly the American Girl store never even wanted to be. It was, like its equally now defunct sister store Babies "R" Us, a retailer that seemed aimed at actual children instead of efficiency or worse, Instagram, minded adults.

I learned this when I became a mother. Revisiting Toys "R" Us with my own children decades after the store had embedded itself in my happy childhood memories, I discovered that it was actually pretty gross. Fluorescent lights blinked intermittently. Unattended stuffed animals littered the aisles. Cheap electronic devices barked randomly. My kids thought they'd died and gone to heaven. I had to admire the loud, undeniable Jersey-ness of it all.

And that's what can't be replaced. You can't order an experience online. You can't even find it in a discreet corner of Target or Walmart. A toy store is not an afterthought while mom and dad buy, I don't know, grout. A toy store whispers, "This is just for you, children. Your loud, obnoxious kingdom with an entire section devoted that one toy your parents realllllly hate so hard." Pouring out a 40 today for every parent who tried to circumnavigate the early 2000s LAND OF BRATZ.

What ultimately killed off Toys "R" Us may come down to changing consumer tastes or a simple case of poorly thought out strategies and insurmountable debt. The world changes, and what felt like a dream yesterday isn't even an afterthought today. But while nobody mourns landlines and network television for good reason, that childhood rite of passage of roaming around an actual physical space crammed with action figures and science kits and dress-up sets is something that will be authentically missed. Even Toys "R" Us kids have to grow up sometime, but at least we had the chance, for a little while, to be them.