Trump calls for the death penalty for drug dealers

As he called for capital punishment for drug pushers, Trump echoed authoritarian leaders he has heaped praise upon 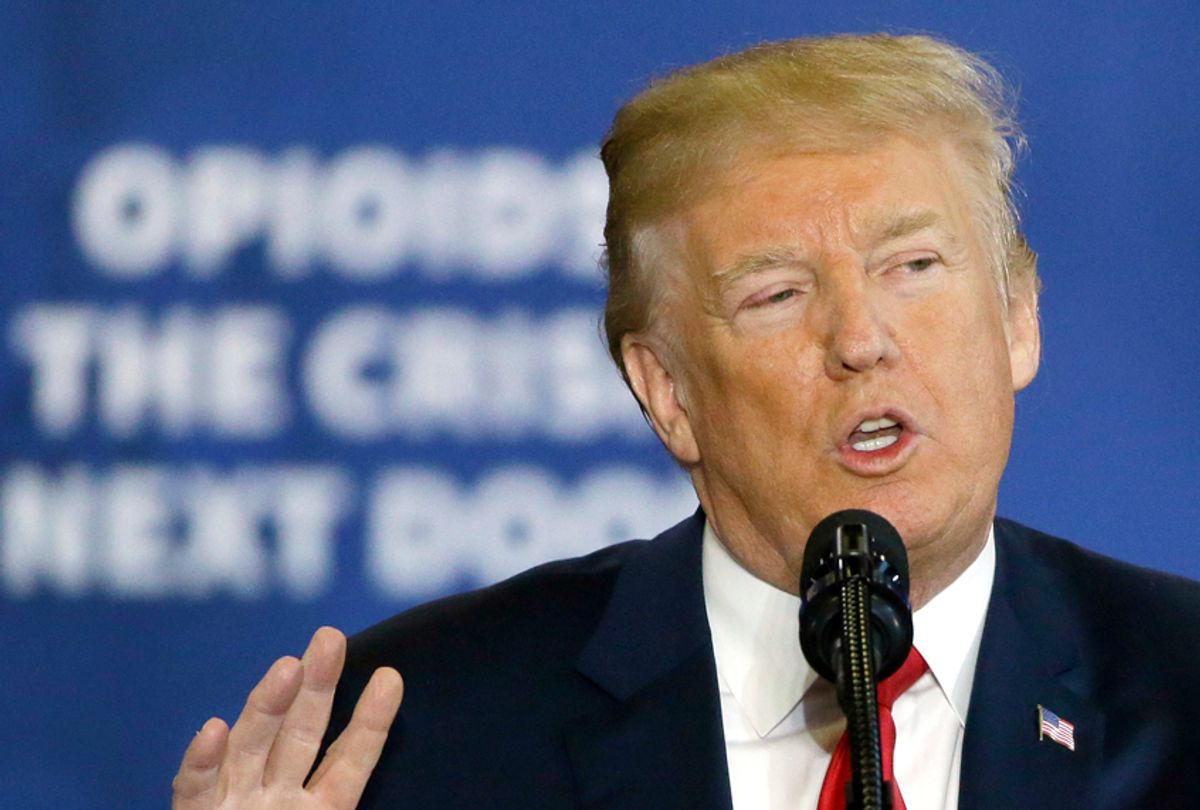 Inspired by authoritarian leaders across the globe, President Donald Trump sternly, yet ominously, touted his plan to get tough on drugs as he vowed to seek the death penalty for some narcotics pushers.

"I love tough guys, we need tough guys," Trump proudly declared on Monday in Manchester, New Hampshire, a state that has been hit hard by the American opioid epidemic. "If we don't get tough on the drug dealers, we are wasting our time."

He continued, "And that toughness includes the death penalty."

Trump's infatuation with the drastic proposal has been reported for a number of weeks, and it has been inspired, at least in part, by the zero-tolerance policy championed by the authoritarian leaders he has praised in China, the Philippines and Singapore.

The president has praised Philippines President Rodrigo Duterte, who has enacted a brutal drug crackdown since taking office, which has left more than 12,000 dead in extrajudicial killings. "They don't play games," Trump said of other nations' drug policies.

Trump went on to state that drug dealers "will kill thousands of people during their lifetime," although they will not receive harsh enough punishment. "This is about winning a very, very tough problem. And if we don't get very tough on these dealers, it is not going to happen, folks," he said.

"The only way to solve the drug problem is through toughness," Trump continued.

Along with the death penalty, the president also blasted sanctuary cities and declared that getting rid of them was "crucial to stopping the drug addiction crisis."

He took shots at Democrats as well, and confidently proclaimed his infamous proposal to build a wall along the U.S.-Mexico border as if it would be a be-all, end-all solution.

"Eventually the Democrats will agree with us to build the wall and to keep the damn drugs out," Trump stated.

He also seemed to take aim at drug manufacturers, saying the Department of Justice would take action against them. But Trump's rhetoric on big pharmaceutical companies, which many have attributed to being a primary driver of the opioid crisis, has often fallen flat. The pharmaceutical industry cashed in on Trump's tax plan, and he has done little to request proper treatment funding that health experts have said was vital to easing the epidemic.

Monday's speech is the latest in the Trump administration's avowed drug war redux, which has tethered drug crime and immigration policy into one.