Chris Cuomo grills Rick Santorum on the hypocrisy of evangelicals

As evangelicals have adamantly stuck with Trump, only one Republican lawmaker has called them out 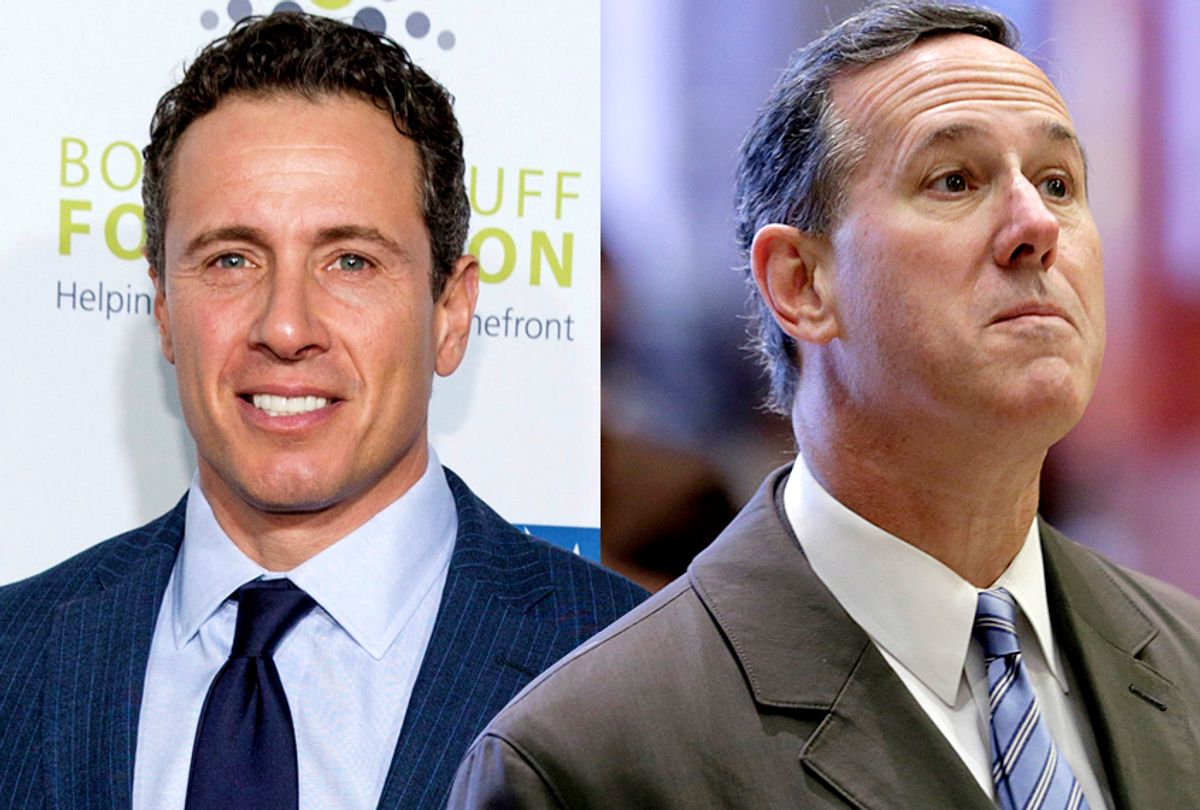 The hypocrisy of Evangelical Christian conservatives in the era of President Donald Trump is unlike any other.

In an interview on CNN, "New Day" host Chris Cuomo talked with Rick Santorum, a senior political commentator for the network who is Catholic but has ties to the evangelical community, about their lasting support for the president. Cuomo pointed out the "apparent hypocrisy" of evangelicals who have continued to support Trump despite all of his unbecoming characteristics, hateful rhetoric or immoral behavior, all because the two have a common interest and want to advance a political agenda.

He added, "With people who say they put faith first, character has to count, it always has...Now all of a sudden everything is forgivable."

Santorum said that's something that "goes on both sides" and pivoted to the actions of former President Bill Clinton, who was impeached after he lied about his relations with Monica Lewinsky.

"Let's just be honest about this," Santorum said. "The politics seem to trump everything these days, and unfortunately that is the case. The former Pennsylvania senator explained he has condemned Trump for actions he's disagreed with.

Cuomo quickly jabbed, "But you’re not going out of your way to talk about him with these affairs, either. Like the way you did with Bill Clinton."

Cuomo said Trump has been viewed by evangelicals as a King David figure. Santorum agreed and said admitted that King David was a flawed man.

"Because they judge things that are between man and God all the time when it suits them," he added. "It just feels if you put a D next to his name instead of an R, there would have been a lot of loud and proud people talking about it."

One Republican lawmaker, however, has seemed to have taken issue with how evangelicals have handled themselves.

"I don’t know how many in the evangelical community can reconcile some of their positions at this moment," Rep. Charlie Dent, R-Penn., told CNN's Anderson Cooper on Tuesday night.

Cooper asked Dent's thoughts about what would have happened if the shoe were on the other foot and former President Barack Obama has been involved in a similar affair.

"They’d be waving a bloody shirt," Dent replied. "It’d be a human rights violation had it been the shoe on the other foot."

"A lot of folks were pretty darn alarmed and outraged and had a strong voice about it, saying 'character counts,'" he added. "Now that the shoe's on the other foot, a lot of those same folks are pretty damn silent."

In the end, evangelicals have continued to stick with Trump regardless of his words or actions.