Time to rethink how we talk about older people

The elderly are only celebrated when doing things associated with youth. Time to rethink how we talk about aging 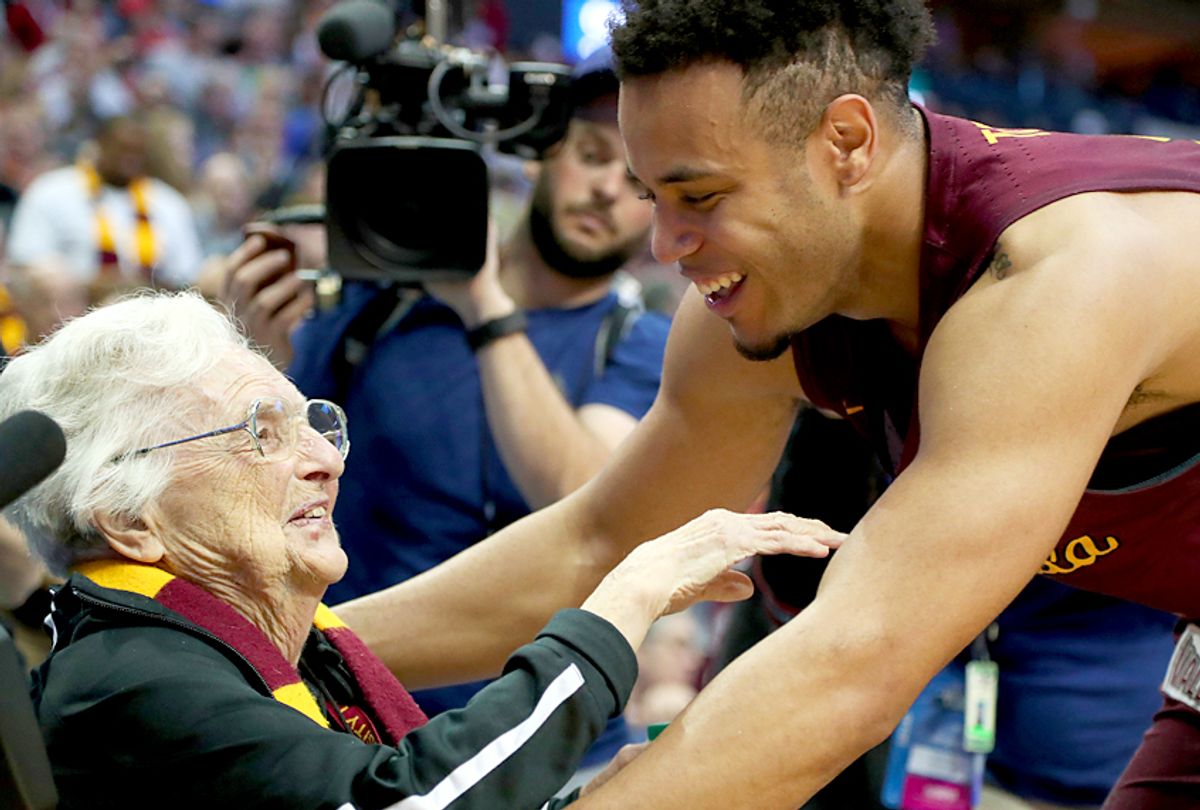 This week, a very American headline appeared in Time magazine: “Sister Jean Merchandise Is Selling Like Crazy for Loyola. Here’s How Much She’s Making.” One day later, the British Broadcasting Corporation published an article from a very British perspective titled “This 98-year-old sports mascot nun is captivating Americans.”

If you haven’t heard of Sister Jean (and how could you not?), she’s a 98-year-old woman, nun, and team chaplain for Loyola-Chicago’s basketball team. Bobbleheads have been made in her likeness, and as Time explained, Sister Jean paraphernalia might well be the most popular March Madness merchandise sold this year. ESPN reported that her name has been mentioned in 20,526 stories in the last two weeks. A montage video of her was produced by Ringer Records, called "Sister Jean" and paired to a rendition of Michael Jackson’s “Billie Jean.” And online, she's become a meme in her own right.

“There's no argument to be made: Sister Jean is the story of the 2018 NCAA tournament,” said Darren Rovell, an ESPN senior staff writer.

When reading about Sister Jean, whose full name is Sister Jean Dolores Schmidt, adjectives like “adorable” and “cute” pop up. Some call her a “gift” to America — others, a “media darling.”

There’s no question Sister Jean is inspiring to many. Her happiness is contagious. Her loyalty to the basketball team is admirable. Sister Jean also coaches the players on strategy, and gives them spiritual guidance before games. From what her fellow sisters from her order have said, she’s a smart leader who has been in a position of service for a majority of her life. I’m not here to say her new-found notoriety is undeserved, but rather wondering: why didn’t it arrive sooner? And isn’t it ironic that American culture — a culture obsessed with youth, and which has a multibillion-dollar industry around anti-aging — obsesses over people older than the age of 85, but only when they exhibit youthful traits?

Sister Jean isn’t the only senior to become famous for being both elderly and active. Indeed, in 2016, Täo Porchon-Lynch’s name splashed the headlines for being a 90-something yoga teacher. In 2012, she was  named the Oldest Living Yoga Teacher by Guinness World Records.

In one of many profiles written about her (all of which were captivating merely because of her interesting life), Newsweek headlined theirs "Ageless in spirit — yogi still teaching at 98.”

Then there was the 62-year-old American Apparel model profiled in Elle, George H.W. Bush's skydiving adventure at 90, the 80-year-old Everest hiker... I could go on till I was old.

Dr. Bill Thomas, an author and co-founder of ChangingAging.org, calls this type of rhetoric the “Tyranny of Still.”

Of course, such a sentence is meant to be a compliment. But when one takes a step back and applies the same sentence to someone, who let’s say is a kid, or to someone of a different race, it’s downright offensive. Thomas gave the example of saying a 12-year-old still uses a bottle.

Most of us, myself included, are guilty of proliferating ageism to some extent — praising those who are older who exhibit youthful traits. When I heard about Sister Jean, I also had an initial reaction to what others had: an urge to call her “cute.” Yet now I wonder, at what point does that cross over into objectification? Or is it merely patronizing?

Thomas explained that America’s obsession with older people who still live youthful lives is part of what he calls a "totemic myth."

“It’s a story we tell ourselves to console ourselves,” he said. “It makes us feel a little better. ‘Oh, she’s 97 and people just love her, so I don’t have to fear my own aging in quite the same way.’”

Perhaps that’s because society treats aging as a disease, and in a youth-driven culture we’ve been given no option other than to fear it. We’re told to hide our wrinkles, and dye our grey hair. After a certain age, one is essentially expected to look the same age for the rest of one's life. The solution — to embrace aging, rather than fear it — is complicated, given that the fear of aging is so evidently linked to the fear of dying. It’s hard to truly imagine a world where aging isn’t a trepidatious experience.

But Thomas says it doesn’t have to be, and it could just start with a shift in perspective.

“Today we say aging is to decline,” he said. “Tomorrow I would say the story should be that aging is growth, and growth is change.”

As for Sister Jean, she is indeed enjoying her time in the spotlight.

“This is the most fun I’ve had in my life,”she said in a USA Today interview. “It is just so much fun for me to be here, and I almost didn’t get here, but I fought hard enough to do that because I wanted to be with the guys.”

And maybe that’s really why America can’t get enough of her: In this chaotic time in history, she’s happy. It could also be that simple.