What cable news viewership reveals about the 2018 midterm elections

MSNBC's numbers are on the rise, and strategists see a direct correlation between viewership and voter sentiment 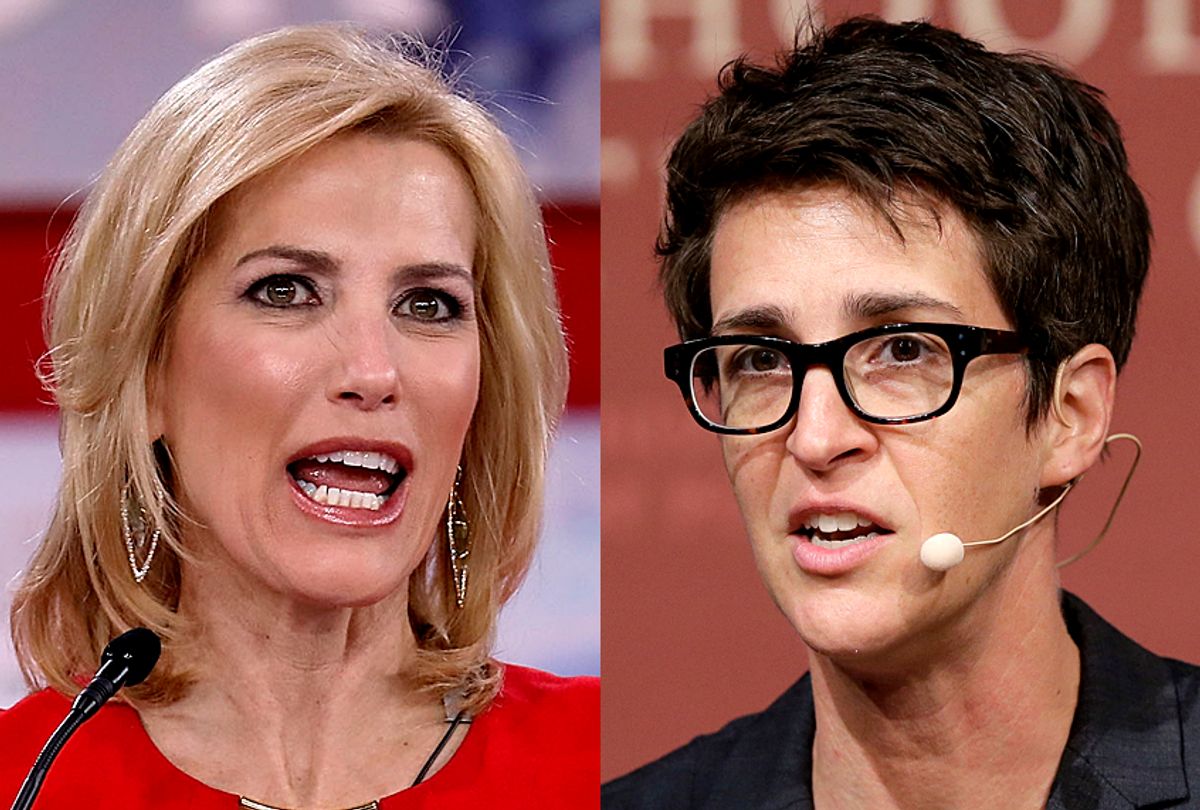 Embattled conservative cable personality Laura Ingraham returned to Fox News Monday night with significantly less  advertisers after mocking 17-year-old Parkland shooting survivor David Hogg for being rejected by his preferred colleges last month. And her return to the spotlight was overshadowed by the decision of two more brands who decided to join the choir in yanking their ads from "The Ingraham Angle" as they fielded uncomfortable questions from consumers in the wake of the broadcast.

On the other side of the political spectrum, while both Fox News and CNN lost viewers between 2017 and 2018, the audience for liberal haven MSNBC has skyrocketed by 30 percent. And with midterm elections quickly approaching, Democratic strategists feel encouraged about this changing tide in cable news – and the implications it has about the future of American politics.

"While Fox News held its standing as cable TV’s No. 1 network both for total day and prime time, MSNBC finished second in both categories, enthusing Democrats who see the rise of the network — powered by the liberal commentary of star host Rachel Maddow — not just as a reflection of energy within their base, but as a tool to help candidates in the coming elections," Politico reported.

Politico offered a compelling parallel. Fox News scored its largest average audiences since its launch in the first quarter of 2010, as the Barack Obama administration approached its first midterm election cycle. That fall, Republicans gained a whopping 63 seats in the House. Given the partisan divide in cable news today, it is not far-fetched to imagine there is a strong link between viewership and voter sentiment.

While "The Ingraham Angle" remains one of the five most-watched programs in cable news, Nielson data indicates that viewership has done little to shield Ingraham from fleeing advertisers. Hogg called on advertisers to boycott Ingraham's show after her distasteful remark — and CBS reports that at least 19 advertisers, or about 50 percent of her total on-air sponsors, have now pulled their advertisements on account of her comments. (This number excludes Blue Apron and SlimFast, the two companies that yanked ads on Tuesday.)

Ingraham's apology came just a day after her dig against Hogg, but it proved largely ineffective in retaining advertisers. Although, it is worth noting that Ingraham has a long history of voicing harmful and offensive opinions, among them that Mexican immigrants enter the U.S. "to murder and rape our people"; undocumented people who attempt to cross the border after deportation should be shot; and black athletes should "shut up and dribble." The Fox News host has also likened same-sex marriage to incest and polygamy. Yet, apparently, these tirades were not incendiary enough for advertisers to walk away.

Ingraham's language, which mirrors much of the rhetoric used by President Donald Trump, points to contemporary right-wing politics anchored more by feelings of resentment and attacks on minorities – including people of color, immigrants, the LGBTQ community, Muslims and the poor – rather than arguments rooted in fact. And given how inextricably linked Fox News and Trump have become, with the network a significant mouth piece for the president and its hosts fervently parading pro-Trump messaging, a decline in viewership for Fox News could be inferred as a direct correlation to disproval for the president.

"These numbers show that Republican campaigns can't count on Fox News to reach their voters as much as they could have a year ago," Democratic strategist Pete Giangreco told Politico. "They are going to have to use data to find out where those viewers have gone in order to continue to reach them in 2018."

Fox still pulls in 1.4 million total average viewers, but MSNBC now follows closer behind at the one million mark. "I think there are a lot of people out there who are dramatically troubled by the direction of the country, and they would like to be reminded that a) they’re not alone, and, b) there is an alternative," Stuart Stevens, the Republican strategist at the fore of Mitt Romney’s 2012 campaign and a Trump critic, told Politico. "I basically consider MSNBC the 'it doesn’t have to be this way' channel."

The reality that the two, top-rated cable news networks espouse views on opposite ends of the political spectrum, compounded with CNN's 13 percent drop in viewers, indicates a notable shift in modern news and politics. As much as people want to agonize over political division, there is becoming little interest in the balance of old that continues to be championed by CNN.