Gov. Eric Greitens has been accused of horrific acts of sexual misconduct in scandal that may lead to his downfall 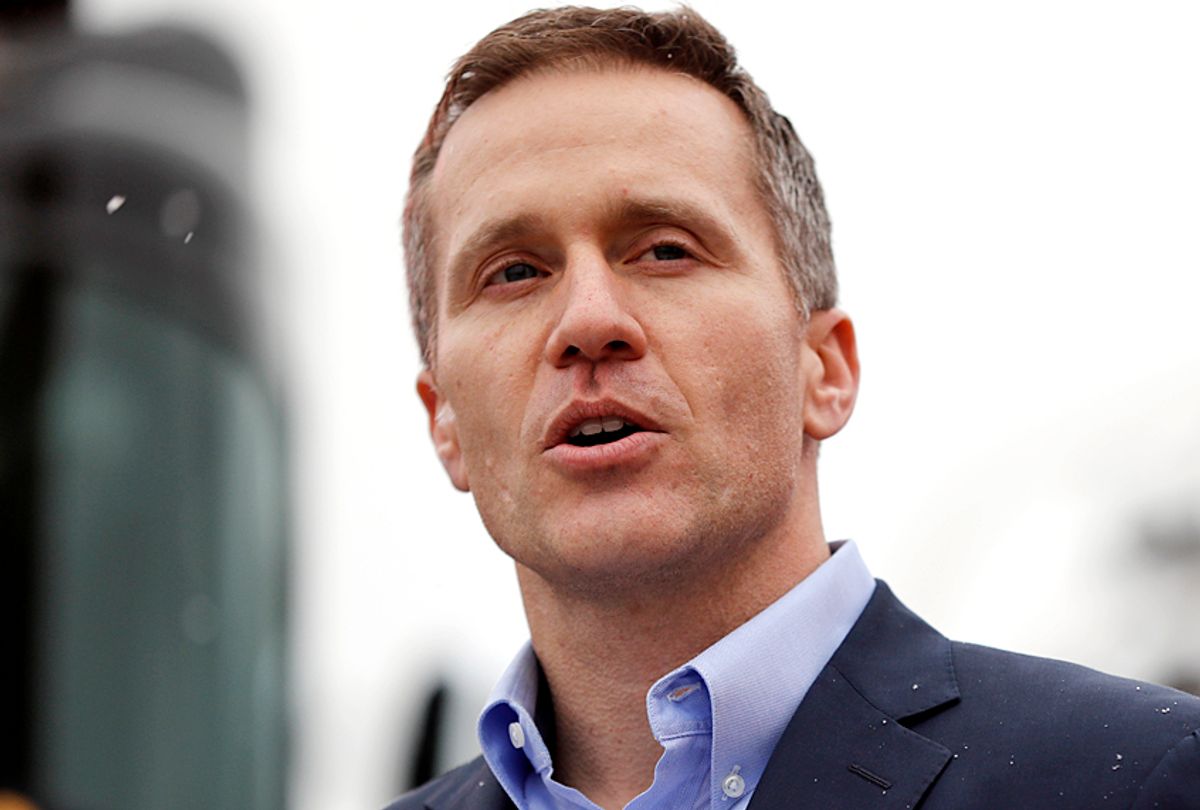 Missouri Gov. Eric Greitens is facing calls for his resignation from members of both parties as more horrifying details come to light about the sexual misconduct accusations against him.

A St. Louis hairdresser told a committee in the Missouri House of Representatives that Greitens beat her, coerced her into sexual activity and threatened to blackmail her in his basement in March 2015, according to the Kansas City Star. The Star's description of how Greitens allegedly treated the anonymous woman is harrowing:

The woman told the committee that Greitens had led her down to the basement, taped her hands to pull-up rings, blindfolded her, spit water into her mouth, ripped open her shirt, pulled down her pants and took a photo without her consent.

He threatened to make the photos public if she ever told anyone about their encounter, and called her "a little whore," the woman told lawmakers.

After her hands were freed, she said she felt she had no other choice but to perform oral sex if she was going to get out of the basement.

The woman claimed that there were other sexual encounters with Greitens in 2015, with some being consensual and others being non-consensual. She also claimed that he hit her on some of those occasions.

Greitens has insisted that, contrary to his accuser's accusations, he simply engaged in a consensual affair, and has refused to resign despite a call from Missouri Attorney General Josh Hawley for him to do so. The House committee to which the woman testified — which contains five Republicans and two Democrats — concluded that her testimony was credible, perhaps because they also spoke with two of her friends (who both claimed that she had relayed this story to them at the time) and the woman's ex-husband.

Missouri House Speaker Todd Richardson also said that the "beyond disturbing" testimony was enough that a special session should be called to consider disciplinary actions that could include impeachment.

"The power given to the Missouri General Assembly to take disciplinary action or remove elected officials from office is one of the most serious and consequential powers the Constitution grants the legislature. We will not take that responsibility lightly. We will not act rashly, but we will not shrink from it," Richardson declared in light of the testimony.

Rep. Ann Wagner, a United States Representative from Missouri, has joined in the calls for Greiten's resignation.

"This is a sad chapter in our history that should never have come to pass. Two months ago, after the disturbing allegations against the Governor came to light, I called for an immediate and transparent investigation. The transcripts paint the picture of a vulnerable woman and a man who preyed on that vulnerability," Wagner explained in a statement in which she also declared that Greitens was "unfit to lead our state."

The woman's testimony painted a very different story, according to CNN.

"You're not going to mention my name. Don't even mention my name to anybody at all, because if you do, I'm going to take these pictures, and I'm going to put them everywhere I can. They are going to be everywhere," he said, according to her testimony, "and then everyone will know what a little whore you are." The governor previously denied that he had ever blackmailed or threatened the woman.

His wife also urged the public to look past the scandal, characterizing it as an affair for which she had already forgiven him.

"We understand that there will be some people who cannot forgive—but for those who can find it in your heart, Eric asks for your forgiveness, and we are grateful for your love, your compassion, and your prayers," Sheena Greitens explained in a statement.