The law says super PACs can't coordinate with candidates. Rick Scott is one of many Republicans who ignore that 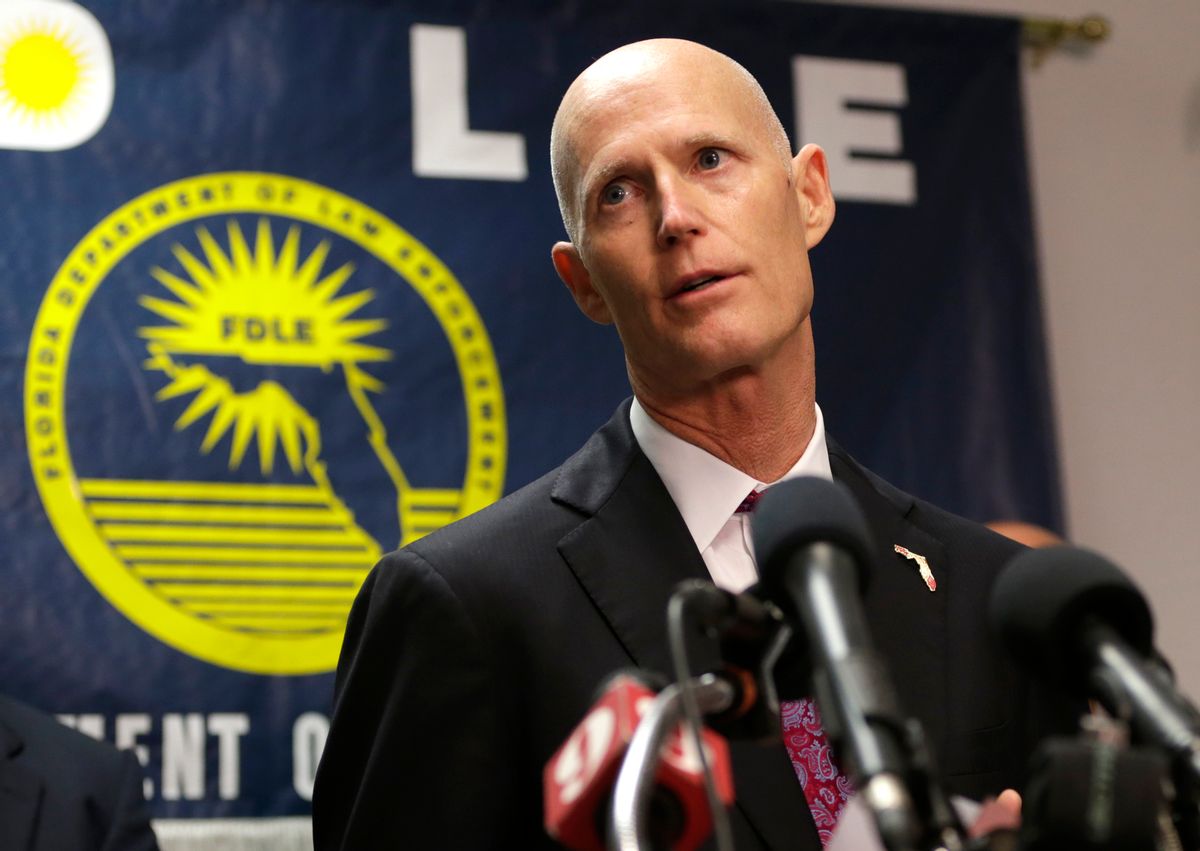 Florida Gov. Rick Scott makes a statement at a news conference in response to a deadly shooting outside the Club Blu nightclub in Fort Myers, Fla., Monday, July 25, 2016. Police said the gunfire, which erupted at a swimsuit-themed party for teens, was not an act of terrorism. (AP Photo/Lynne Sladky) (AP)
--

Rick Scott. Florida's Republican governor, has spent his time in Tallahassee building a reputation as one of the most shameless right-wing ideologues in the country. He's second only to Gov. Scott Walker of Wisconsin in terms of pushing a far-right agenda onto a swing state. Now he's running against incumbent Democratic Sen. Bill Nelson in one of this fall's most high-profile races, and already Scott is awash in accusations of shady, corrupt behavior.

Now the group End Citizens United has filed a complaint with the Federal Election Commission, accusing Scott of illegally using a "super PAC" to support his campaign and skirt federal limits on direct contributions to candidates. Super PACs are allowed to both raise funds and spend them without limits, but they are not allowed to coordinate directly with campaigns. End Citizens United claims that Scott is evading that anti-coordination law with the New Republican PAC, a group whose chairmanship he abandoned shortly before announcing his candidacy -- and which is now dedicated to electing him to the Senate.

“He has put his own interests and political ambitions first, ahead of the law, and has found a way to get around election law by raising soft money into this super PAC that was purportedly for Donald Trump," Adam Bozzi, communications director for End Citizens United, told Salon. “He used this super PAC to skirt campaign finance laws, pay for expenses associated with his candidacy, and avoid the troublesome disclosure law and the limits that come with that.”

Ryan Patmintra, communications director for Scott's Senate campaign, denied the accusations. He characterized Scott as having only been an "honorary chairman" of the super PAC and said that Scott "severed all ties with New Republican in February," a little over a month before he announced his Senate run.

"The fact is that Gov. Scott has always, and will continue to, operate his campaign activity transparently and in accordance with the law," Patmintra added.

In response, End Citizens United sent documentary evidence that Scott had worked closely with the super PAC in recent months. For instance, the website for the New Republican, which is now dedicated to electing Scott, presented the group as a pro-Trump PAC as recently as January, and Scott was listed as chairman, not "honorary" chairman. Salon took screenshots demonstrating that Scott was presented as the leader of a PAC with which he is now not legally not permitted to coordinate.

In February, the Tampa Bay Times reported that Scott was raising funds for the PAC. In March, the Washington Post reported the governor was hosting a dinner with donors to the New Republican, a PAC he now pretends he has nothing to do with. As Marc Caputo of Politico reported Thursday on Twitter, the New Republican was doing campaign work for Scott as recently as the last week of March, running a poll to determine the feasibility of a Senate run.

"Thus it appears as if Scott consented to the Committee spending funds on behalf of his candidacy," the End Citizens United complaint reads. It appears that Scott "has been using the Committee to improperly pay for expenses associated with his exploratory activities and his candidacy for Senate."

Bozzi told Salon that candidates who use super PACs for unlimited fundraising and then try to argue they aren't coordinating with them, based on technicalities, is a "gigantic, growing problem, particularly among Republicans." Jeb Bush, for instance, created the Right to Rise PAC in 2015 and heavily raised funds for it before he announced his ill-fated presidential campaign -- which was the PAC's sole purpose after that. Carly Fiorina was repeatedly accused of coordinating with a super PAC created to support her 2016 campaign. Unfortunately, the Federal Election Commission is understaffed and deadlocked, making enforcement of campaign finance law a joke.

The legal discourse around this can be headache-inducing in its complexity, but its effects are all too obvious.

"It is terrible for our democracy because this allows politicians to find new ways to bring big money and special-interest money into the system," Bozzi said. "The result is tax cuts that go to the top one percent while the deficits exploded and Social Security and Medicare end up on the chopping block. That’s how it affects real people."

There are solutions. In the short term, elected officials could staff the FEC with people who actually care about enforcing the law. (In reality, that means electing more Democrats.) Congress could also pass disclosure laws such that even if candidates use gray areas and loopholes to raise money outside traditional channels, the public will still know where all this unlimited spending is coming from.

But that's not what the long game requires. “Ultimately we need to find a way to overturn Citizens United," Bozzi said, either through the court system or through a constitutional amendment rejecting argument that free speech also includes unlimited spending on political campaigns. It's a long, uphill battle, but flagrant behavior like Rick Scott's makes clear that the feeble rules in place at the moment will not protect democracy.