Scott Pruitt purchased a home in 2003 from retiring lobbyist: report

In a new NYT report, he allegedly purchased the home with a discount which was reportedly picked up by her employer 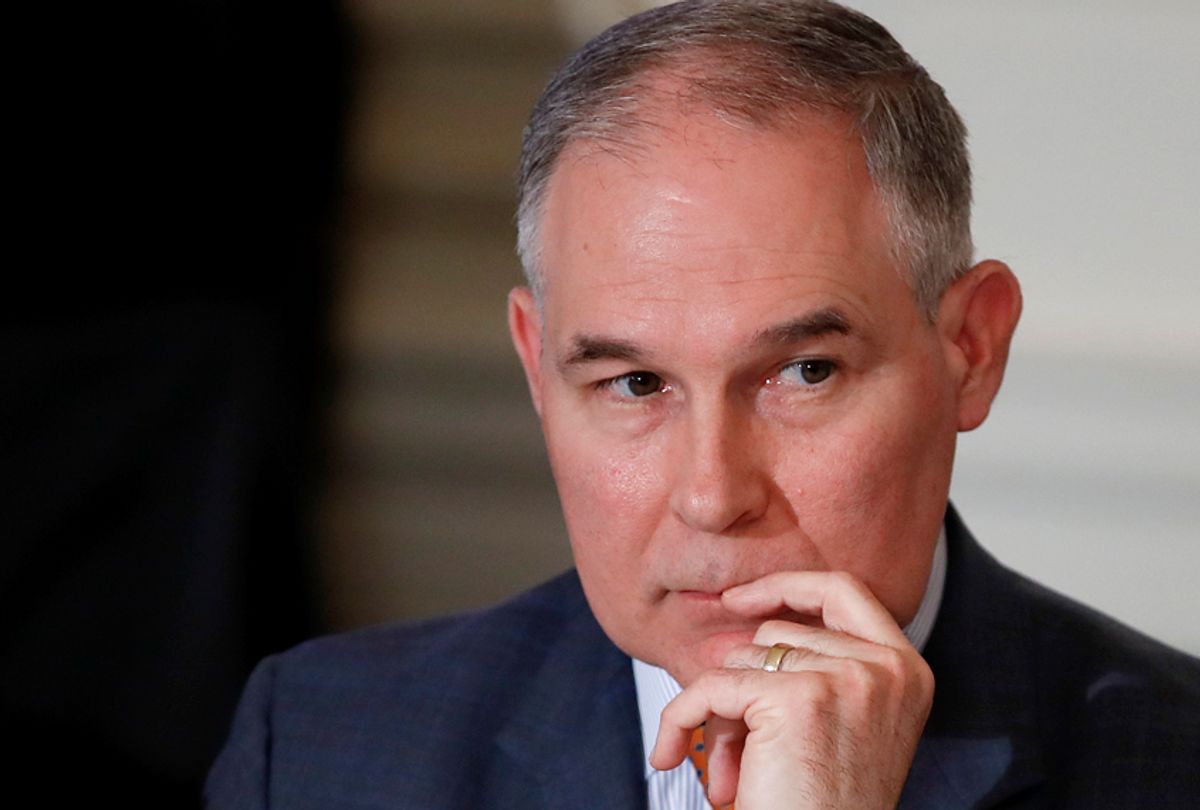 Details around Scott Pruitt’s alleged unethical behavior continue to emerge, painting him as even more corrupt politician provoking some in Washington to continue to call for his resignation.

Indeed, according to a new report in the New York Times on Saturday, the Environmental Protection Agency administrator allegedly bought a house from a retiring lobbyist—via a Shell company listed to business partner, Kenneth Wagner, who is now employed at the agency. The real estate records, and other public records, examined in today’s New York Times’ report are from Pruitt’s career in Oklahoma.

The report specifically cites two alleged events: the first, in 2003 with Wagner, who is now the now an EPA senior adviser for regional and state affairs. The second is regarding the mortgage on the house, which was reportedly issued by Albert Kelly, who currently leads the agency’s Superfund program, according to the report.

Pruitt reportedly reached out to “an influential telecommunications lobbyist,” Marsha Lindsey—when he reportedly had a state salary of $38,400—after attending a gathering at the home. She was preparing to retire and move.

“For those ego-minded politicians, it would be pretty cool to have this house close to the capitol,” Lindsey told the New York Times. “It was stunning.”

Pruitt eventually stayed at the pad, and according to Lindsey in the report, bought her dining room set, art and antique rugs.

According to real estate records, the 2003 purchase of the house for $375,000 came at a steep discount of about $100,000 from what Ms. Lindsey had paid a year earlier — a shortfall picked up by her employer, the telecom giant SBC Oklahoma.

SBC, previously known as Southwestern Bell and later as AT&T, had been lobbying lawmakers in the early 2000s on a range of matters, including a deregulation bill that would allow it to raise rates and a separate regulatory effort to reopen a bribery case from a decade earlier. Mr. Pruitt sided with the company on both matters, state records show.

In 2005, the shell company — Capitol House L.L.C. — sold the property for $95,000 more than it had paid. While shell companies are legal, they often obscure the people who have an interest in them, and none of Mr. Pruitt’s financial disclosure filings in Oklahoma mentioned the company or the proceeds — a potential violation of the state’s ethics rules.

The Oklahoma City deal, which has not been previously reported, was one of several instances in which Mr. Pruitt appeared to have benefited from his relationships with Mr. Kelly and Mr. Wagner while in state politics.

Pruitt is currently under investigation and facing allegations of unchecked spending, and various ethical wrongdoings including additional suspicious relationships with lobbyists. Earlier in April, news broke that Pruitt had reportedly rented a townhouse at below-market rates from the wife of a lobbyist who represents major fossil fuel companies in Washington.

Salon exclusively reported that was not the first time Pruitt’s behavior around a property purchase raised concerns.

According to documents obtained by the Center for Media and Democracy, a nonprofit watchdog group, Pruitt and his wife bought a property in Tulsa, Oklahoma, a few days before a court concluded that it had been fraudulently transferred by a Las Vegas developer who was being held responsible for a $3.6 million loan default.

“While this transaction raises numerous questions, there is nothing on the face of these documents that is clearly illegal,” Arn Pearson, the executive director of the Center for Media and Democracy, wrote in Salon. “If any of the parties involved knowingly arranged for a preferential transfer to avoid a court judgment, however, that would imply significant legal issues. The same would be true of any pre-arranged deal to flip the property in a way intended to provide Pruitt, who was then Oklahoma's top law enforcement official, with a quick windfall profit.”

As allegations continue to emerge, more lawmakers are calling for his resignation—leading to some voice their opinions on Twitter and use the hashtag #BootPruitt.

Nearly 170 lawmakers have also signed a resolution calling for his resignation.