"Hotep Jesus" appeared on Fox News to bash Starbucks and white liberals, and how that happened is stranger still 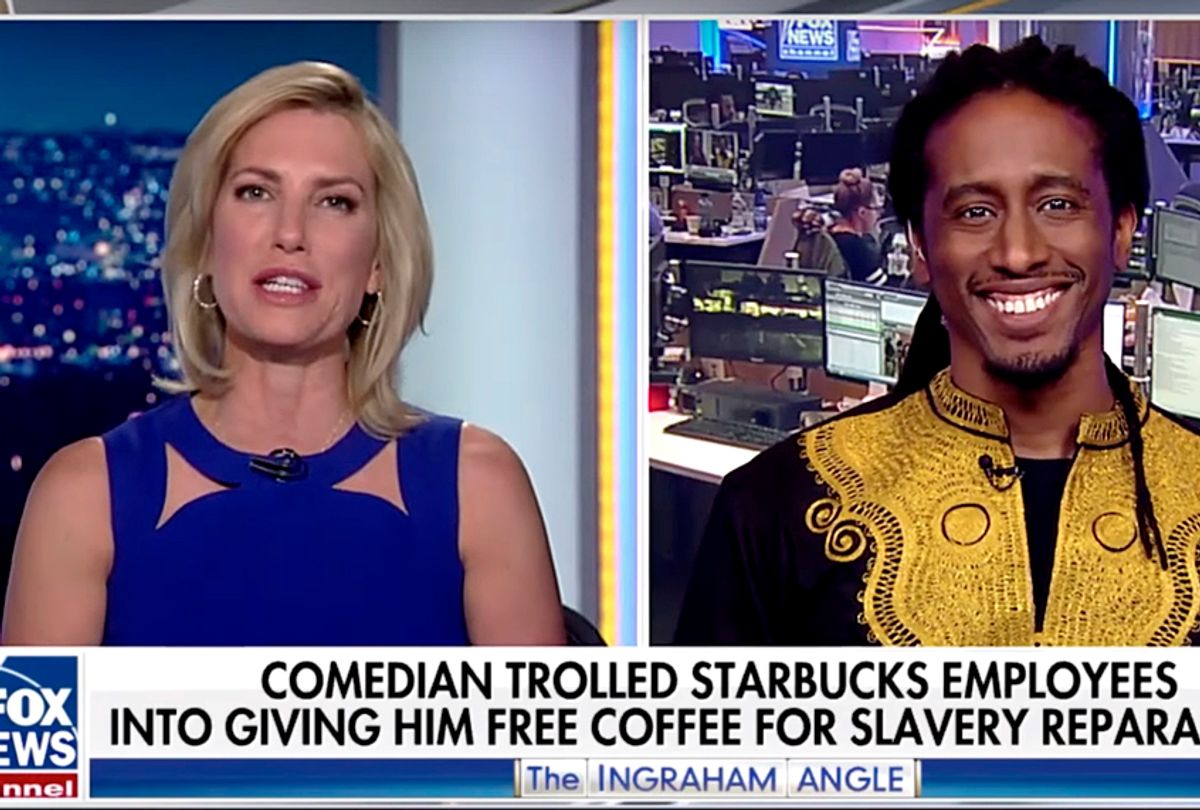 Far-right media figures have long had it out for Starbucks, the Seattle-based coffee chain that has become known for its efforts to portray itself as a progressive business. Christian nationalist commentators have had a particular antipathy against the company for removing Christmas symbols from its coffee cups in December. Last week, the company’s decision to require all its employees to undergo racial sensitivity training, following the unjust arrest of two black men in a Philadelphia Starbucks store, has raised right-wing hackles.

Instead of being upset at Starbucks for having created a business environment where a manager felt that calling the police on two men who were doing nothing unusual was somehow appropriate, a number of conservative commentators have lashed out at the company for allegedly succumbing to “political correctness” by making employees attend a seminar.

The latest Starbucks controversy has also, unsurprisingly, proved very animating to the white nationalists sometimes called the “alt right.” Beyond raging against the café company, several members of the toxic /pol/ forums on 4chan and 8chan began making fake digital coupons supposedly issued by Starbucks which entitle customers of African descent to free coffee. Bearing all sorts of far-right inside jokes such as references to coupon code 1488 (a coded phrase for “Heil Hitler”) and racist QR codes, the images were designed to fool unsuspecting black customers into presenting them in Starbucks locations to cause even more trouble for the chain.

As has becoming increasingly common during the age of Donald Trump, a white nationalist meme crossed over into regular conservative media. This time the person responsible for the crossover was a black man named Bryan Sharpe, a member of an emerging black nationalist faction whose members call themselves “hoteps,” after the ancient Egyptian word for peace.

Known for its embrace of pseudo-history about Egypt and its general neglect of the rest of Africa, the hotep movement is relatively new. Not everyone who uses its terminology identifies with the political right, but much of the subculture utilizes concepts and ideas that are thoroughly incompatible with leftist or progressive ideology.

In fact, a significant portion of self-identified hoteps have so much in common with far-right white nationalism — a deep hatred of feminism and a love of anti-Semitic conspiracy theories, among other things — that the group has been dubbed the “ankh right” by some of its black critics.

On Sunday, Sharpe (who uses the internet name Hotep Jesus) propelled the small but growing movement into the mainstream conservative world when he uploaded a video of himself trolling a Starbucks employee into giving him a free cup of “reparations” coffee.

The clip of Sharpe’s stunt was picked up by pretty much every right-wing media outlet. As People for the American Way’s Jared Holt observed, numerous sites such as the Drudge Report, the Daily Wire, Infowars, Independent Journal Review, TheBlaze, RushLimbaugh.com and WND promoted the clip.

Sharpe’s conservative star turn culminated in an appearance last Wednesday evening on Fox News, where host Laura Ingraham presented the Hotep Nation blogger as a next-generation Chris Rock. “I am sick and tired of liberals using black people and making us look like victims, making us look soft with their liberal dogma. It is disgusting,” Sharpe said. “The other thing I hate about liberals is if you’re a black man, as I am, in America, they will not hand you a microphone unless you follow the liberal narrative.”

Ingraham ate it up. “We’re wondering why did you just go for the coffee, why didn’t you go for like the entire blender to make those fancy smoothie drinks,” she said.

It’s unclear whether the Fox News host or her producers had bothered to look up Sharpe’s controversial background. As Holt and other left-leaning critics were quick to point out, the black activist has a long record of spouting anti-Jewish conspiracy theories -- and even defending the white nationalists whose rally last year in Charlottesville, Virginia, led to the deaths of several people.

“The African American community is in a frenzy. They’re crying about racism, slavery and everything else they can pull out of their toolbox of victimhood,” Sharpe wrote in a post bemoaning the “suppression of conservatives” that he alleges is a tremendous problem in America. After denouncing black Americans for creating a false sense of victimhood, the Hotep Nation blogger portrayed white nationalists as the real victims of “antifa” activists who expose and protest against extreme-right activists:

The truth is, Alt-right is the victim here. These people chose to exercise their freedom to assemble and they were viciously attacked by ANTIFA goons. This group ANTIFA is probably being funded by the same people that were funding Black Lives Matter.

Reached via email, Sharpe declined to comment to Salon about his past remarks, including an appearance he made on a neo-fascist YouTube channel last year, where he argued that black nationalists and white nationalists share many of the same ideas. “We’re hoteps and alt-right people are like the red-pilled people,” he said, using a common far-right metaphor drawn from "The Matrix," referring to forbidden knowledge that has supposedly been suppressed by tyrannical leftists.

One of those commonalities, Sharpe argued, was that both racial groups believe that Jewish people secretly control the world. “They’re the people that know about fractional reserve banking. They know about the jig, the man behind the curtain,” he told vlogger Henrik Palmgren. A month before that, the future Fox News favorite had utilized the white nationalist triple parentheses meme in a tweet series that claimed Jewish people seek to divide people of European and African descent. 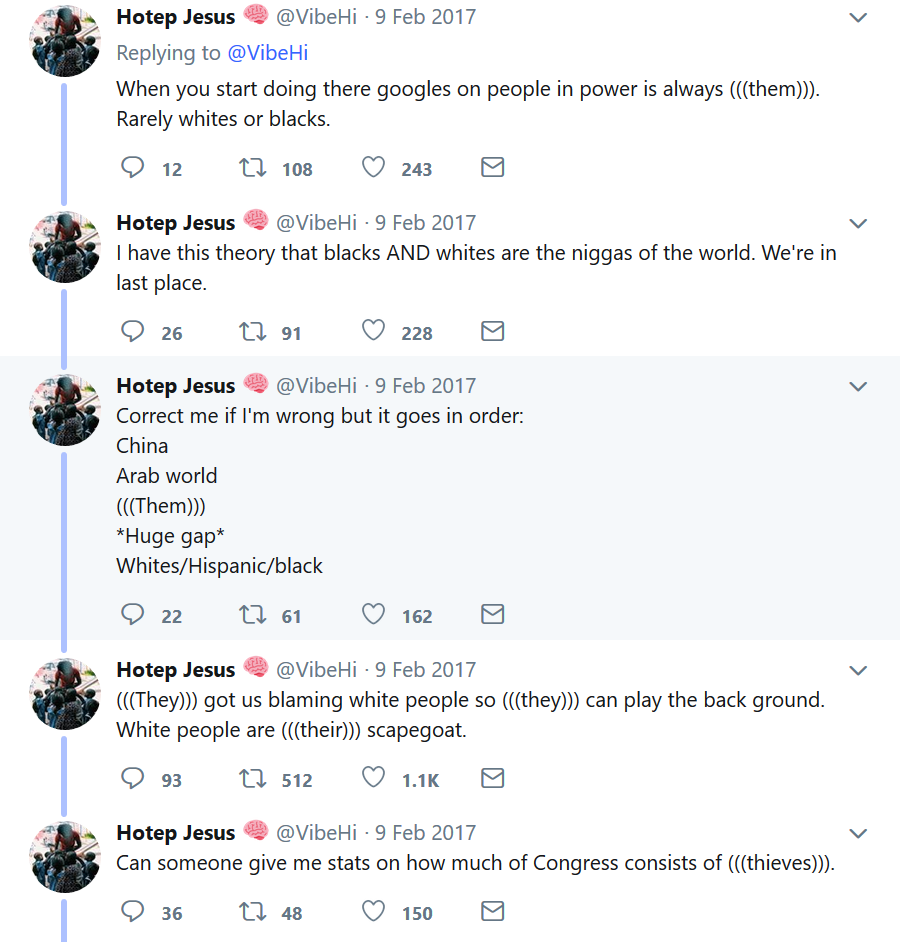 Hoteps also have other strange beliefs, including the idea that white people have forced black women to menstruate or that homosexuality is a creation of Jewish people to feminize African men. In a video released last year, David Pino discussed some of these:

As Pino notes, the idea of some on the black right making common cause with white nationalists is not entirely new. During the 1960s, with the emergence of the Nation of Islam, the black nationalist group made a number of overtures to neo-Nazi groups, even once holding a fundraising event with the American Nazi Party. The "alt-right" and the hoteps aren't there yet. But considering that the white nationalist mascot Pepe the Frog is often jokingly described as a manifestation of the Egyptian god Kek, we can't rule anything out.