We can't binge-watch "Brockmire," and that's a problem

This Hank Azaria dark comedy is best consumed in a single pass. Problem is, we only get one episode a week 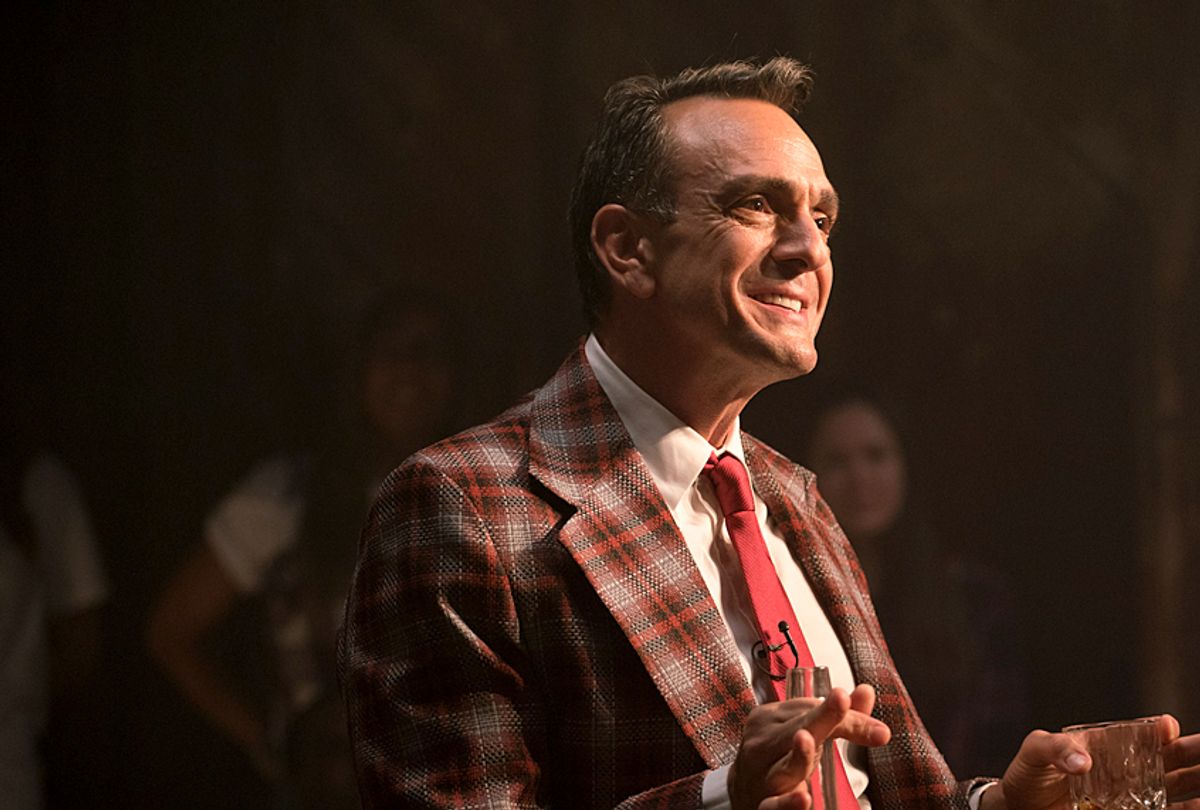 With increasing frequency, series producers are constructing their season arcs with an eye toward binging. A perfect example is IFC's "Brockmire," returning for its second season Wednesday at 10 p.m. Hank Azaria's wildly crass, relentlessly dark comedy airs one new episode each week, like any typical series scheduled on a linear television channel. Minus commercials, seven of this season's eight episodes clock in at under 22 minutes. The only one that doesn't, the season finale, is under 24 minutes.

Brevity can be a blessing, don't get me wrong. With prestige dramas churning out episodes that rival the length of many feature films, knowing that you can plow through an entire season of "Brockmire" in three hours is a relief.

Therein exists the main quibble I have with these new episodes. In order to really comprehend where the show's writer, Joel Church-Cooper, is taking Azaria's Jim Brockmire in this second season, a person really needs to watch the first. (Helpfully IFC is running a marathon during the daytime on Wednesday. The full first season is also available on Hulu.)

Then, in order to understand why "Brockmire" has already earned renewal for a third and a fourth season, you should probably watch the bleak but still good second season in a single pass.

The fact that I'm even thinking about how to watch "Brockmire" as opposed to whether to watch says a lot about our own TV habits and expectations, I guess. Plenty of TV series require me to defend them by assuring people they get better after the premiere, so keep watching. (Most of those shows, by the way, exist on streaming services.)

The new season of "Brockmire," meanwhile, requires the warning that it gets darker very quickly but earns every bump on the way down.

"Brockmire" works because of the debased grandiloquence Azaria pours into the title character. Few comedies can pitch floridly foul yet intelligent dialogue and not only get away with it, but make it the backbone of the show's appeal.

Brockmire, a character Azaria originated in a 2010 Funny or Die video, is a man who reacts to life sucker-punching him by setting his career ablaze and hanging out in an assortment of third-world dives. In the show's first season, Church-Cooper devised a well-crafted, expediently delivered redemption tale about a big league broadcasting ego knocked back to the minor leagues — a comedic reflection of America itself.

Only when he lands in Morristown, a Pennsylvania hamlet leached of all hope by the gas industry, does he believe that he has hit bottom at last. Not quite. During the decade that he sequestered himself in a merry-go-round of calling cock fights and frequenting brothels, his on-camera meltdown made him a meme. His return to broadcasting, modest though it may seem, marks his comeback.

The new season proves how wrong Brockmire was to believe that the worst chapters of his life were behind him. Deceptively, though, Brockmire's new setting is far more attractive than Morristown. Now he's in the Big Easy, calling games for the New Orleans Crawdaddys by day and helming a highly popular podcast titled "Brock Bottom,"  which requires him to engage in the two other activities he enjoys as much as baseball, if not more: monologuing and drinking himself into a stupor.

Certainly "Brockmire" provides a surfeit of nihilistic giggles and libertine adventure in the first half of this new season. As for the episodes that close the season . . . how do I put this? They accurately capture what it feels like when an addict's parachute fails and he spectacularly smashes on some canyon's floor.

Outsized though his personality may be, Brockmire is a man whose frailties threaten to break him at any given moment. Throughout this new run of half-hours, Church-Cooper writes and Azaria prove that their guy isn't one of those magical TV characters who can chug gallons of top shelf brown liquor and inhale drugs as if they are oxygen without consequence.

He remains single-mindedly focused on returning to the glory days of his career, even if that means alienating the people who care most about him.

And he's still a middle-aged guy with a liver that's been battered into submission.

So while the new season opens with Brockmire in full decadence, using a woman's buttocks for a pillow while wearing a silky kimono, very quickly he slides out of this Elysium and into an ocean of excreta of his own making. Unlike the trajectory of his Morristown arc, in this season his downward spiral ceases to be funny about three-quarters into the season. Jim Brockmire devolves quickly and loudly and eventually he's just gross.

Telling people to record "Brockmire" for a mass guzzling later on doesn't help IFC in terms of viewership or, for that matter, any viewer who's looking for a level and consistent weekly dose of comedy.

"Brockmire," as the title hints, is a character-driven series, and that makes its serialized elements easier to jump into midstream than other series. Then again, since the comedy's overall success is reliant on how strongly a viewer connects with Azaria's character, forging that relationship is absolutely essential — especially in this new batch of episodes.

In New Orleans, Jim Brockmire isn't consistently buoyed by supporting characters who collaborate to call forth the virtues of Brockmire vigorously attempting to waterboard with booze. Off the top you'll notice the absence of Amanda Peet's Jules, his season 1 love interest. Jules served to prevent Brockmire from becoming a two-dimensional parody of himself. But she is absent this year as the series retrains its focus on Azaria and Tyrel Jackson Williams' Charles, the young social media guru who moves with Brockmire down to New Orleans.

Although Azaria and Williams make a potent comedy duo, there's little of the tenderness and vulnerability in their partnership that the star has with Peet. Instead, Charles is a guy whose tolerance for his partner's alcohol-fueled antics and self-involvement steadily diminishes as the story rolls forward. That's the point, but it also makes me wonder how patient people will be to stick around to watch Brockmire expend the forbearance of everyone who surrounds him, one sip at a time.

But as Brockmire himself points out in the season premiere, witnessing the torment of the most vulnerable among us has the power to bring us all together.  In that regard, this new season is still pretty great nevertheless, though probably better without having to wait a week between progressively demented installments.