Antonio Banderas and the muddled portraiture of "Genius: Picasso" 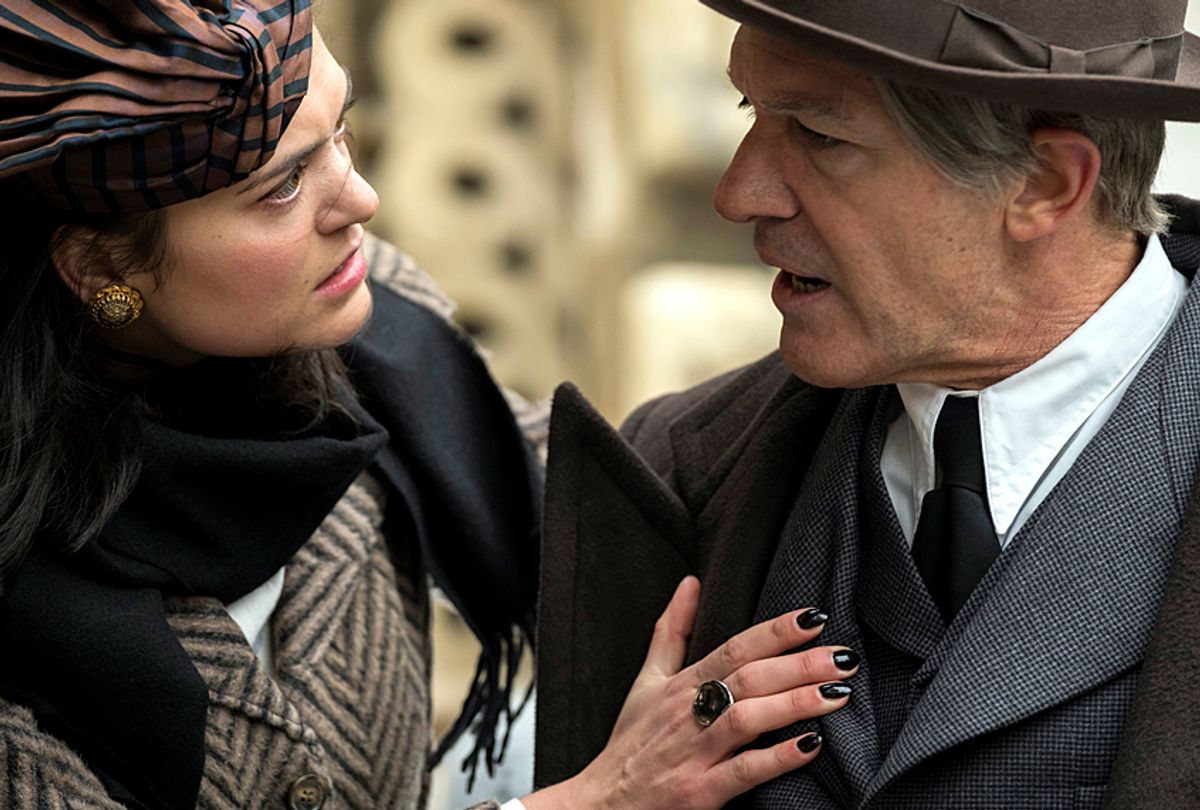 Whether the subject is Albert Einstein or Pablo Picasso, each installment of National Geographic’s “Genius” opens with a shot of the title character between a woman’s legs. Einstein’s introduction to the audience comes by way of an up-against-the wall interlude with his office assistant.

Our first glimpse of Picasso, meanwhile, shows his mother screaming as she pushes the future painter and sculptor into the world.

Separately these images would make it appear that the series portrays the women entangled in each man's life as crucial to informing their brilliance, as necessary as any whispers received from the universe. Not so much.

As posited by “Genius: Picasso,” debuting Tuesday at 9 p.m., vitality and seduction fuel the creative fires and passions of extraordinary men. Women are the flints sparking those flames. When they crash into one another. . . well. In Picasso’s story, the result is the mural-sized 1937 masterpiece “Guernica,” partly inspired by a catfight in his studio between his mistresses Dora Maar and Marie-Thérèse Walter.

And I use the term catfight intentionally here. History and Picasso himself refer to the confrontation as a wrestling match, but that connotes some version of agreed upon ground rules between the participants. As recreated in “Genius” by Samantha Colley’s Maar and Poppy Delevingne’s Walter, it’s a fiery fantasy observed and immortalized by the artist, sweeping his brush across a gigantic canvas as the women push and claw at one another.

“Genius: Picasso” builds upon the same architecture as the 2017 entry, right down to the same timeframe. A cuter production might have even left an Easter egg or two with Picasso glimpsing a photo of Geoffrey Rush’s Einstein. For all we know, that may yet happen; only four of the new season’s 10 episodes were made available to critics.

Repeating a tale of one span in history, specifically the late 1800s and early 1900s through the looming threat of fascism as the Nazis tore through Europe World War II, isn’t the most pointed criticism a person could make about this season. These new episodes do make a few references to Picasso’s role in battling tyranny and how deeply he valued liberty, and though it may be a stretch, one could see thematic parallels between his artistic acts of resistance and those of our time. But in "Genius," even these are obscured banal examinations of his many loves and personal losses, to say nothing of his famously enduring affection for himself.

It is not out of bounds to question why executive producers Brian Grazer and Ron Howard allowed “Genius” to profile two men, contemporaries of the same era, back-to-back. Surely they’re aware of how this redundancy looks, likely informing their announced selection of "Frankenstein" author Mary Shelley as the focus of season 3.

The producers chose well in casting Antonio Banderas as the older Pablo Picasso. Banderas lends a smooth and assured manner to a mature Picasso, right down to selling the man's  unfortunate late-in-life coif. The actor's ability to vacillate between quiet force and simmering displeasure conveys the artist’s legendary pride and ego in a way that doesn’t alienate the viewer.

Such an approach is necessary if the goal is granting some insight in a personality as dominated by artistic drive and aesthetics as he is devoted to his pursuit of carnal pleasures, as seen in this exclusive clip showing Picasso and Maar in one of their happier, sexier moments.

Less effective is Alex Rich’s embodiment of the younger Picasso, interspersed with Banderas' part of the day as the script saunters through the artist's formative years. As Johnny Flynn (who has a cameo this season as French actor Alain Cuny) does in season 1, Rich has the dual task of playing Picasso while matching the quirks and traits of Banderas’ take on Picasso. The net result is distracting, to put it kindly.

Basically Rich is imitating a famous guy emotionally invested in representing his fellow hometown hero as well as possible  — both Banderas and Picasso were born in Málaga, Spain — translating to a painful cartoon rendition of an Andalusian accent.

He’s not alone, actually. While several actors are merely punching up their natural inflections, others such as Seth Gabel woefully attempt to evoke some version of Parisian elocution that blows your wig off. Even this doesn’t reach the heights T.R. Knight’s astounding take on the poet Max Jacob: Just when you think he’s nailed the physicality of the man, he opens his mouth and out leap the linguistic stylings of Pepe Le Pew.

Picasso, by way of Banderas, is a charismatic guy whose bona fides as a genius are never in doubt. A woman could even understand why formidable talents such as Maar and later in Picasso's life, Françoise Gilot (Clémence Poésy) would be drawn to him. They hung on, despite his disregard for their emotions or any outward evidence of loyalty.

Nevertheless, not one of those strained romances tells us anything profound about Picasso’s progression as an artist or serve to explain the methods that went into his pioneering work or his founding of seminal genres, namely cubism.

Instead these hot-blooded affairs provide easy miniseries fluff for showrunner Ken Biller, who also directs several episodes, to mold into entertainment. More’s the pity. For if the expectation of “Genius” is to grant the viewer some sliver of enlightenment about the inner workings of complex minds, it has fallen down in its mission yet again.

This is especially apparent in Colley’s return for season 2. I have no problem with her performance, or Poésy’s or Delevingne’s; each funnels the frustrations of the women they play into their roles in singular and interesting ways, though Delevingne has fewer tones to work with as Walter, a woman Picasso says he liked “because she was sweet and gentle and did whatever I wanted her to.”

Maar, the subject of a number Picasso’s paintings, is an artist in her own right whose import and effect on her lover’s work, and his upon hers, is denied an expanded explanation within the four opening hours beyond establishing her as his muse. Colley stands out in this season in the same way that her portrayal of Einstein’s first wife Mileva Maric shines in the first, where she shows us why Maric was a scientist worthy of a full episode’s focus.

But at its outset “Genius: Picasso” features no such equivalent examination of its women. This not only shortchanges them, it shorts Picasso himself. The glory of Colley’s work in the Einstein season is that it added an important caveat to the biography and legend surrounding the man in the title; as it wrote then, she allows us to witness Einstein’s inquisitive nature as it is filtered through intellectual attraction.

In the Picasso entry, Colley's Maar and other women are compelled to remain in the artist's orbit for barely fathomable reasons beyond the notion that talent is an effective attractant. Very quickly this view grows irritatingly facile.

Worse, “Genius: Picasso” recreates the life of one of the 20th century’s highest aesthetic innovators by utilizing cliché-riddled dialogue and commonplace scenery. Given Picasso’s lasting and very tangible legacy as an originator — his artwork graces cities around the world — this shortcoming feels acutely disappointing. One would think the spirit of the man would embolden the writers and directors to manifest the fundamentals of his oeuvre within each episode’s presentation.

The Einstein season achieves this, somewhat, by externalizing the cognitive mechanics of its subject’s theories, calling forth glimmering animations to show the audience his view of the universe. Regardless of that season’s numerous flaws, those touches of magic work well.

Oddly “Genius: Picasso” leans upon telling more than showing, resulting in a basic approach to Picasso’s world. He “sees” the subjects of his portraits, and poof! They are captured in oils and acrylics. Maar and Walter tussle and after the Nazis bomb the Basque village for which the painting is named, and boom! That’s how that happened.

Adapting such a literalist’s take on a life driven by the conceptual is baffling given the resources available to Biller to get this story right.  Presumably the narrative's creative possibilities weren’t bound by budgetary constraints but by the limits of creativity within the writers themselves.

“Genius: Picasso” is gorgeously filmed, no argument there. Production locations in France, Spain and Hungary do much of the heavy lifting, and the cinematography makes the most of each space’s unique light, streets and geography.

And if you’re searching for a clue as to how Picasso mastered and employed the art of wooing, winning and juggling so many love affairs at one time, this season has you covered. As for illuminating the hidden gifts that earned him the title’s designation that, sadly, is a work left unfinished.