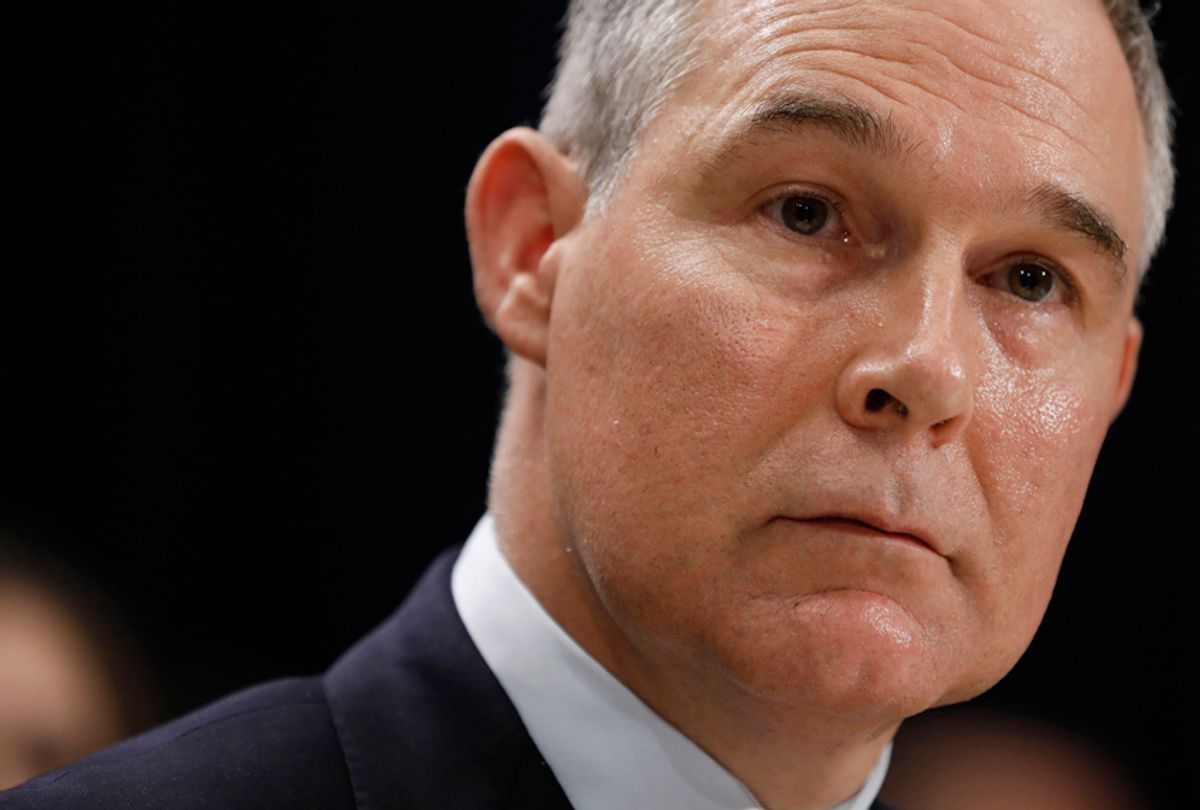 The new rule, which conservatives have been championing for years, would require the Environmental Protection Agency to only use studies in making decisions when the underlying data itself has been made publicly available, according to The Washington Post. Although Pruitt and his supporters claim this is being done in the name of transparency and protecting the public interest, critics point out that it is impractical to expect legitimate scientific studies to publicly disclose all of their data. Implementing this requirement, critics say, would make it impossible for the agency to use many studies that have already helped the American public.

Some researchers collect personal data from subjects but pledge to keep it confidential — as was the case in a major 1993 study by Harvard University that established the link between fine-particle air pollution and premature deaths. That practice would not be allowed under the new rule.

A former Environmental Protection Agency administrator also told the Post that, if Pruitt's proposed rules were implemented, it would be difficult for high-quality studies to be used by the agency.

"The best studies follow individuals over time, so that you can control all the factors except for the ones you’re measuring. But it means following people’s personal history, their medical history. And nobody would want somebody to expose all of their private information," former EPA head Gina McCarthy, who now directs the Center for Climate, Health and the Global Environment at Harvard’s public health school, told the Post.

Studies which the EPA utilized to help the public but that weren't publicly available include some that proved air pollution and exposure to certain types of pesticides had detrimental effects on people's health.

"Pruitt is again attempting to limit the amount of mainstream, peer-reviewed science that can be used to dictate policy, only to the benefit of the corporate interests that have funded his entire career," Shaughnessy Naughton, a chemist and former congressional candidate who founded the pro-science advocacy nonprofit 314 Action, told Salon by email. "It's a dangerous policy that censors scientists and will take us back to a time when environmental stewardship took a backseat to corporate polluters and their short-sighted profits."

In regards to Pruitt's claim that he was trying to promote transparency, Naughton was incredulous.

"Look no further than his $43,000 taxpayer-funded private sound booth and you'll realize that Scott Pruitt and 'transparency' don't belong in the same sentence," Naughton told Salon. "These rules won't improve transparency, but will instead lead to further ignorance of science at the EPA."

Naughton's incredulity was shared by other experts when Pruitt's plan was first reported last month.

"A lot of the data that EPA uses to protect public health and ensure that we have clean air and clean water relies on data that cannot be publicly released," Yogin Kothari of the Union of Concerned Scientists told E & E News. "If EPA doesn't have data to move forward with a public protection for a safeguard, it doesn't have to do that at all. It really hamstrings the ability of the EPA to do anything, to fulfill its mission."

Betsy Southerland, a former senior EPA official who left the agency last summer to protest Pruitt's approach to the agency, had a similar observation.

"This is just done to paralyze rulemaking. It's another obstacle that would make it so hard and so difficult to go forward with rulemaking that in the end, the only thing that would happen — in the best case you would greatly delay rulemaking; in the worst case you would just prevent it. It would be such an obstacle you couldn't overcome it," Southerland told E & E News.

Naughton's reference to Pruitt's "taxpayer-funded private sound booth" was a reference to a larger controversy that has besieged Pruitt's tenure at the EPA. He has had a number of scandals since beginning his tenure there, including reports that clients from an energy lobbyist's firm had received favorable treatment after Pruitt received a lucrative deal on a condominium rental from that lobbyist's wife, that Pruitt had public employees do private work for him and gave one of those employees an unauthorized raise, that he arranged official travel trips for his personal purposes and that he punished employees who spoke out against his ethically controversial actions.

And, of course, that he violated the law by spending $43,000 on a soundproof booth for his office.

"EPA Administrator Scott Pruitt and his staff have engaged in a pattern of misconduct that undermines the integrity of the agency’s policy-making process, according to a request for investigation into the systemic failures of the EPA’s ethics program filed today by Citizens for Responsibility and Ethics in Washington (CREW) with the agency’s Office of the Inspector General (OIG)," Citizens for Responsibility and Ethics in Washington said in a press statement on Tuesday.

They added, "Several matters involving Pruitt and other senior EPA appointees raise serious concerns both about the process by which ethics advice and determinations are sought and made at EPA, and whether ethics and other laws were violated. These matters include allegations of accepting prohibited gifts, misusing government resources, and abusing travel and special hiring authorities, as well as engaging in retaliatory actions directed at employees who voiced objections to the conduct of top officials."

As The New York Times reported last week, Pruitt's ethical issues stretch all the way back to when he was still an Oklahoma state senator:

Early in Scott Pruitt’s political career, as a state senator from Tulsa, he attended a gathering at the Oklahoma City home of an influential telecommunications lobbyist who was nearing retirement and about to move away.

The lobbyist said that after the 2003 gathering, Mr. Pruitt — who had a modest legal practice and a state salary of $38,400 — reached out to her. He wanted to buy her showplace home as a second residence for when he was in the state capital.

“For those ego-minded politicians, it would be pretty cool to have this house close to the capitol,” said the lobbyist, Marsha Lindsey. “It was stunning.”

Soon Mr. Pruitt was staying there, and so was at least one other lawmaker, according to interviews. Mr. Pruitt even bought Ms. Lindsey’s dining room set, art and antique rugs, she said.

Pruitt is expected to appear before Congress on Thursday to discuss his proposal for the EPA's 2018 budget, and it is expected that when he does so he will also be grilled about the various controversies and scandals that have beset him and the agency during his tenure. Trump administration officials have been dissuading Capitol Hill Republicans from easing off in their defense of Pruitt, suggesting that the administration is losing support for the EPA head, according to Bloomberg.