The comedian came under fire for her fake decapitated Trump photo last year, but she wants to take the apology back 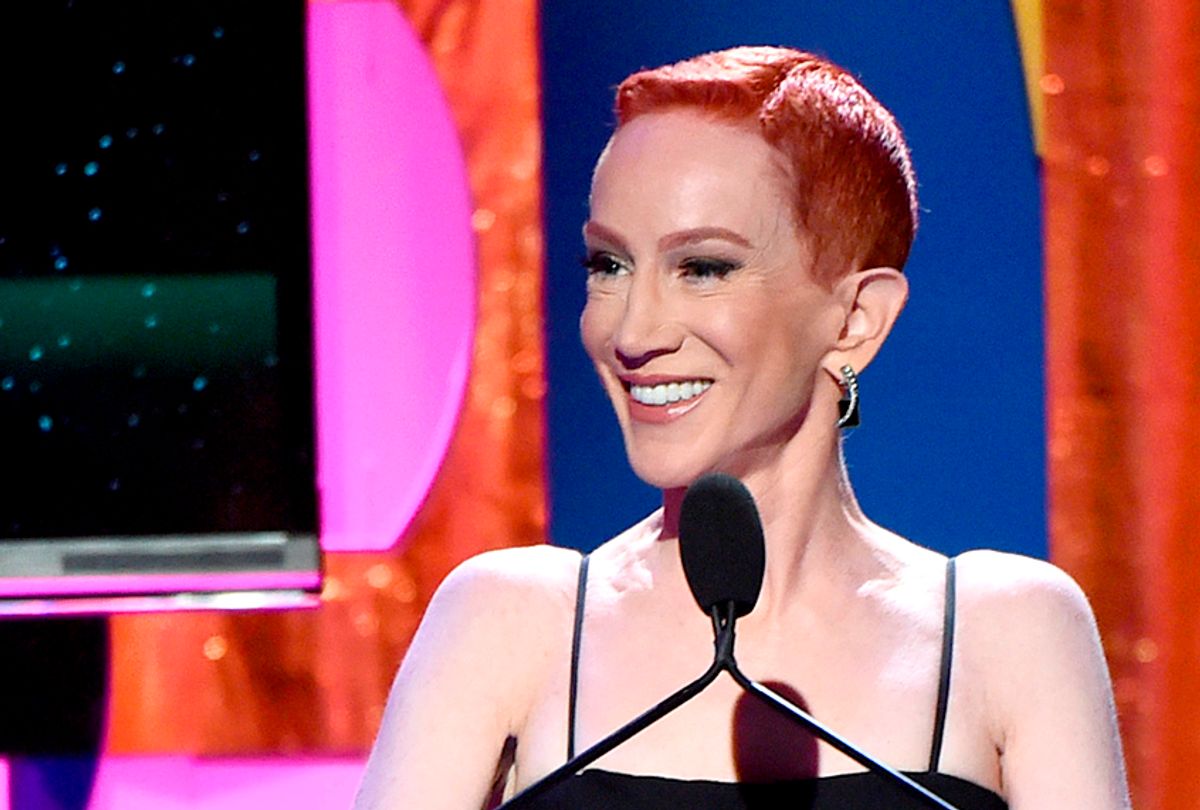 Comedian Kathy Griffin is walking back on her apology to President Donald Trump and the public for being photographed holding a bloodied mannequin head that resembled Trump.

During an appearance on "The View" Monday morning, Griffin wasted virtually no time before declaring to the show's hosts, "by the way, I take the apology back."

It has been almost a year since she taped an apology where she admitted that when she posed with a fake decapitated Trump head, she had gone "way too far." Griffin said then that she "sincerely" apologizes for the images and that she "understands how it offends people. It wasn't funny. I get it," and she asked for the public's forgiveness.

But Griffin said Monday that she regrets apologizing to Trump, and the same goes for Trump's children, Don Jr. and Eric Trump, whom she said she refers to as "Eddie Munster and date rape."

"Look, I'm not holding back on this family," she continued, to audience applause. "This president is different and I have been through the mill, and so now I'm back on the road. I sold out Carnegie Hall in less than 24 hours."

"When I found out that I was really just part of the Trump wood-chipper, which Michelle Wolf is in now," Griffin added, "I didn't know they had this apparatus already set up before my silly picture of a $5 Halloween mask and ketchup, and I wanted to make a statement about what a misogynist he is. And also I remember the eight years of the photos of Obama's lynching and nobody said anything; right, that was all okay. That was all on Facebook."

Griffin's point is one that has been buzzing on social media since comedian Michelle Wolf's controversial monologue at the White House Correspondent's Dinner Saturday, where she roasted everyone: Democrats, Republicans, Trump, Congress, Press Secretary Sarah Huckabee Sanders, et al. Press and lawmakers have called her jokes offensive and disgraceful and have demanded she apologize. But many people have interrogated the idea that a comedian, whether it be Wolf, Griffin or anyone else, be held to a higher standard than the president.

Trump has made despicable remarks about women, Mexicans, immigrants, Muslims, African nations, Obama, Clinton . . . the list goes on, and rarely has he apologized. In their jokes, both Wolf and Griffin have emphasized that nothing about Trump, his administration or tenure is normal and nor should it be treated as such.

Joy Behar asked Griffin if she's worried Trump supporters will attack her again, now that she takes back her apology. "They are, they're starting today," she replied. "The First Amendment is the First Amendment for a reason. It’s the first one! And also, I mean the thing is this guy just is different."

Griffin said that not only did she receive death threats, but so did her mother, who lives in a retirement village, and her sister, who was in a hospital for cancer treatment. Griffin went on to say that after her infamous photoshoot, the Department of Justice opened a two-month investigation "for conspiracy to assassinate the president of the United States." She said in conclusion, "f**k him."