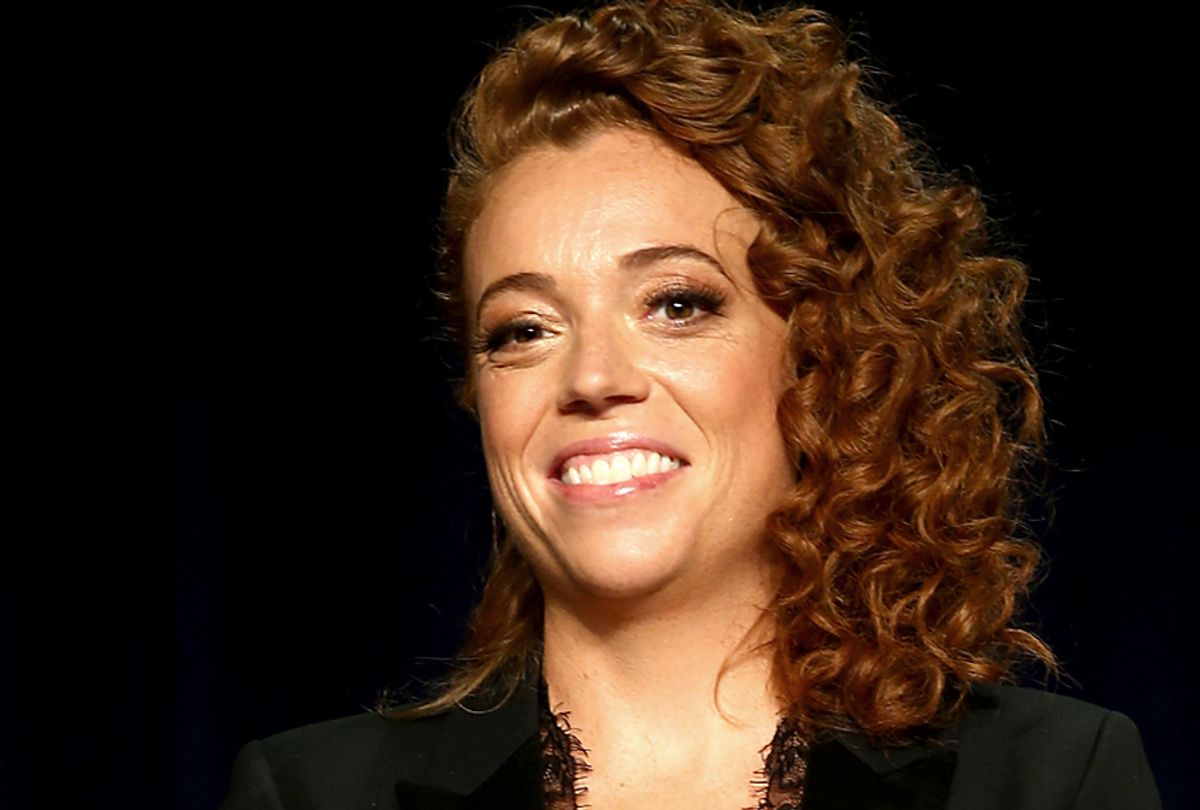 Michelle Wolf has become part of a prestigious group in the annals of White House Correspondents' Dinner history — namely, the comedians who wind up becoming "controversial" because of jokes which offend the powerful.

What were the jokes in question? According to the widespread media outrage, they're the ones that were directed at White House Press Secretary Sarah Huckabee Sanders and advisor Kellyanne Conway. Toward Sanders, Wolf joked that the press secretary looks like the villainous Aunt Lydia from "The Handmaid's Tale." She also commented that Sanders "burns facts and then she uses that ash to create a perfect smokey eye. Like maybe she’s born with it, maybe it’s lies."

About Conway, Wolf quipped that the special counsel to the president "has the perfect last name for what she does: Conway. It’s like if my name was Michelle Jokes Frizzy Hair Small Tits." She then urged the media to stop putting Conway on their shows, arguing that "if you don’t give her a platform, she has nowhere to lie. It’s like that old saying: If a tree falls in the woods, how do we get Kellyanne under that tree? I’m not suggesting she gets hurt. Just stuck."

The person at the top of the list of the offended was, not surprisingly, President Donald Trump himself.

"It was personally offensive. To me, that was an attack to impress Jon Stewart and Stephen Colbert. Congratulations, when the three of you go out to dinner, I’m sure you’ll be laughing a lot. But in terms of the people here and the people at home — totally offensive, horrible choice. In fact, it’s the reason why the president didn’t want to go," Brian Kilmeade, a co-host of one of Trump's favorite TV shows "Fox & Friends," said in the ballroom, about Wolf's speech, according to The New York Times.

Margaret Talev, president of the Correspondents' Association, seemed to share Kilmeade's perspective when she released a statement that agreed with the "dismay" felt by those who had attended.

"Last night’s program was meant to offer a unifying message about our common commitment to a vigorous and free press. Unfortunately, the entertainer’s monologue was not in the spirit of that mission," Talev wrote.

Maggie Haberman, a reporter for The New York Times, also felt that Wolf's performance had crossed an important line.

Similar sentiments were expressed by Andrea Mitchell and Mika Brzezinski.

CNN's Chris Cillizza, who is no fan of either Trump or White House Press Secretary Sarah Huckabee Sanders, was also scathing in his assessment of Wolf's performance.

I'm stunned that Sanders sat five feet away from Wolf and just took it.

Being funny is one thing. Bullying people because you can is another. And Wolf's treatment of Sanders was bullying.

And, yes, by the way, Trump is a massive bully. Making fun of a disabled reporter, stereotyping ethnic groups, attacking reporters for how they look -- all of that stuff is totally and completely unacceptable. And he knows exactly what he is doing, which makes it worse.

But two wrongs don't make it right. Because Trump bullied a disabled reporter doesn't mean Wolf should be able to bully Sarah Sanders. Bullying is bullying. And it's wrong. Always.

He also noted that Wolf, who had been a relatively obscure comedian prior to the dinner, had most likely planned for the ensuing controversy to stimulate publicity for her new show.

On a related note, her Netflix series, "The Break With Michelle Wolf" — comes on May 27. She couldn't buy better publicity for that show than she got with her speech on Saturday night.

Even if Cillizza is correct in ascertaining Wolf's underlying motives for putting in such a controversial performance, it is important to note that she is hardly the first comedian to use the Correspondents' Dinner platform for such a purpose. In 1996, shock jock Don Imus took repeated jabs at President Bill Clinton's adultery and Hillary Clinton's ongoing legal issues. Stephen Colbert's famous roast of President George W. Bush during the 2006 White House Correspondents' Dinner helped garner publicity for his then-new show "The Colbert Report," ultimately making his name into a household word. Five years later, Seth Meyers' roast of Donald Trump — who had been making headlines by publicly insisting that President Barack Obama had not been born in the United States — managed to humiliate the reality TV star with the help of the president himself.

In other words: Wolf has merely carried on the tradition embodied by Colbert and Meyers. She has spoken truth to power and, like all comedians who do so, been accused of inappropriate behavior in the process.

Objectively speaking, her comments about Sanders did not involve her looks. When she joked about how Sanders "burns facts and then she uses that ash to create a perfect smokey eye," the commentary was not on Sanders' appearance, but on her dishonesty. Similarly, when she compared Sanders to Aunt Lydia (whom Sanders looks nothing like), the jab was at the expense of totalitarianism. You could make the argument that comparing the Trump administration to a dystopian society is extreme or even silly, but it's absurd to claim that Wolf was trying to take down Sanders' appearance.

Even the Conway joke was very carefully constructed. Wolf called Conway a liar — and appropriately so — and then emphasized that her joke about a tree falling on the counselor to the president was not meant to imply that she wished bodily harm to befall her. Indeed, Wolf made sure to turn that caveat into a punchline of its own by specifying that she didn't want Conway to be injured, "just stuck."

There are other commentators who have also jumped to Wolf's defense on these issues.

Conservative commentator Ana Navarro told CNN's New Day on Monday morning that Wolf should win the Nobel Peace Prize because she managed to do what "nobody else has been able to do: get Trump supporters to actually go on TV and defend women from being skewered and offended for their looks." This was a reference to how Trump supporters want him nominated for the prize due to the recent peace talks between North Korea and South Korea.

Kathy Griffin, the comedian who stirred up controversy last year with a photograph that showed her holding up a decapitated and bloody Trump head, went on a long Twitter stream defending Wolf and calling out the media's hypocrisy in finding fault with her performance.

CNN's Chris Cuomo also took a stand against the attacks on Wolf, chiding conservative commentator Matt Schlapp for being outraged at Wolf's jokes while ignoring Trump's own demeaning comments about women's appearance.

"You’re not as upset about what the President of the United States says on a regular basis — and he’s not joking! So if you’re going to care about a comedian and be so offended by what jokes failed or didn’t fail, then where is it there?" Cuomo asked Schlapp.

Perhaps Arwa Mahdawi of The Guardian summed up this view best:

If anything, the likes of Haberman, Brzezinski, and Mitchell owe America an apology. They’re all incredibly smart women with extremely important jobs. They’re supposed to be holding power to account, not sucking up to it. Rushing to defend Sanders under a veil of faux-feminism is beneath all of them.

What’s more, urging Wolf to apologize for what should have been an uncontroversial joke sends an incredibly dangerous message. It suggests that it’s not OK to criticize the president and his people. And it lends credence to Trump’s repeated claims that the mainstream media is out to get him.