Luckily, people who do read books and know history took the recording artist to task 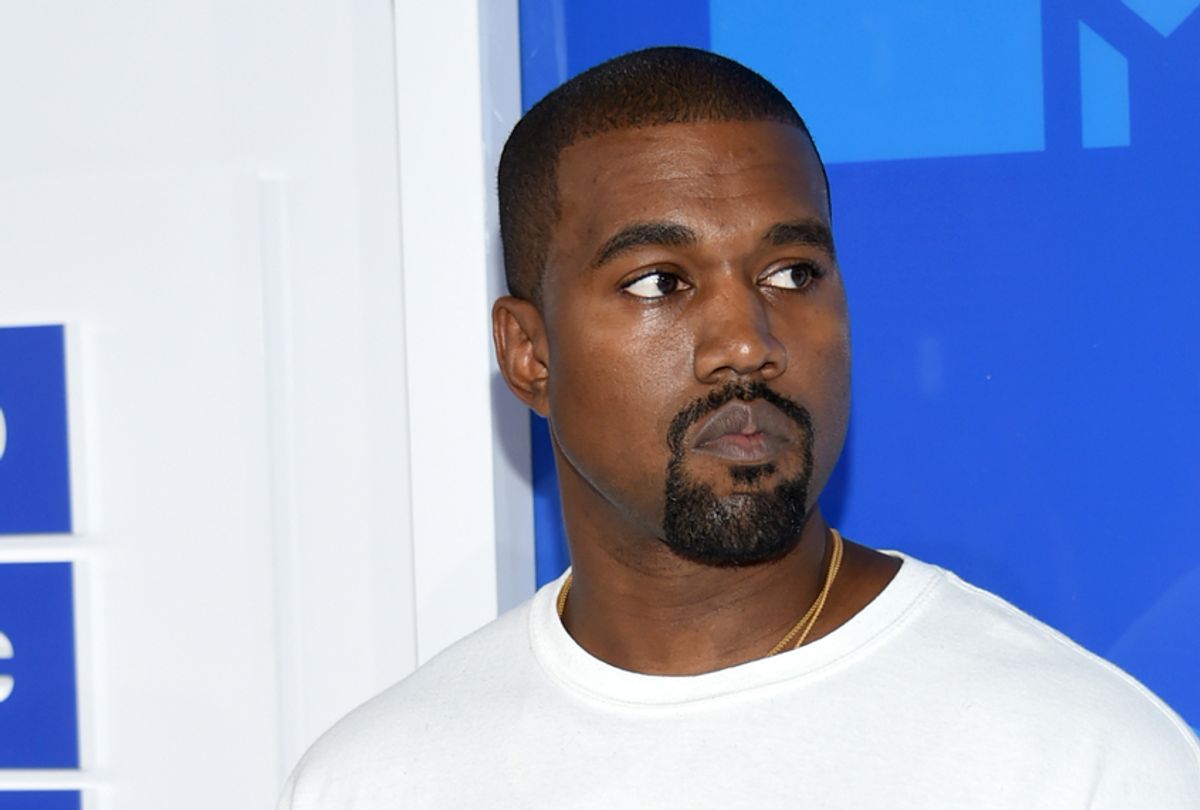 Kanye West went to TMZ's headquarters Tuesday to continue the self-described "free thinking" expression that has consumed his Twitter feed – and the conversation across social media. He told the newsroom, "When you hear about slavery for 400 years . . . For 400 years? That sounds like a choice."

West continued, "You were there for 400 years, and it's all of y'all. It's like we're mentally imprisoned."

Since the Chicago recording artist returned to Twitter mid-April, his tweets have largely ranged from trite to obnoxious and offensive. His endorsements of far-right pundit Candace Owens and President Donald Trump and the "Make America Great Again" movement seemed shallow, but had real-world implications. (In a recent article for Salon, D. Watkins asked, "Are Kanye's 'crazy' pro-Trump tweets just hype for a new album?") Trump later tweeted, "Kanye West has performed a great service to the black community . . ."

TMZ employee Van Lathan responded to West's deeply uninformed remark in the newsroom. "While you are making music and being an artist and living the life that you've earned by being a genius, the rest of us in society have to deal with these threats to our lives," Lathan said. "We have to deal with the marginalization that's come from the 400 years of slavery that you said for our people was a choice."

He added, "Frankly, I'm disappointed, I'm appalled, and brother, I am unbelievably hurt by the fact that you have morphed into something, to me, that's not real."

Rather than take in the lecture, or perhaps decide to read more on the subject, as West's comment indicates he done zero research on the myriad of ways people who were enslaved resisted daily, he doubled down on Twitter.

"To make myself clear, of course I know that slaves did not get shackled and put on a boat by free will," he tweeted. "My point is for us to have stayed in that position, even though the numbers were on our side, means that we were mentally enslaved."

Kanye added, "The reason why I brought up the 400 years point is because we can't be mentally imprisoned for another 400 years. We need free thought now. Even the statement was an example of free thought. It was just an idea."

To back up his claims of so-called mentally enslavement, he attributed a quote to Harriet Tubman: "I freed a thousand slaves. I could have freed a thousand more if only they knew they were slaves." The fact-checking site Snopes concluded that there is "no evidence a famous quote often attributed to the African-American abolitionist was actually spoken by her." The tweet has since been deleted.

CNN's Don Lemon responded to the tweets. "He's embarrassing himself actually," he said. "Because he doesn't know history . . . He doesn't read."

Lemon continued, "Just because people feel a certain way about slavery and about the African-American experience in this country, there's a reason why there's a consensus around that – because of facts."

And Lemon was not alone. A chorus of individuals were outraged by West's abhorrent statement, especially after the recent opening of The Legacy Museum: From Enslavement to Mass Incarceration in Montgomery, AL, which was built on land where enslaved people were imprisoned.

Filmmaker Ava Duvernay used photos from the museum to illuminate her disgust for West's (and R. Kelly's) words.

I’ve had it with @KanyeWest + @RKelly using the imagery of lynching as rebuttals re: their dastardly behavior. Evoking racial terrorism and murder for personal gain/blame is stratospheric in is audacity and ignorance. This is what lynching looked like. How dare they? pic.twitter.com/wfobcdjiKL

Shame on you, @kanyewest + @rkelly. If you want to have a REAL conversation about lynching, get at me. Until then, have some respect and dignity for the dead. The murdered. You’ve gone beyond embarrassing yourselves. You’re both in territory that you don’t REALLY want to be in. pic.twitter.com/LXci0F0umc

According to @MemPeaceJustice, more than 4,000 black men, women and children were hung/lynched between 1877 and 1950. @kanyewest + @rkelly are using their heinous murders in tweets and press statements. Using our ancestors’ pain as punchlines. pic.twitter.com/DHlwIF5kLc — Ava DuVernay (@ava) May 2, 2018

Historian Blair L. M. Kelley further interrogated West's point with some added details that he either didn't know or neglected to consider.

Haven’t watched the whole Kanye event today, working my way up to it. I will say, that a milder version of the “slavery is a choice” argument is made by uninformed people all the time. I’ve had young men in my courses say “they never would have enslaved me.”

People aren’t aware of the alienation of people ripped from their homes, abused, walked hundreds of miles across Africa, sometimes so far they ceased understanding the language spoken around them...

People don’t know the brutality of the slave castles were people were held on the coasts, branded still holding out hope for escape, or reconnection with loved one.... — Blair LM Kelley (@profblmkelley) May 2, 2018

Could they have survived the devastation of the middle passage, packed less humanely than animals below the deck of the ship, chained to people who were sick and dying? — Blair LM Kelley (@profblmkelley) May 2, 2018

Could they have survived being sold like a good at market by people in a foreign land speaking a foreign tongue? Could they have survived torturous work, in scraps of clothing eating the food that was unwanted? — Blair LM Kelley (@profblmkelley) May 2, 2018 Not only did my ancestors and Kanye’s ancestors survive, they managed to make a way to make a new culture, remake family and faith. And in the process, make a culture so formidable that it continues to change the world. — Blair LM Kelley (@profblmkelley) May 2, 2018

Denigrating their lives at this point for attention and spare change is such an embarrassment.

#IfSlaveryWasAChoice later became a trending hashtag on Twitter as users mocked the absurdity of Kanye's statements.