Robert Mueller already has the answer to his 49 questions

Donald Trump does stuff because he feels like it. Asking what motivated him won't get Mueller's inquiry anywhere 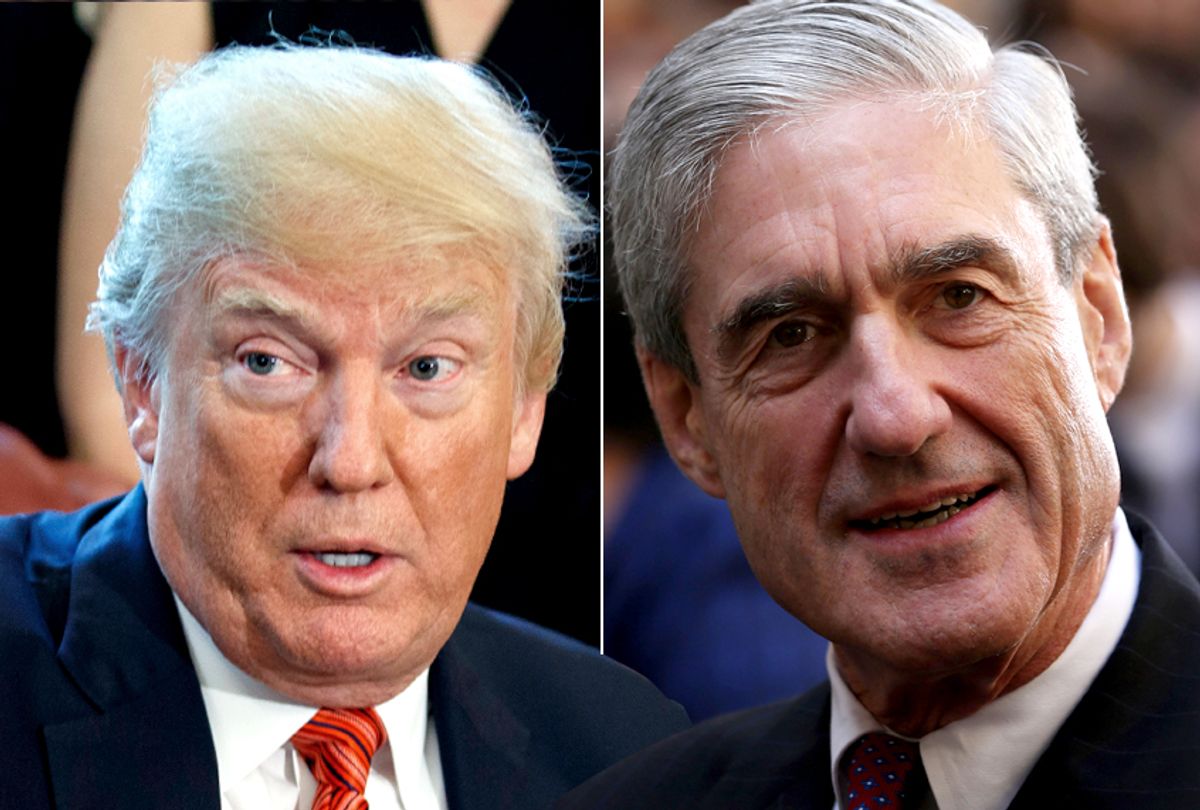 What Mueller really wants to know is “why?” Why did Flynn call Kislyak, why did Trump have Comey to dinner, why did Trump try to change Sessions’ mind about recusal?

But asking Trump why he did anything, why he thinks one thing or another, why he said something, why he tweeted anything at all is like asking a six year old boy why he played in the mud puddle.

Trump has structured his life around being able to do any goddamned thing he wanted to do and not being answerable to anyone but himself. All his life, he’s just gotten up in the morning and done stuff all day and then sat back and waited for someone else to clean up after him.

Buy the Plaza Hotel for a hugely inflated price when exactly no one else in New York City real estate was interested in the property? Sure! Let’s do it! Six years later, Trump sat down with about 50 bankers and lawyers in a conference room at the offices of the law firm Weil, Gotshal & Manges LLP. Under their guidance, he proceeded to sign over nearly everything he owned to the banks, which held over $3 billion in mortgages on Trump’s properties, $900 million of which Trump had personally guaranteed. The Plaza was sold by the banks a few years later at a loss to a Saudi prince and a Singapore hotel company for $325 million. Not a penny went to Trump, but he was spared from personal bankruptcy. Who saved Trump from himself? Fifty lawyers and bankers, all of whom wielded brooms sweeping up after the brilliant deal maker.

Trump built the Trump Taj Mahal Casino in Atlantic City for $1.2 billion in 1990. It was sold last year for $50 million, exactly four cents on the dollar, when Carl Icahn let it go to Hard Rock International. What happened in the meantime? Trump bailed out of Atlantic City in 2009. His company, Trump International Resorts was in bankruptcy. Icahn bought the company out of bankruptcy and according to the L.A. Times, lost $350 million on the deal.

Who saved Trump from himself that time? Again, it was banks and lawyers and Trump’s pal Carl Icahn. You remember Carl, don’t you? He’s the billionaire Trump appointed to be his “special advisor on regulation” who resigned from the post just before an article was to be published describing how his company, CVR Energy, would profit handsomely from changes in regulatory rules Icahn had pushed for and were scheduled to change.

Most recently, Trump’s buddy Carl somehow knew to sell about $30 million in steel stocks he owned just before Trump announced tariffs that sent the price of domestic steel companies plummeting on trader’s fears of a trade war. It’s the Trump way. Clean up after Donald Trump, and you get to clean up financially later.

When Trump took office, he continued his pattern of waking up in the morning and doing anything he pleased, usually taking to Twitter in an ongoing tsunami of fits and tantrums. By far the most costly of his Twitter tantrums were his Tweets in March of last year alleging that somehow Obama “had my wires tapped.” He did this at the crack of dawn from his mock-palace, Mar-a-Lago, in Palm Beach, even calling for the congress to “investigate” this horrible Obama scandal.

Devin Nunes, the chairman of the House Intelligence Committee, obliged by calling a hearing on the Trump allegations and inviting FBI Director James Comey. He testified that the FBI had been unable to find evidence that Obama had tapped Trump’s “wires.”. He added, helpfully, that the FBI had had the Trump campaign under counterintelligence and criminal investigation for more than nine months.

This led Trump to quickly and impetuously fire James Comey as FBI Director, which occasioned the appointment of Special Counsel Robert Mueller and the so-called Russia investigation that has bedeviled Trump ever since.

Why did Trump thumb-thwack his tweet that Obama had tapped his wires? Because he felt like it. What did he do when the nightmare of the Mueller investigation resulted? He looked around for someone to save him. I’m the president, Trump figured. I can do what I want! My Attorney General will clean up after me!

But Attorney General Jeff Sessions had to recuse himself from the Russia investigation. Trump lobbied Sessions not to recuse himself and when that failed, according to the New York Times, “the president erupted in anger in front of numerous White House officials, saying he needed his attorney general to protect him. Mr. Trump said he had expected his top law enforcement official to safeguard him the way he believed Robert F. Kennedy, as attorney general, had done for his brother John F. Kennedy and Eric H. Holder Jr. had for Barack Obama. Mr. Trump then asked, ‘Where’s my Roy Cohn?’”

Roy Cohn served as Trump’s fixer/lawyer and cleaned up after Trump during the 70’s and 80’s, including representing Trump and his father when they were charged by the federal government in a civil rights case with refusing to rent their properties to African Americans. Cohn died in 1986 of AIDS.

Trump apparently thought he could run the government like he ran the Trump Organization. He could wake up in the morning and do stupid shit all day, and then a bunch of lawyers and bankers would come along as they always did and clean up after him.

But now the “lawyers” were in the Department of Justice, and the “bankers” were in the Department of the Treasury, and he discovered to his horror that it wasn’t their job to clean up after the President of the United States. But he actually had a new Roy Cohn to protect him, in the person of Michael Cohen, who finds himself under investigation by the same Department of Justice Trump sought to use to defend himself. With Cohen sidelined, he reached for a new broom to clean up his mess, Rudy Giuliani, because it is likely that every single major white collar law firm in New York and Washington D.C. has turned him down.

Why did Trump run for president in the first place? Because he felt like it. But he’s finding that the White House lacks the one thing he’s needed his entire life. A broom to clean up after him.