Tambor admitted to yelling at co-star Jessica Walter, and Bateman and his male co-stars tried to paint it as normal 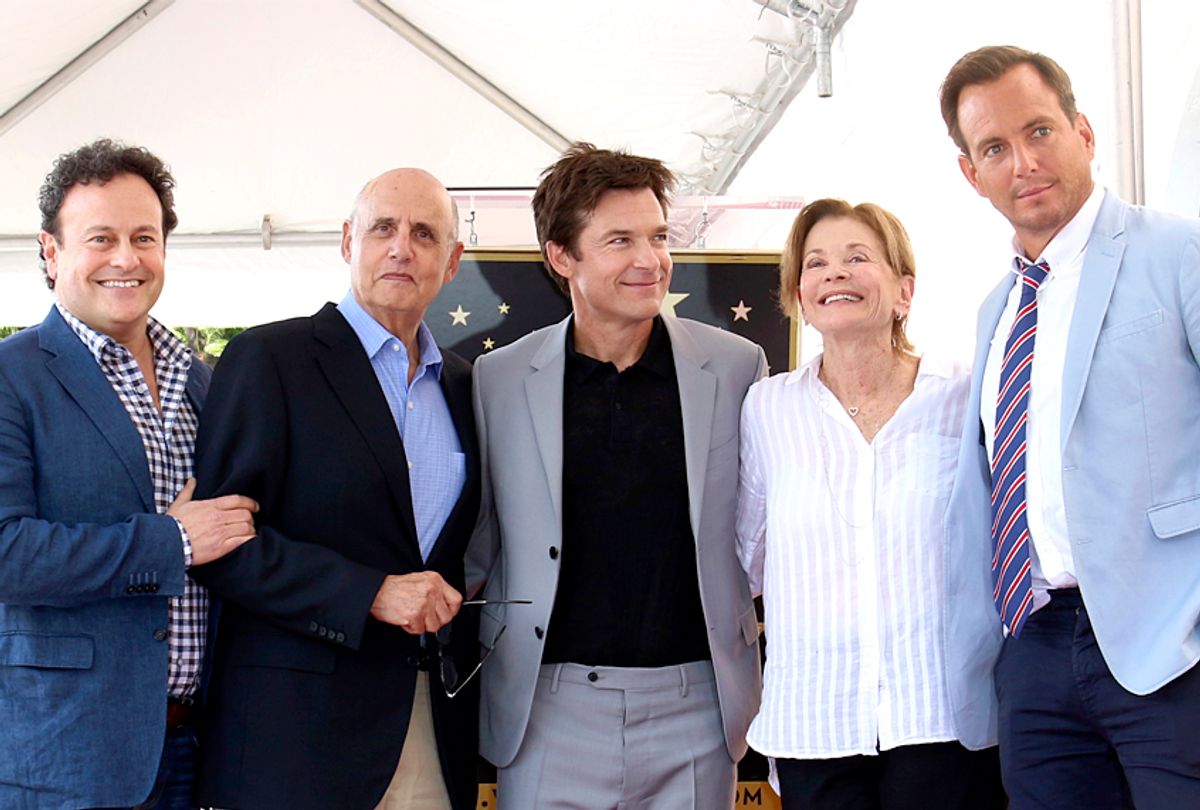 A disturbing interview with the cast of "Arrested Development" was published by The New York Times Wednesday, exposing the great lengths to which many men will go to defend toxic masculinity and abusive behavior.

Co-star Jeffrey Tambor, who plays George Bluth Sr., has been accused by two women of sexual harassment and abuse on the set of Amazon's "Transparent," and he was fired from that show after an investigation. Tambor has denied the allegations but has admitted to being "mean" and yelling and berating various staff and colleagues, including "Arrested Development" co-star Jessica Walter, who plays the caustic matriarch Lucille Bluth.

"Arrested Development's" fifth season will air on Netflix May 29. When Times writer Sopan Deb questioned if Tambor will be a part of any of the show's future seasons, co-star Jason Bateman, who plays Michael Bluth, declared, "Well, I won’t do it without you. I can tell you that."

Tambor replied, "Well thank you, that’s very, very, very sweet. I hope so. I love these people, and Netflix has been so supportive and Mitch [Hurwitz, the show creator] has been so supportive. I sent out an email to these guys and I just said, 'I’m so thankful and sorry for the distraction and you have to be asked these questions and such.' And I went much further into it with The Hollywood Reporter, and I’ve denied the allegations but the upshot is I won’t be playing Maura [his "Transparent" character] anymore. I’m going to miss that cast. I love that cast, and the answer is I would love to do 'Arrested.' I love these people."

Tambor's dismissive statement of the abuse and harassment allegations against him as a "distraction" is just the beginning.

When Deb brought up Tambor's "blowup" at Walter, which he first made public to the Hollywood Reporter, Bateman said, "Which we’ve all done, by the way."

Bateman continued to minimize the incidents, however. "This is a family and families, you know, have love, laughter, arguments."

Co-star David Cross chimed in. "You know, one thing that Jeffrey has said a number of times that I think is important, that you don’t often hear from somebody in his position, is that he learned from the experience and he’s listening and learning and growing. That’s important to remember."

Tambor said that he is continuing to reckon with his behavior. "And I profusely have apologized. Ms. Walter is indeed a walking acting lesson," he said. "And on 'Transparent,' you know, I had a temper and I yelled at people and I hurt people’s feelings. And that’s unconscionable, and I’m working on it and I’m going to put that behind me."

Bateman went to great lengths to paint Tambor's pattern of yelling at women on set as commonplace in the entertainment industry. "It is a breeding ground for atypical behavior and certain people have certain processes," he added.

Co-star Alia Shawkat interjected — it's notable that she was the only other woman present for the group interview — and said, "But that doesn’t mean it’s acceptable. And the point is that things are changing, and people need to respect each other differently."

Walter said through tears, "Verbally, yes, he harassed me, but he did apologize. I have to let it go. . . But it’s hard because honestly — Jason says this happens all the time. In like almost 60 years of working, I’ve never had anybody yell at me like that on a set. And it’s hard to deal with."

Bateman particularly seemed unfazed by Walter's pushback — that in her entire acting career, spanning six decades, she has never been berated in this way. Nearly every male co-star in the room excused Tambor's verbal abuse in some way as being normal in Hollywood, even as Walter insisted that nothing was typical about it.

"There is context," Bateman said. "What we do for a living is not normal, and therefore the process is not normal sometimes, and to expect it to be normal is to not understand what happens on set. Again, not to excuse it, Alia, but to be surprised by people having a wobbly route to their goal, their process — it’s very rarely predictable."

Cross went on to defend Tambor that there was build up. "It didn’t just come out of the blue," he said. "It wasn’t zero to 60."

On social media, people expressed disgust at the dismissive attitude Bateman and his male co-stars exhibited toward Tambor's behavior. After an overnight roasting, Bateman took to Twitter to apologize this morning in a series of tweets.

"I was so eager to let Jeffrey know that he was supported in his attempt to learn, grow and apologize that I completely underestimated the feelings of the victim, another person I deeply love," Bateman continued.

"I’m incredibly embarrassed and deeply sorry to have done that to Jessica," he said.

Bateman's apology is fine. But his initial response in the interview — where he was far from alone in excusing abusive behavior in the workplace — demonstrates the limitations of what has been described as a "reckoning" in Hollywood with the #MeToo movement. Clearly there is still a great need for more men to understand the nuances of abuse, their roles in preventing it and calling it out, and the gradations of how a toxic male culture can permeate a workplace. It can start with listening to the women in the room rather than trying to smooth these discussions over.

Given how Bateman insisted in an interview with The New York Times on explaining the supposedly unique qualities of the entertainment workplace that excuse awful behavior in the name of art to Walter, a veteran of the industry, it's unfathomable to imagine what she and other women in the cast and crew might endure from men while on set.