Moses claims it was his mother, Mia Farrow, who was the abusive one, and defends his father against assault claims 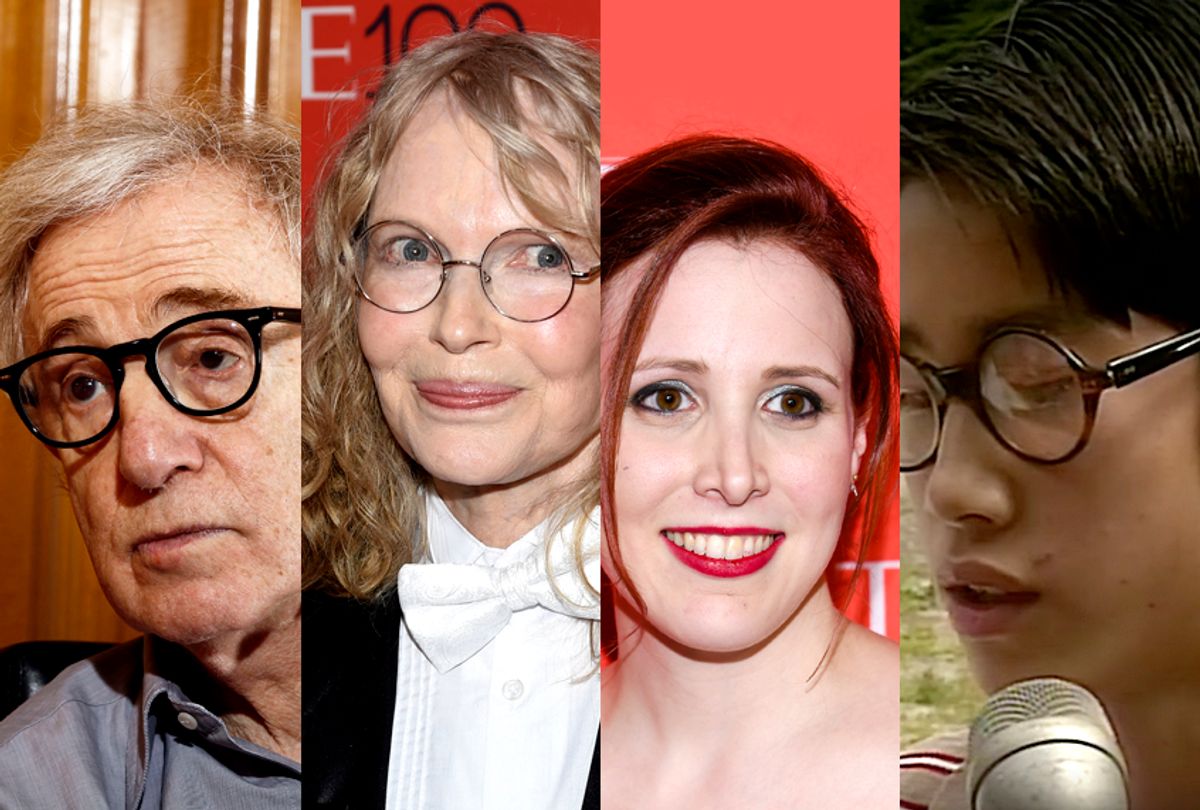 Moses Farrow, the adopted son of Mia Farrow and Woody Allen, has been one of the filmmaker's chief defenders in recent years. Allen, who was accused by his adopted daughter Dylan Farrow of molesting her when she was seven, has faced renewed scrutiny in the era of #MeToo, with several former collaborators expressing remorse for working with him.

But in an expansive, explosive blog post published Wednesday, Moses affirmed his support for his father and dismissed the sexual assault allegations. He also accused his mother of inflicting mental, verbal and physical abuse on him and his siblings. And Moses shared his own recollection of the August day in 1992, when Dylan says her father sexually abused her.

"It was important to my mother to project to the world a picture of a happy blended household of both biological and adopted children, but this was far from the truth," Moses wrote. "I’m sure my mother had good intentions in adopting children with disabilities from the direst of circumstances, but the reality inside our walls was very different. It pains me to recall instances in which I witnessed siblings, some blind or physically disabled, dragged down a flight of stairs to be thrown into a bedroom or a closet, then having the door locked from the outside. She even shut my brother Thaddeus, paraplegic from polio, in an outdoor shed overnight as punishment for a minor transgression."

Moses claims that of this abuse, "Soon-Yi was her most frequent scapegoat." He said that Farrow also brainwashed them constantly, "coaching, drilling, scripting, and rehearsing" stories until they matched what she wanted to hear. And he alleges that this is what happened with Dylan and her accusation against Allen.

Moses said that on Aug. 4, 1992, Farrow instructed him to watch Allen closely. He said, "Along with five kids, there were three adults in the house, all of whom had been told for months what a monster Woody was. None of us would have allowed Dylan to step away with Woody, even if he tried."

Moses rehashes the investigations into Allen, saying, "Mia's accusation was fully investigated by two separate agencies and charges were never brought. Mia reached the end of the legal runway after it was determined that the abuse never occurred." And he compared Allen and Dylan's accusation to the allegations against now outed sexual predators:

In this time of #MeToo, when so many movie heavyweights have faced dozens of accusations, my father has been accused of wrongdoing only once, by an enraged ex-partner during contentious custody negotiations. During almost 60 years in the public eye, not one other person has come forward to accuse him of even behaving badly on a date, or acting inappropriately in any professional situation, let alone molesting a child.

Moses does not address the claim from actress Mariel Hemingway, who says Allen tried to seduce her when she was a teenager. And according to Vanity Fair, Moses' charged blog post ignores important facts from the child molestation allegation, case and trial that are frankly damning. Investigative reporter Maureen Orth, who has written about it for over 25 years, curated "10 Undeniable Facts About the Woody Allen Sexual-Abuse Allegation" in 2014, which counters some of Moses' critical points.

Allen and Moses paint Dylan's accusation as crafted by her mother for retribution for Allen beginning a sexual relationship with Farrow's adopted daughter Soon Yi. "Mia never went to the police about the allegation of sexual abuse," Orth wrote. "Her lawyer told her on August 5, 1992, to take the seven-year-old Dylan to a pediatrician, who was bound by law to report Dylan’s story of sexual violation to law enforcement and did so on August 6."

Also, Allen has clung to the isolation of the single claim against him in his lifetime, which Moses reiterates. But Orth wrote that Farrow's instructions for Allen to never be left alone with Dylan was communicated to Moses, babysitters, etc, because "Allen had been in therapy for alleged inappropriate behavior toward Dylan with a child psychologist before the abuse allegation was presented to the authorities or made public."

Further, the judge who granted Farrow full custody of Moses, Dylan and Ronan found Allen's behavior toward Dylan to be "grossly inappropriate and that measures must be taken to protect her," Orth reported.

Moses ended his post indicating some sympathy for his sister Dylan. "Like you, I believe in the power of speaking out," he wrote. "I have broken my silence about the abuse inflicted by our mother. My healing began only after getting away from her. And what she has done to you is unbearable. I wish you peace, and the wisdom to understand that devoting your life to helping our mother destroy our father’s reputation is unlikely to bring you closure in any kind of lasting way."

Both Dylan and her brother Ronan addressed Moses' post on Twitter, attributing it to deflection. "My brother is a troubled person," Dylan wrote. "I am so sorry he's doing this."

Ronan defended the parenting of Farrow and concluded, "I believe my sister."