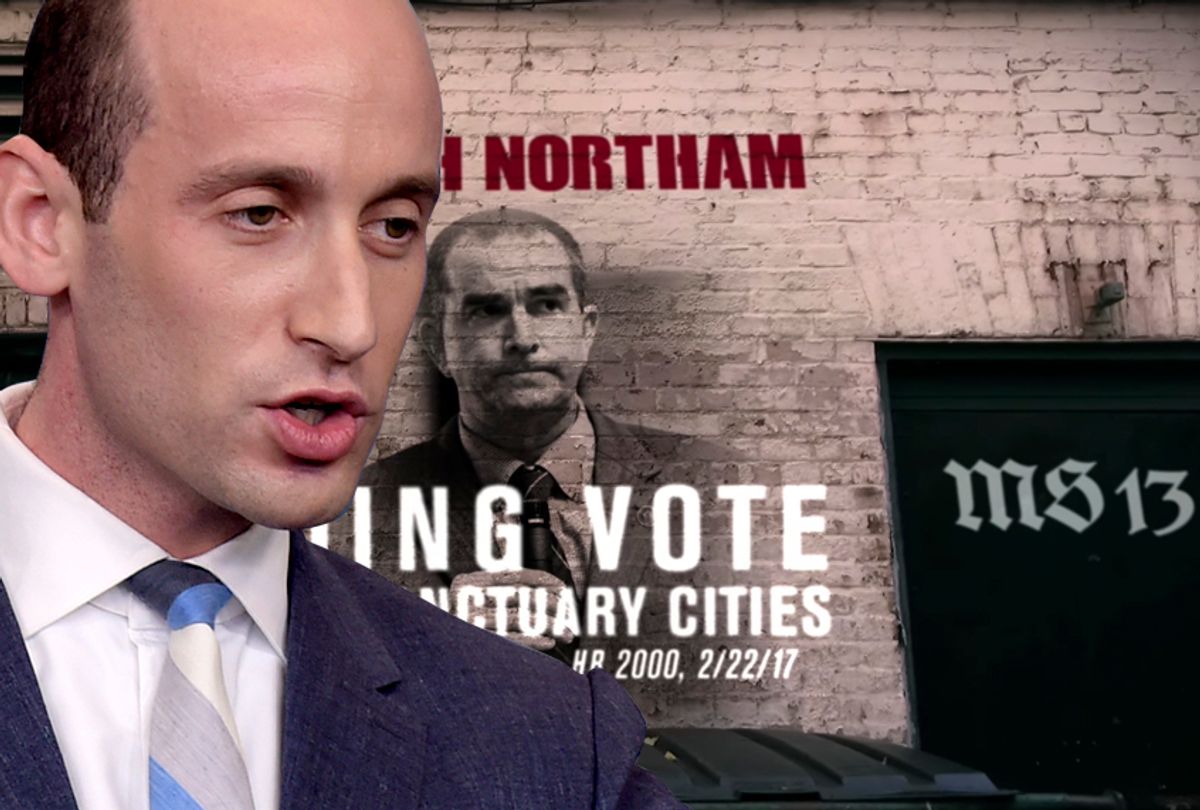 While President Donald Trump recently rejected the notion that the 2018 midterm elections are even more important to Republicans than the 2016 election, his senior policy adviser, Stephen Miller, has basically admitted that the president is so worried about this fall's elections that he plans to spend the entire campaign season vilifying immigrants.

"The big fight this summer is going to be with the open borders Democratic caucus in Congress," Miller told Breitbart News in a piece published on Thursday. "That is the fundamental political contrast and political debate that is unfolding right now. The Democratic party is at grave risk of completely marginalizing itself from the American voters by continuing to lean into its absolutist anti-enforcement positions."

Miller also attacked Democrats for what he claimed were defenses of the violent El Salvadoran MS-13 gang, with the article's author John Binder citing House Minority Leader Nancy Pelosi's comment about "the spark of divinity" as an example (he says that this was said in defense of MS-13 when, in fact, Pelosi was using it to defend all undocumented immigrants).

"You saw members of the Democratic Party and the media leaping to the defense of the gang that is engaged in the most vile, dehumanizing, and egregious actions," Miller told Breitbart.

During an interview with "Fox & Friends" that aired on Thursday, Trump seemed to confirm Miller's statements about the White House's intention to focus on immigration issues.

"A lottery is ridiculous, as you know," Trump told Brian Kilmeade. "I mean, they take people from a lottery — where you can imagine these countries are not putting their finest in that lottery — so I don't like the lottery. Chain migration is a disaster. You look at what's going on where, somebody comes in who's bad, and yet they'll have 24 members of a family who — not one of them do you want in this country. So chain migration is terrible. Lottery is terrible. We certainly would like to have it in. We have to get rid of catch-and-release. You catch them, even if you know they're a criminal, you catch them, you have to release them. By law! You have to release them. And then they go into society and they don't come back to the trial. It's crazy."

In that same interview, Trump also repeated the Breitbart line about Pelosi sticking up for MS-13 when she had not in fact done so. "The Democrats are sticking up for MS-13. You heard (House Minority Leader) Nancy Pelosi the other day, like, trying to find all sorts of reasons why they should be able to stay. These are stone cold killers — vicious killers," Trump told Kilmeade, according to CNN.

It is unclear if this tactic will ultimately prove effective for Trump. It was a notable failure last November when Ed Gillespie, the former Republican National Committee chair who ran as that party's candidate for governor of Virginia, attempted to use anti-immigrant rhetoric in his campaign against Democratic nominee Ralph Northam. As CNN reported at the time:

Gillespie's campaign has a run a series of ads attacking Northam for voting "in favor of sanctuary cities that let dangerous illegal immigrants back on the street" and linking his vote to the rise of the violent gang MS-13. Mailers from Gillespie's campaign have also attacked Northam for supporting in-state tuition, driver's licenses, and rights for undocumented immigrants who have committed crimes.

One factor possibly pushing Trump on this issue is Miller himself, who has emerged as one of the most vocal and persistent voices for anti-immigrant policies within the Trump administration. He has been particularly adamant about cracking down on unaccompanied children at the border, seeing through to completion the construction of a border wall with Mexico and pushing legislation that would sharply reduce legal immigration. He has also been known to summon Capitol Hill allies of his on the immigration issue to exert pressure on the president whenever he is perceived as wavering.

That said, Trump has also proven himself adept at using racially coded or even overtly racist rhetoric to advance his political goals. As Thomas B. Edsall explained in The New York Times on Thursday, using a quote from Boise State political scientist Stephen Utych:

Taking the morality out of it, I’ve both conducted and seen research from others that consistently shows that dehumanization “works” by making people dislike dehumanized groups, and wanting to take punitive actions against them. I think Trump has been doing this really subtly, especially over the last few months, so I definitely think this is a strategic move on his part.

A parallel can also be drawn between Trump's and Miller's rhetoric toward undocumented immigrants and a recent set of comments that Trump made during a Thursday "Fox and Friends" interview about the NFL players who were protesting racial abuse by kneeling during the national anthem.

You have to stand proudly for the national anthem. And the NFL owners did the right thing, if that's what they've done. I think the people pushed it forward; this was not me. I brought it out. I think the people pushed it forward. This country's very smart. We have very smart people. And, you know, that's something ideally could have been taken care of when it first started, would have been a lot easier. But if they did that, they're doing the right thing.

On both occasions, the common theme is that the president tries to vilify entire groups of people — undocumented Mexican immigrants, on the one hand, African-American football players on the other — through overly-simplistic statements that play to the prejudices of his base.

Dreamers talk about what it means to be an American.