The power of the celebrity pardon: Kim Kardashian visits the White House to win Alice Marie Johnson a pardon 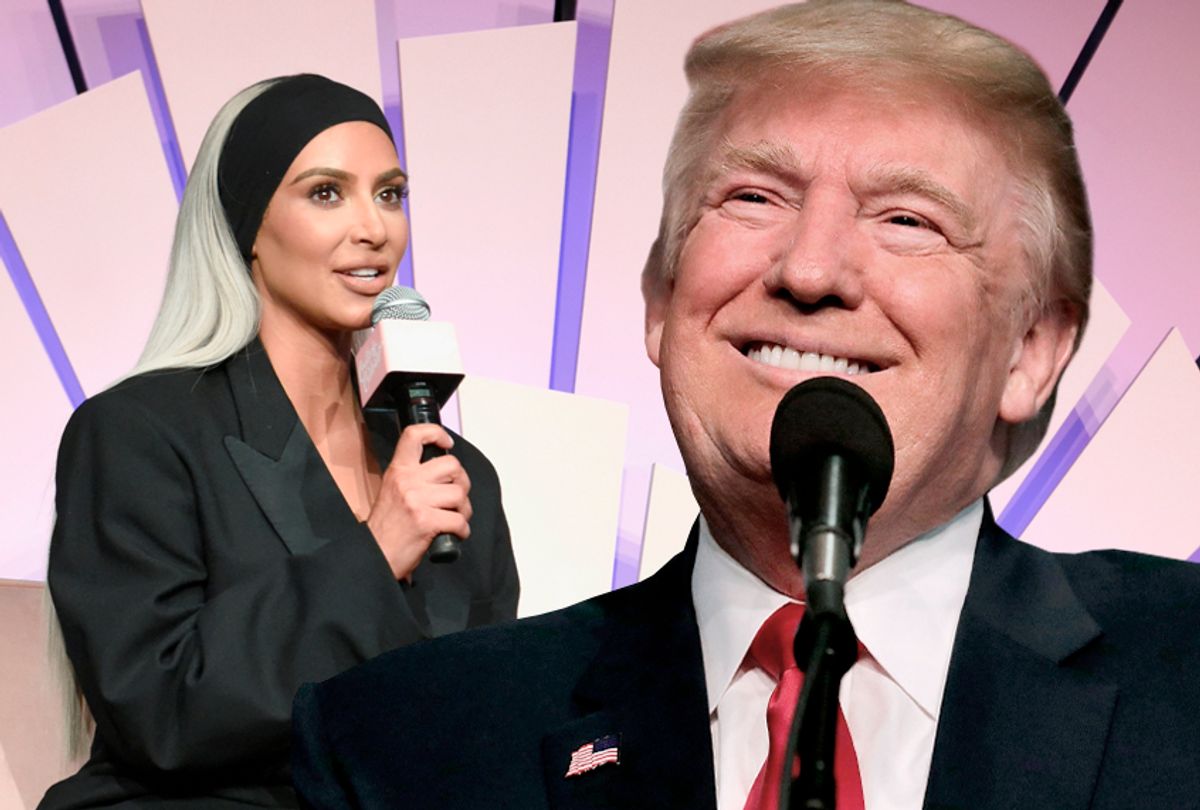 Kim Kardashian West is heading to the White House Wednesday afternoon to meet with Jared Kushner, President Donald Trump, and White House counsel to discuss prison reform, White House spokesperson Sarah Huckabee Sanders confirmed at the daily press briefing. The reality star has been advocating for a pardon on behalf of Alice Marie Johnson, a woman serving a life sentence without parole for a first-time nonviolent drug offense. Kardashian reportedly plans to ask Trump to pardon Johnson, 62, this afternoon.

In Oct. 2017, Mic published a video story featuring Johnson, who is more than 21 years into her life sentence at a federal prison in Aliceville, Ala. Kardashian West later told the publication that she came across the video on her Twitter feed and has been involved ever since, enlisting her attorney and corresponding with the White House in the hopes that senior adviser Jared Kushner, the president's son-in-law, could persuade him to pardon Johnson.  in hopes of gaining a presidential pardon for Johnson.

"I’ve been in communication with the White House and trying to bring her case to the president’s desk and figure out how we can get her out," Kardashian West told Mic. Johnson is serving a life sentence for her involvement in a drug conspiracy and clemency from the president is the only way for her to be released.

Kardashian West found an ally in the White House through Kushner, whose own father was incarcerated for 14 months for corruption charges. Kushner has been key in the First Step Act bipartisan prison bill, which overwhelmingly passed in the House last week. It includes guidelines to improve prison conditions and to reduce recidivism, though some Democrats and progressives have criticized the bill for not tackling sentencing reform. But it does contain some important measures, like the much overdue prevention of shackling pregnant woman and incarcerating individuals within 500 miles of their families. The bill also encourages participation in job-placement and drug-treatment programs and would offer some nonviolent offenders the opportunity to finish out their sentences in halfway houses or home confinement. It seems stalled in the Senate, however.

Trump has said that if the bill reaches his desk, he will sign it, during a prison reform White House summit earlier this month, which even featured the liberal activist Van Jones. Kushner says the First Step Act can open the door for sentencing reform, but former U.S. attorney general Eric Holder counters that the effort will curtail the momentum for sentencing reform because of it failure to address mandatory minimums and other harsh sentences, which are still on the books from the "tough on crime" era that ballooned the prison population.

When it comes to Johnson's case and sentence, which Kardashian West is advocating to change, it seems without sentencing reform, the First Step Act would have little effect on bringing Johnson home. And Johnson's sentence is not an outlier. The ACLU reports that more than 3,200 people are serving life sentences without the possibility of parole for nonviolent drug and property crimes. Sixty-five percent of this population is black.

Will Kardashian West engage in a meaningful discussion with Trump and Kushner about this disparity? Likely not. She appears to be dialed in on Johnson's individual case. And while it is certainly noble and important to bring an individual home, single pardons don't transform a system that has a tendency to punish people for life, whether with life sentences or perpetual surveillance.

There is currently another campaign to pardon an individual inmate that is targeting the president's favorite channel, Fox News, to get his ear.

There is validity to thinking about and fighting for short-term and long-term goals when it comes to prison reform — including entertaining the power of celebrity to influence Trump. One can recognize that the system is broken and needs to be uprooted and revamped, while also acknowledging that more immediate resolutions are imperative to improving the lives and conditions of any of the 2.2 million people in prison. But both of these mindsets require an understanding of the system as a whole. Let's hope when Kardashian West meets Trump in the West Wing today, that's what she emphasizes.