It may have been a PR ploy, but it's smart: Americans see racial tensions as getting worse under Donald Trump 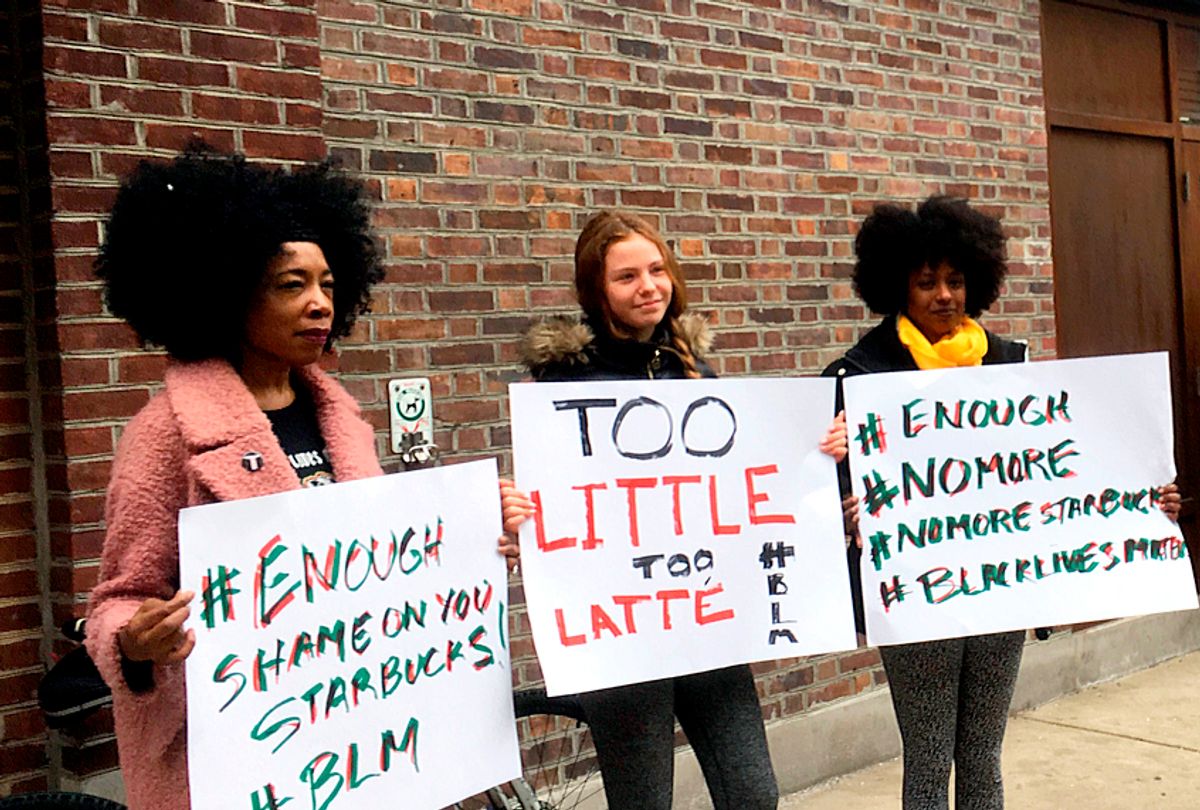 Demonstrators protest outside the Starbucks cafe in Philadelphia where two black men were arrested three days earlier for waiting inside without ordering anything. (AP/Ron Todt)
--

If anyone seriously believed America was a "post-racial" society or that a "colorblind" utopia was within reach, that illusion appears to be gone. The election of Donald Trump laid bare the naive reactions at least some politicians and commentators had immediately following Barack Obama's election as president in 2008. Of course America is not a post-racial society — and now it seems that a majority of Americans acknowledge that reality.

The poll arrived on the same day that Starbucks closed 8,000 locations nationwide to hold "unconscious bias" training, spurred on by a viral video capturing the arrest of two black men in a Philadelphia Starbucks. The men were removed from the coffee shop in handcuffs after staff called the police because the men had failed to purchase something after only two minutes.

Since the infamous Starbucks incident, there have been a string of news stories about white people calling the police on black people for doing mundane things like taking a nap in a dorm lounge, barbecuing in a park, shopping for clothes, leaving an Airbnb and golfing too slowly.

Such stories may be part of the reason why 30 percent of Americans now think race is the biggest dividing factor, a 4 percent uptick from February, according to NBC's poll.

But of course, these encounters aren't new — in fact, many high-profile incidents of police brutality stemmed from similar innocuous activities. Eric Garner was approached by police for allegedly selling loose cigarettes. Amadou Diallo was shot 19 times by police officers for reaching for his wallet. Rekia Boyd was killed by an off-duty cop for being too loud in a park.

Perhaps those stories are why 68 percent of those polled believe the police treat some groups better than others while another 72 percent of Americans think that racial discrimination against black people is a serious problem.

While Republicans often blamed Obama for further dividing America, NBC's survey points to the reality that most Americans see President Donald Trump as worsening racial tensions. Trump's presidency -- which has been categorized as the summation of white resentment — with his Muslim ban, border wall and Charlottesville equivocation — has shattered much of white America's "colorblind" facade, forcing many to reckon with America's racist fabric.

In Trump's America, the middle ground is increasingly evaporating and people and corporations must pick their side: either you condemn racism or you think white supremacists are "very fine people." ABC learned this Tuesday when Roseanne Barr tweeted a vile, racist statement about a former-Obama aide, and hours later they canceled her show (though her remark was not unprecedented by any means). In this way, Starbucks' demand for bias training for all its employees is its own way of declaring sides, which is at worst a publicity move and at best a statement that they take racism seriously.

But the real power comes from structural dismantlement. It's unlikely that a few hours of conversation with Common is going to be as impactful as their new policy that guests can sit and use the bathrooms whether they buy anything or not. This takes the authority away from individual staff members, who may harbor bias and are prone to making assumptions about customers depending on their race.

It doesn't mean racism is solved in America, but there's hope that with a more objective system, at least inside any of Starbucks' 8,000 stores, customers of all races will be left alone and respected. Now, when will the rest of America's institutions follow suit?