Kim Kardashian's Trump summit: Leave sexism out of the critiques 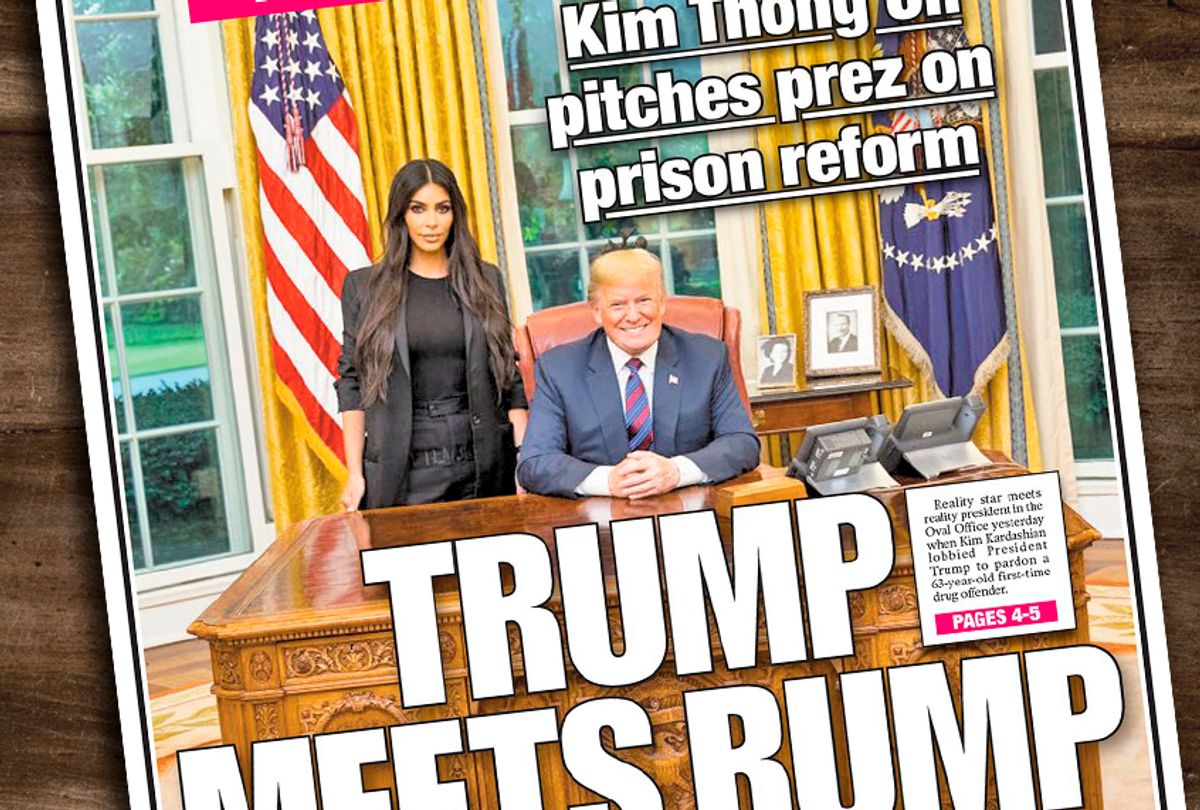 When news outlets announced that reality star Kim Kardashian West was heading to the White House Wednesday to discuss prison reform with President Donald Trump, the news was met with significant apprehension. One writer questioned if Kardashian West ever read a book about criminal justice reform. Many people on social media felt the meeting of reality stars was telling of Trump's administration and the state of American politics and celebrity culture. Most worried that the encounter would be turned into a photo opportunity for the president without meaningful change. (It was.)

But the truth is, Kardashian West has been steadily advocating over the past six months for the release of 63-year-old Alice Johnson, who is currently serving a life sentence without the possibility of parole for a first-time nonviolent drug offense.

Yet, that didn't stop the New York Post from dismissing the encounter by using the photo of Trump and Kardashian West as its cover, with three banal references to her rear: "The Other Big Ass Summit"; "Kim Thong Un pitches prez on prison reform" and "Trump Meets Rump."

Whether people supported the meeting or not, or are able to get behind Kardashian West as a valid criminal justice reform advocate, many slammed the cover for its sexism. Actress Alyssa Milano called the headline "disgusting" and described it as "unacceptable sexism," adding that "no woman deserves this."

It's disappointing that this even needs to be stated, but it is actually possible to criticize Kardashian West or the celebrity circus of Trump's administration without using sexism to do it. Scan the Twitter feeds of a handful of reliable, well-known, veteran activists, and the evidence is there.

Sherrilyn Ifill, president and director-counsel of the NAACP's legal defense fund, offered Kardashian West important points about advancing prison reform and how critical it is to move away from single pardons to fighting for structural changes. In her appeal to Kardashian West, the first thing she said was: "Thank you for your advocacy on behalf of Ms. Johnson."

This is significant, because Ifill is not mocking a reality and social media star for venturing outside of her usual terrain — a commonplace act for celebrities and one that is rarely questioned if the celebrity is white and male. Similar to the despicable right-wing taunts used against black athletes, demanding they "shut-up-and-dribble" or "stick-to-sports," these types of racist and sexist insults erase a person's humanity, asserting that they are not living, breathing, capable beings able to think critically and care about issues beyond their day jobs.

Now, Ifill also rightly explained to Kardashian West the urgency of sentencing reform, which would bar such a harsh sentence for Johnson in the first place and also help free the 3,200 other individuals serving life sentences for nonviolent drug or property crimes. While it is vital to bring individuals home, as Ifill said, the emphasis must be on "structural change that is focused on ending mass incarceration. Not one life. Millions."

I wrote yesterday that there is value to advocating for short-term and long-term goals when it comes to prison reform: recognizing that the system is broken and needs to be completely revamped and also fighting for immediate resolutions for the 2.2 million people behind bars. But both of these pathways to reform demand an understanding of the prison structure and system as a whole. Justice for millions of incarcerated people can't be equated with individual releases for a select few.

Luckily, there were many people who found it easy to question whether Kardashian West could represent this disparity to Trump without bringing her body and appearance into the critique. And the question is essential, especially after the news Thursday that Trump is granting a full pardon to Dinesh D'Souza. He made no mention of Johnson.

And what of the work of Attorney General Jeff Sessions? Any criminal justice reform policy advocate or activist entering Trump's office has to reckon with Sessions' bottom line, which includes reversing Obama era reforms, notably around harsh sentencing and penalties for some nonviolent drug violations, and reviving the catastrophic War on Drugs. This raises another legitimate point of concern over Kardashian West's visit: had she engaged with criminal justice reform activists or maybe even brought one with her to the White House, these important topics around systematic sentencing reform and the danger of Sessions may have been addressed.

Brittany Barnett, one of Johnson's lawyers, told The New York Times that the meeting with the president was "very general." She said, "We just don’t know, but it seems like the meeting was positive, and it is in President Trump’s hands now as to what he decides to do."

Johnson, who is more than 21 years into her life sentence, described Kardashian West as her "life jacket." "We’re grateful that Kim is using her platform to shine light on this issue," Barnett added. "Alice Johnson has paid her debt to society. To keep her incarcerated a day longer is morally and economically indefensible."

Hopefully, Trump frees Johnson and takes seriously America's desperate need for prison reform. There are millions of lives on the line, and ignoring the power of celebrity influence is misguided.

It can't end there, but dismissing Kardashian West from ever speaking on prison, in large part because of how she rose to fame, is not viable and feels like a blatant double standard. As Meghan McCain said on "The View" Thursday, "We should let women evolve."