John Boehner gets real about the total Trump takeover of GOP: "There is no Republican Party"

The retired House Speaker slammed the GOP: "There is no Republican Party" — only a "Trump Party" 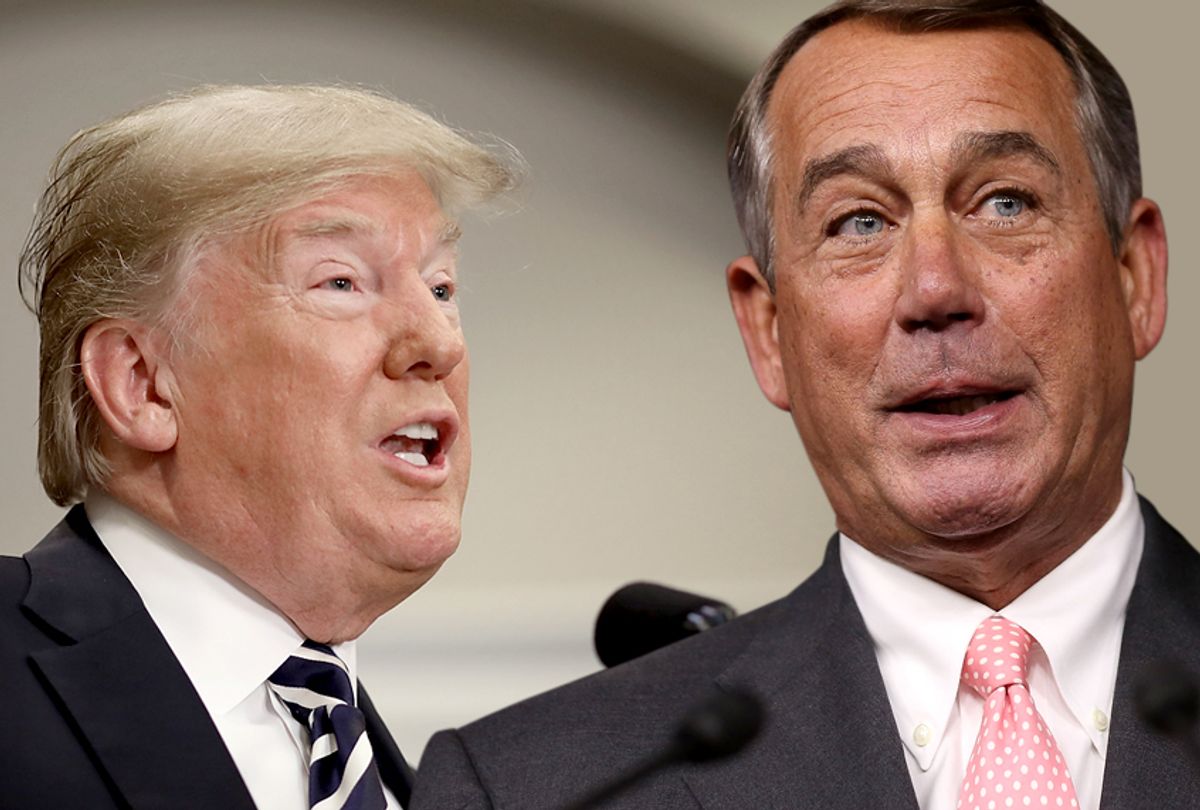 Former House Speaker John Boehner, R-Ohio, lamented Thursday that the Republican Party he though he knew for decades doesn't exist anymore, and in its place is the "Trump Party."

"There is no Republican Party. There's a Trump Party," said the Ohio Republican, who retired mid-term in 2015, on stage at the Mackinac Policy Conference in Michigan while sipping on Bloody Marys.

Boehner said "the Republican Party is kind of taking a nap somewhere" after it was taken over by President Donald Trump.

He noted that Trump had been a supporter of his, and that the two played a lot of golf together.

"Donald Trump, who I know well, was one of my supporters," said Boehner. "When I was speaker and I was having a rough week, Trump would call me, pat me on the back, cheer me up. We played a lot of golf together."

Boehner said that while he's friendly with Trump, he didn't expect him to win the 2016 presidential race.

"But president? Really? I never quite saw this," he said to laughs. "But, y'know, the guy ran, the guy won."

The former House Speaker also joked that even Trump himself didn't think he'd win, and offered a theory about first lady Melania Trump.

"I think Donald Trump promised Melania that he would not win. She didn’t have to worry about ever living in the White House. It’s probably why she doesn't look real happy every day. But, well, maybe one reason," he said.

The Ohio Republican said the 2016 presidential election was the result of not enough people voting in primaries, which led to candidates from the "fringes."

"The way to solve this is for average Democrats and average Republicans to show up in a primary and elect people more like themselves," Boehner advised, garnering to applause.

He said politics is "just not fun" anymore, and pointed to the wave of Republicans who have announced they're retiring or resigning outright, including current House Speaker Paul Ryan (WI).

"People aren't very happy. That's why you see this record number of retirements," Boehner added, referring to lawmakers. "It's just not fun."

However, he also offered a defense of Trump on policy matters. While Boehner pointed out that Trump is among the "most unusual" people to be elected as U.S. president, he said, "If you can peel away the noise and the tweets and all that, which is virtually impossible to do, but if you peel all this away, from a Republican standpoint, the things that he's doing by and large are really good things."

Boehner, who now sits on the board of a cannabis company, said he has had a shift in perspective since he left Capitol Hill, where he "unalterably opposed" marijuana legalization and LGBTQ rights.

"People can change their views," he said. "Take the whole gay rights issue. I, like tens of millions of Americans, have done this transformational shift in terms of how we view these things. You have a hard time doing this and saying things like this when you're in elected office. But I found myself looking at that situation entirely differently than I did 10 years ago. Frankly, not much different in terms of the thought process, the movement, in terms of how I look at cannabis."

At an energy conference in Houston last year, Boehner, despite being "texting buddies" with Trump, previously told attendees that the president's first several months in office were mostly a "complete disaster," and made it clear that he does not regret retiring.